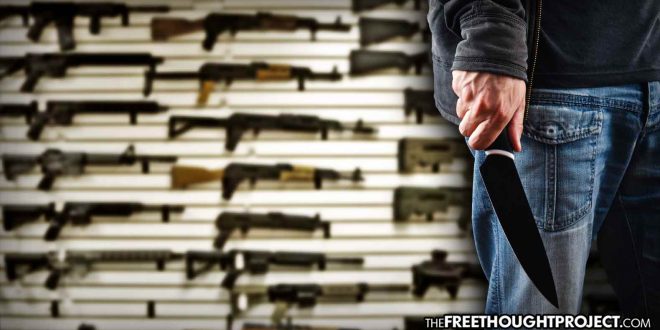 On September 30, the FBI issued a press release noting they have published their 2018 crime statistics. Most notable about the report is the fact that despite constant fear mongering by the mainstream media and the government that crime is running rampant, the number of violent crimes decreased 3.3 percent as compared to the previous year. Also contained in the report were the numbers and causes of deaths in murder cases. Although the FBI did not make the comparison themselves, when reading the data we can see the number of murders carried out with knives or cutting devices was five times higher than the number of murders carried out with rifles. This comparison is particularly important given the current gun climate in America.

Before we go on, it is important to mention that handguns were responsible for the majority of firearms deaths. It is also important to point out that all firearms deaths combined made up the majority of all murders in the United States. Of the 14,123 murders in 2018, 10, 265 of them involved firearms—a 7 percent drop from the previous year. That being said, the number of rifle deaths is extremely important given that this is the weapon most often targeted by gun grabbers.

“Hell, yes, we’re going to take your AR-15, your AK-47,” Democratic presidential candidate Beta O’Rourke recently said to a crowd in Houston, Texas. “We’re not going to allow it to be used against our fellow Americans anymore.”

But as the statistics show, it really isn’t being used against that many Americans. In fact, far more Americans are dying by knives. According to the FBI data, 1,515 were stabbed, cut, or maimed to death by a knife or other cutting instrument. This is a number 5 times higher than those killed by rifles, which sits at just 297.

What’s more, twice as many people were beaten to death with hands, fists, and feet (672) than were killed by rifles. And, nearly 150 more people (443) were bludgeoned to death with hammers and other blunt objects than killed with rifles.

The weapon most often targeted by gun grabbers appears to play a rather tiny role in the majority of murders carried out in the United States. This is in spite of Americans owning around 16 million AR style rifles.

Another important fact is that the FBI data does not differentiate as to what kind of rifle was used in the murder—meaning that it is not likely that all 297 rifle deaths were caused by AR type rifles. The FBI data includes all rifles — including bolt action, pump or lever action rifles — not just AR-15s.

If we were to compare stabbings to just AR-15 rifle deaths, that disparity would more likely than not be even greater.

Knowing these facts about rifles makes the gun grabbers calls for taking your AR-15s that much more hollow. Even if they were able to disarm all Americans of their AR-15 rifles, this would have little to no effect on the number of total murders.

Perhaps this is the reason the right has joined the left in pushing for red flag gun laws which “take the guns first” and  “go through due process second,” as Donald Trump famously said last year after the Parkland shooting.

But would grabbing guns from people deemed a risk by the state actually have any effect on mass violence? Not likely.

The elements of that legislation are mostly window dressing that would do little or nothing to prevent attacks like these. The most frequently mentioned policy, “universal background checks,” is plainly irrelevant to these particular crimes, since both the El Paso shooter and the Dayton shooter purchased their weapons legally, meaning they did not have disqualifying criminal or psychiatric records. Nor do the vast majority of mass shooters, who either passed background checks or could have. Neither requiring background checks for private transfers nor creating “strong background checks,” as President Donald Trump has proposed (perhaps referring to the same policy), would make a difference in such cases.

But what about red flag laws that take guns from people deemed a risk?

Citizens who are targeted by these laws will be deemed guilty first and only after their guns are taken, will they have a chance to defend themselves in court. This is the de facto removal of due process.

As Reuters reports, under the legislation, a family member or law enforcement officer could petition a judge to seize firearms from a person they think is a threat to themselves or others. The judge could then hold a hearing without the targeted person being present and grant a temporary order for 14 days.

Under the fifth and fourteenth amendments, due process clauses are in place to act as a safeguard from arbitrary denial of life, liberty, or property by the government outside the sanction of law.

In spite of what officials and the media claim, when a person is stripped of their constitutional rights, albeit temporarily, without being given the chance to make their own case based on what can be entirely arbitrary accusations, this is the removal of due process. And, it doesn’t work.

We’ve seen this play out before already. Earlier this year, a tragedy unfolded in California as a deranged gunman, Kevin Douglas Limbaugh, walked up on an innocent woman, officer Natalie Corona, pulled out his guns and began shooting her repeatedly until she died. Limbaugh then fired several more shots at others before turning the gun on himself and taking his own life. Had more people been nearby, Limbaugh would’ve likely carried out a mass shooting.

Limbaugh’s case is important to bring up due to the fact that — before he killed a cop — he was subject to California’s “red flag” laws in 2018. Limbaugh was given a high-risk assessment that ordered him to turn in his registered weapons to police, the only one being a Bushmaster AR-15. On November 9, Limbaugh turned in the weapon.

Despite being banned from possessing a weapon, he still obtained one illegally and used it to commit murder.

Perhaps this push for taking AR-15s from law abiding citizens is a strategical one. Despite being used in very few murders, the AR-15 is an extremely effective deterrent against tyranny.

“The most foolish mistake we could possibly make would be to allow the subjugated races to possess arms. History shows that all conquerors who have allowed their subjugated races to carry arms have prepared their own downfall by so doing. Indeed, I would go so far as to say that the supply of arms to the underdogs is a sine qua non for the overthrow of any sovereignty. So let’s not have any native militia or native police.” — Adolf Hitler, Hitler’s Table Talk, 1941-1944: Secret Conversations