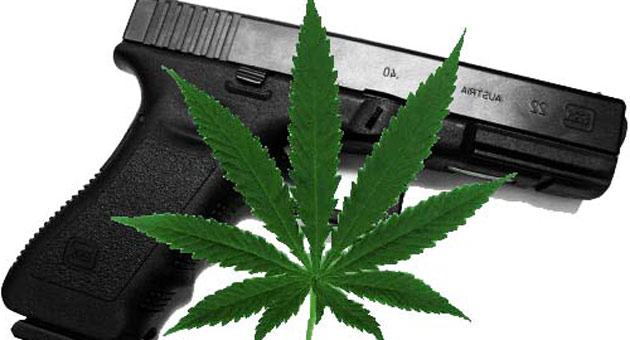 A federal appeals court has ruled that simply having a medical marijuana card will keep you from being able to own guns…even if you don’t use cannabis.

The ruling was made by the 9th Circuit Court of Appeals in the case of Wilson vs. Lynch. The case stemmed from a 2011 incident when Rowan Wilson tried to buy a gun in Lyon County, Nevada. The owner of the gun store, Frederick Hauser, turned Wilson away because he knew that she had recently obtained a medical marijuana registry card.

Wilson’s medical marijuana card was from the state Department for Health and Human services and was completely legal in the state of Nevada.

Yet, Hauser’s action of turning Wilson away was also legal. He had received a letter from the Bureau of Alcohol, Tobacco, Firearms, and Explosives, which stated that even if cannabis was being used for medicinal purposes, and was approved by the state, the user would be prevented from transporting, receiving or possessing firearms.

However, compounds found in cannabis have been proven to have a variety of medical benefits, including helping people who suffer from Crohn’s Disease and Epilepsy, and killing cancer cells. That’s a lot more than you can say about any other schedule I drugs.

Is this some old law? Nope. In fact, just last month the Drug Enforcement Administration had the opportunity to reschedule marijuana, and they refused.

While the federal government acts as if marijuana has no medicinal value, 24 states and the District of Columbia have legalized it for medical use. Four of those states and D.C. have also legalized it for recreational use, and at least five states will vote on legalization in November.

The interesting thing about the case of Wilson v. Lynch is that even though Wilson owned a medical marijuana registry card, she testified that she was not a marijuana user, and she simply pursued the card because she supports marijuana legalization.

So the federal appeals court that ruled against Wilson isn’t just determining that marijuana users can’t own guns, they are saying that anyone who has a medical marijuana registry card is not entitled to their Second Amendment rights.

This case raises a few questions, for instance – medical marijuana users can’t own guns, but the millions of Americans who abuse prescription painkillers can? And with nearly half of the states in this country recognizing the medicinal value of cannabis, why is the federal government still working so hard to prevent access to it?