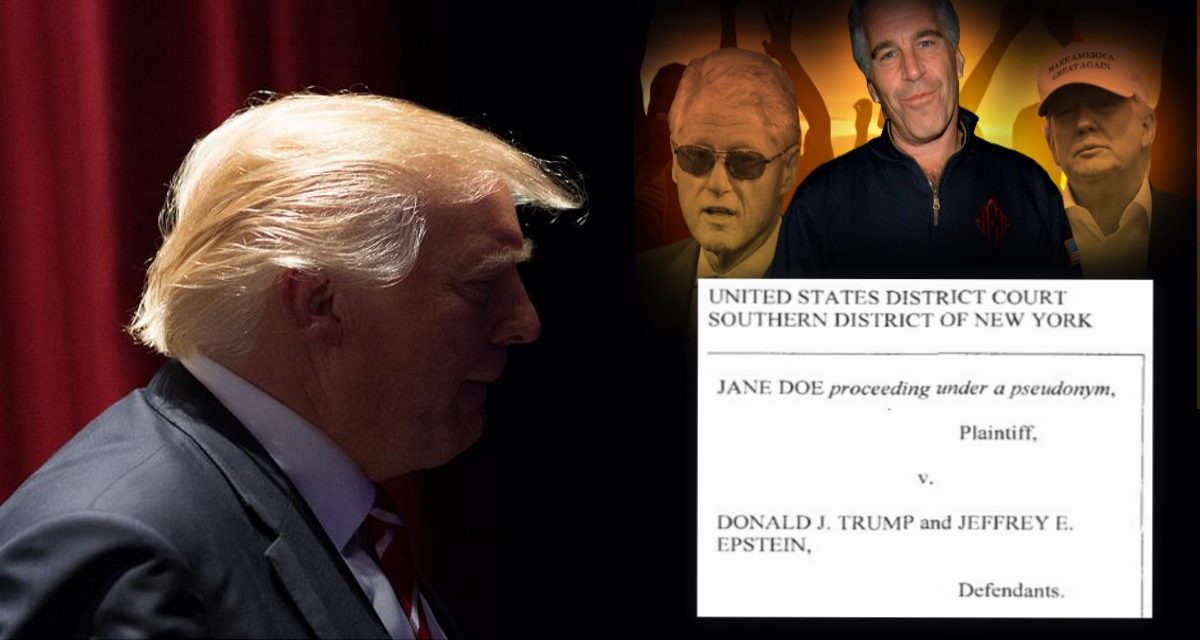 Federal Judge Ronnie Abrams, ordered a hearing to take place December 16th, 2016 in the district of New York, way after the election is over for Jane Doe’s lawsuit claiming that Trump raped her when she was 13 years old in the 1990’s, at his friend Jeffrey Epstein’s mansion.

This is the third attempt Jane Doe has made in filing her lawsuit. Trump has repeatedly denied the accusations that he raped a young girl.

In the lawsuit, a witness, identified by the alias Tiffany Doe, alleges she saw Mr Trump and billionaire-paedophile Jeffrey Epstein repeatedly rape the plaintiff Jane Doe. She also claims that she procured girls for Epstein.

The complaint claims that Epstein hired an unidentified woman to procure teenage girls to bring to his parties. Although the complaint does not identify the woman, the woman could potentially be Epstein’s mistress Ghislaine Maxwell?

The witness states, “In the 1994-95 school year, I was told by the plaintiff in Jane Doe v. Trump and Epstein (1:16-cv-04642, SDNY) that the plaintiff was subject to sexual contact by the Defendants at parties in New York City during the summer of 1994,” one of the witnesses said in a statement.

As I have said before, the allegations are categorically untrue and an obvious publicity stunt aimed at smearing my client. In the event we are actually served this time, we intend to move for sanctions for this frivolous filing.”

While one of the attorney’s representing Jane Doe, is the infamous Casey Anthony attorney, Cheney Mason. Mason is a Florida-based attorney, who has represented a number of high profile cases including Casey Anthony’s case. Casey Anthony was acquitted of murdering her 2-year old daughter, who went missing in 2008.  Despite many believing that she was guilty of killing her daughter.

In April, Jane Doe filed a similar lawsuit in federal court in California which was subsequently dismissed. An electronic summons has been issued for both Donald Trump and Jeffrey Epstein to  appear in court for a hearing December 16th, 2016. Abrams has asked for both sides to provide information to assist the Court in advancing the case to settlement or trial. With recently leaked video showing Trump saying “he doesn’t need consent.” Could the Donald really be guilty of sexually assaulting a 13 year old girl or is all this just political theater?

According to the Guardian, the man linked to the lawsuits is an old producer of the Jerry Springers show, Norm Lubow who has previously made other claims about other celebrities.

Lubow has claimed that OJ Simpson bought illegal drugs on the day Simpson’s wife was murdered, and then Also in 1998, Lubow appeared wearing a disguise in the documentary film Kurt and Courtney under the name “Jack Briggs” saying that Kurt Cobain’s widow had the Nirvana front-man killed.

Courtney Loves own father believes she killed him?

Additionally the Guardian reported that Trump has had several other women accuse him of sexual assault since the video broke of his lewd comments. In another video of Trump, Trump asks a young girl if she’s “going up the escalator.” When the girl replies, “yeah,” Trump turns to the camera and says: “I am going to be dating her in 10 years. Can you believe it?” according to CBS news.  A very strange comment to make about a little girl. Epstein’s flight manifest also show Bill Clinton took private trips on Epstein’s deemed Lolita express to Epstein’s Lolita Island.