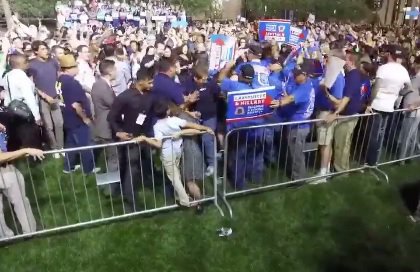 During the primaries, every altercation involving anti-Trump protesters being confronted by his supporters made national sensational headlines — but the increasingly violent supporters of Hillary Clinton are going virtually unreported.

The trend continued this week when a protester with a sign that read “Bill Clinton is a rapist” attended the Clinton rally in Las Vegas on Wednesday evening. The demonstrator was violently attacked by a mob of Clinton’s rabid supporters, which was captured on video by a local reporter.

Protester with "Rape" sign is tackled at #Clinton rally in #Las Vegas pic.twitter.com/sJvGvFnpgt

In September, a Trump supporter was savagely attacked for wearing a Make America Great Again hat at a Black Lives Matter protest.

“I’m being assaulted just for the hat I’m wearing,” Feras Jabro said of the attack.

In August, a 62-year-old Trump supporter in New Jersey was attacked for wearing a Trump t-shirt while walking down the street.

A driver who had passed by him demanded that he was white trash, then followed him into a parking lot where he exited his vehicle with a crowbar and began beating the stranger with it. The Trump supporter sustained injuries to his arms, hands, and his thighs. The driver fled the scene before police arrived.

In a video uploaded to YouTube in April, a supporter of the Democratic nominee was seen assaulting a Greenpeace activist who was attempting to ask Clinton a question.

In the footage, the activist begins to ask Clinton about her contributions from the fossil fuel industry when she is pulled backwards and a supporter of the former Secretary of State uses their forearm across her face to push her before charging in front of her.

These examples are just a small sampling of the violence being inflicted on Trump supporters as the mainstream media and the Clinton campaign continues to vilify anyone who dares not to support the Democratic nominee.

The former First Lady herself has referred to Trump supporters are racist, irredeemable, deplorables — while her husband, former President Clinton, refers to them as “standard rednecks.”

As the Gateway Pundit reported, after a 78 year-old Trump supporter punched a screaming Black Lives Matter protester at a North Carolina Trump rally in May, there were 836,000 mentions of the incident on Google.

Goodluck finding similar coverage of any of the violence perpetrated in the other direction.