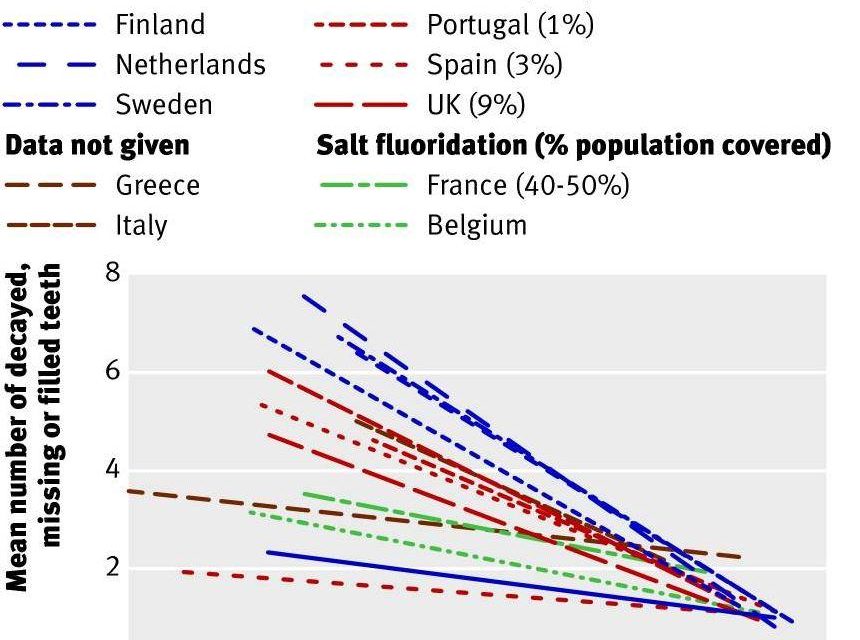 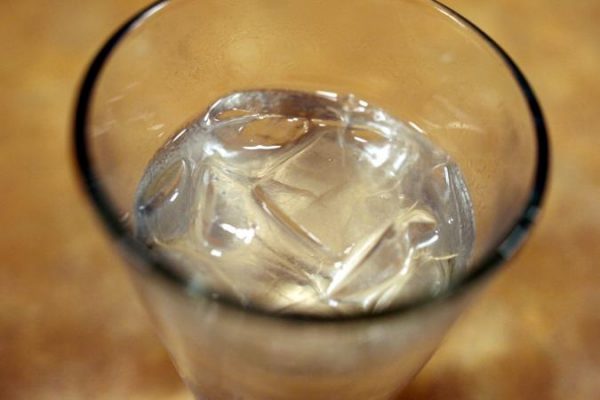 If you’re like two-thirds of Americans, fluoride is added to your tap water for the purpose of reducing cavities. But the scientific rationale for putting it there may be outdated, and no longer as clear-cut as was once thought.

Water fluoridation, which first began in 1945 in Grand Rapids, Michigan, and expanded nationwide over the years, has always been controversial. Those opposed to the process have argued—and a growing number of studies have suggested—that the chemical may present a number of health risks, for example interfering with the endocrine system and increasing the risk of impaired brain function; two studies in the last few months, for example, have linked fluoridation to ADHD and underactive thyroid. Others argue against water fluoridation on ethical grounds, saying the process forces people to consume a substance they may not know is there—or that they’d rather avoid.

Despite concerns about safety and ethics, many are content to continue fluoridation because of its purported benefit: that it reduces tooth decay. The Centers for Disease Control and Prevention’s Division of Oral Health, the main government body responsible for the process, says it’s “safe and effective.”

You might think, then, that fluoridated water’s efficacy as a cavity preventer would be proven beyond a reasonable doubt. But new research suggests that assumption is dramatically misguided; while using fluoridated toothpaste has been proven to be good for oral health, consuming fluoridated water may have no positive impact.

The Cochrane Collaboration, a group of doctors and researchers known for their comprehensive reviews—which are widely regarded as the gold standard of scientific rigor in assessing effectiveness of public health policies—recently set out to find out if fluoridation reduces cavities. They reviewed every study done on fluoridation that they could find, and then winnowed down the collection to only the most comprehensive, well-designed and reliable papers. Then they analyzed these studies’ results, and published their conclusion in a review earlier this month.

The review identified only three studies since 1975—of sufficient quality to be included—that addressed the effectiveness of fluoridation on tooth decay in the population at large. These papers determined that fluoridation does not reduce cavities to a statistically significant degree in permanent teeth, says study co-author Anne-Marie Glenny, a health science researcher at Manchester University in the United Kingdom. The authors found only seven other studies worthy of inclusion dating prior to 1975.

The authors also found only two studies since 1975 that looked at the effectiveness of reducing cavities in baby teeth, and found fluoridation to have no statistically significant impact here, either.

“From the review, we’re unable to determine whether water fluoridation has an impact on caries levels in adults,” Glenny says. (“Tooth decay,” “cavities” and “caries” all mean the same thing: breakdown of enamel by mouth-dwelling microbes.)

“Frankly, this is pretty shocking,” says Thomas Zoeller, a scientist at UMass-Amherst uninvolved in the work. “This study does not support the use of fluoride in drinking water.” Trevor Sheldon concurred. Sheldon is the dean of the Hull York Medical School in the United Kingdom who led the advisory board that conducted a systematic review of water fluoridation in 2000, that came to similar conclusions as the Cochrane review. The lack of good evidence of effectiveness has shocked him. “I had assumed because of everything I’d heard that water fluoridation reduces cavities but I was completely amazed by the lack of evidence,” he says. “My prior view was completely reversed.”

“There’s really hardly any evidence” the practice works, Sheldon adds. “And if anything there may be some evidence the other way.” One 2001 study covered in the Cochrane review of two neighboring British Columbia communities found that when fluoridation was stopped in one city, cavity prevalence actually went down slightly amongst schoolchildren, while cavity rates in the fluoridated community remained stable.
Overall the review suggests that stopping fluoridation would be unlikely to increase the risk of tooth decay, says Kathleen Thiessen, a senior scientist at the Oak Ridge Center for Risk Analysis, which does human health risk assessments of environmental contaminants.

“The sad story is that very little has been done in recent years to ensure that fluoridation is still needed [or] to ensure that adverse effects do not happen,” says Dr. Philippe Grandjean, an environmental health researcher and physician at Harvard University.

The scientists also couldn’t find enough evidence to support the oft-repeated notion that fluoridation reduces dental health disparities among different socioeconomic groups, which the CDC and others use as a rationale for fluoridating water.

“The fact that there is insufficient information to determine whether fluoridation reduces social inequalities in dental health is troublesome given that this is often cited as a reason for fluoridating water,” say Christine Till and Ashley Malin, researchers at Toronto’s York University.

Studies that attest to the effectiveness of fluoridation were generally done before the widespread usage of fluoride-containing dental products like rinses and toothpastes in the 1970s and later, according to the recent Cochrane study. So while it may have once made sense to add fluoride to water, it no longer appears to be necessary or useful, Thiessen says.

It has also become clear in the last 15 years that fluoride primarily acts topically, according to the CDC. It reacts with the surface of the tooth enamel, making it more resistant to acids excreted by bacteria. Thus, there’s no good reason to swallow fluoride and subject every tissue of your body to it, Thiessen says.

Another 2009 review by the Cochrane group clearly shows that fluoride toothpaste prevents cavities, serving as a useful counterpoint to fluoridation’s uncertain benefits. Another study that year which tracked the fluoride consumption of more than 600 schoolchildren in Iowa showed there was no significant link between fluoride ingestion and tooth decay.

Across all nine studies included in the review looking at caries reductions in children’s permanent choppers, there was evidence linking fluoridation to 26 percent decline in the prevalence of decayed, missing or filled permanent teeth. But the researchers say they have serious doubts about the validity of this number. They write: “We have limited confidence in the size of this effect due to the high risk of bias within the studies and the lack of contemporary evidence.” Six of the nine studies were from before 1975, before fluoride toothpaste was widely available.

The review also found fluoridation was associated with a 14 percent increase in the number of children without any cavities. But more than two-thirds percent of the studies showing this took place more than 40 years ago, and are not of high quality.

Nearly all these papers were flawed in significant ways. For example, 70 percent of the cavity-reducing studies made no effort to control for important confounding factors such as dietary sources of fluoride other than tap water, diet in general (like how much sugar they consumed) or ethnicity.

When it comes to fluoridation research, even the best studies are not high quality. Although this was already well-established, it doesn’t seem to be well-known.

“I couldn’t believe the low quality of the research” on fluoridation, Sheldon says. 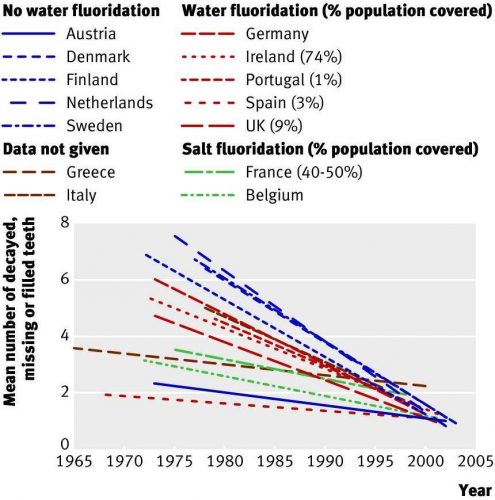 Meanwhile, dental health leaves much to be desired in widely fluoridated America: About 60 percent of American teenagers have had cavities, and 15 percent have untreated tooth decay.

This condition occurs when fluoride interferes with the cells that produce enamel, creating white flecks on the teeth. On average, about 12 percent of people in fluoridated areas have fluorosis bad enough that it qualifies as an “aesthetic concern,” according to the review. According to Sheldon, that’s a “huge number.” A total of 40 percent of people in fluoridated areas have some level of fluorosis, though the majority of these cases are likely unnoticeable to the average person.

In a smaller percentage of cases, fluorosis can be severe enough to cause structural damage, brown stains and mottling to the tooth.

Sheldon says that if fluoridation were to be submitted anew for approval today, “nobody would even think about it” due to the shoddy evidence of effectiveness and obvious downside of fluorosis.

The Cochrane review concerned itself only with oral health. It didn’t address other health problems associated with fluoride, which Grandjean says need to be researched.

Many of the Cochrane study’s conclusions conflict with statements by the CDC, the American Dental Association and others that maintain fluoridation is safe and effective. The ADA, for example, maintains on its website that “thousands of studies” support fluoridation’s effectiveness—which is directly contradicted by the Cochrane findings. The ADA didn’t immediately respond to requests for comment.

The CDC remains undeterred. “Nothing in the Cochrane review” reduces the government’s “confidence in water fluoridation as a valuable tool to prevent tooth decay in children as well as adults,” says Barbara Gooch, a dental researcher with CDC’s Division of Oral Health.

The CDC and others “are somehow suspending disbelief,” Sheldon says. They are “all in the mindset that this is a really good thing, and just not accepting that they might be wrong.” Sheldon and others suggest pro-fluoridation beliefs are entrenched and will not easily change, despite the poor data quality and lack of evidence from the past 40 years.

Derek Richards, the editor of the journal Evidence-Based Dentistry (published by the prestigious Nature group) concedes that “we haven’t got any current evidence” that fluoridation reduces cavities, “so we don’t know how much it’s reducing tooth decay at the moment,” he says. “But I have no qualms about that.” Richards reasons that because fluoridation may help reduce cavities in those who don’t use toothpaste or take other preventative measures, including many in lower socioeconomic groups, it’s likely still useful. He also argues that there’s no conclusive evidence of harm from fluoridation (other than fluorosis), so he doesn’t see a large downside.

But most scientists interviewed for this article don’t necessarily think fluoridation’s uncertain benefits justify its continuation without more stringent evidence, and argue for more research into the matter.

“When you have a public health intervention that’s applied to everybody, the burden of evidence to know that people are likely to benefit and not to be harmed is much higher, since people can’t choose,” Sheldon says. Everybody drinks water, after all, mostly from the tap. “Public health bodies need to have the courage to look at this review,” says Sheldon, “and be honest enough to say that this needs to be reconsidered.”