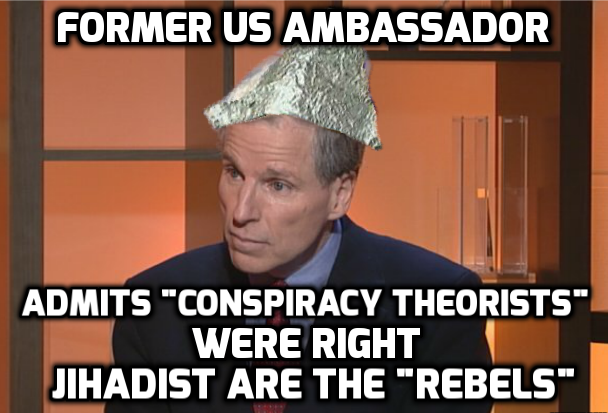 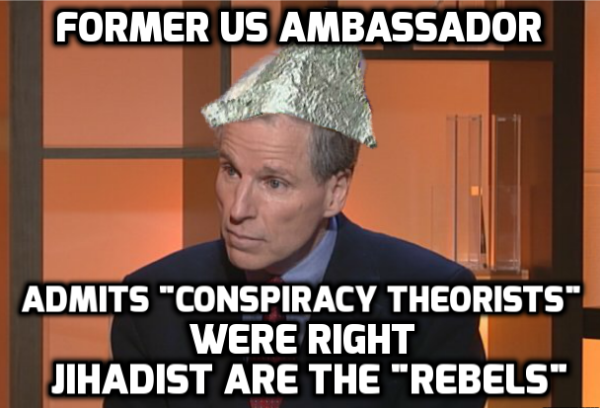 Death squad operative Robert Ford has turned a number of heads recently with his surprising indictments of the so-called “moderate” rebels operating in Syria. Ford, who has long been one of the most vocal cheerleaders of the jihadists – having played a crucial role in organizing and arming them early on – is now openly admitting much of what many in the alternative media have been saying since the beginning of the crisis in 2010 – that al-Qaeda, Nusra, and other jihadist forces make up the overwhelming majority of the alleged “rebellion.”

Of course, there never was anything remotely “moderate” about any of the “rebels” operating under Ford’s tutelage or NATO’s direction. Despite the propaganda necessities of NATO and the US, a “moderate rebel” has yet to have been produced for analysis.

Ford’s willing deceitful adherence to the State Department line of the existence of such ephemeral and mysterious beings known as “moderate rebels” notwithstanding, his admission of the fact that jihadists and al-Qaeda fighters make up the majority of fighters in Syria is something that alternative media journalists and researchers have been labeled as conspiracy theorists for suggesting for years. After having been badgered and mis-labeled by mainstream media propagandists for nearly five years, the establishment may now freely admit what the alternative media analysts have known and reported the entire time.

Ford today sounds like a different person from the optimist who only six months ago wrote an essay in Foreign Policy that began: “Don’t believe everything you read in the media: The moderate rebels of Syria are not finished. They have gained ground in different parts of the country and have broken publicly with both the al Qaida affiliate operating there and the jihadists of the Islamic State.”