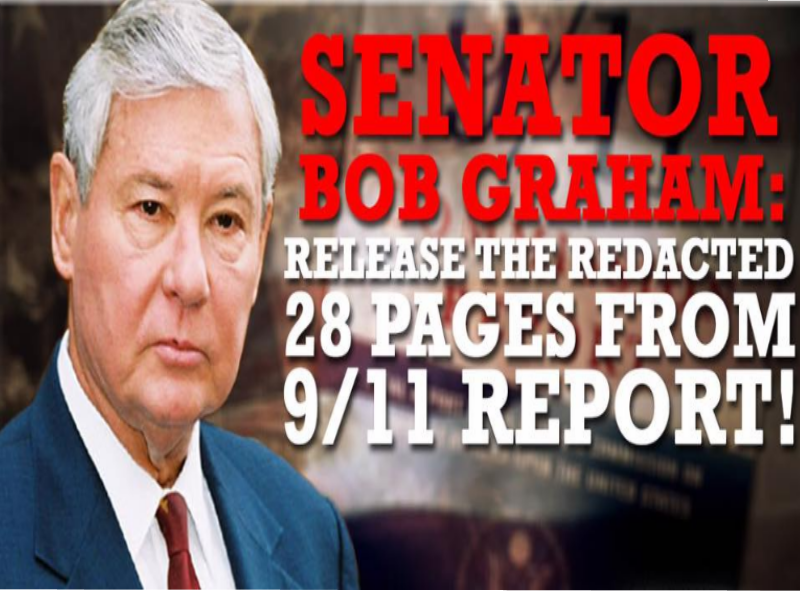 There is a document, 28 pages in length, that’s locked away in the congressional vaults, guarded by armed security — it gives great details on the terrorist attacks that happened on 9/11.

Former Democratic senator who investigated the 9/11 terrorist attacks says he believes the hijackers had support from within the U.S. to carry out their deadly plot.

Bob Graham, chairman of the Senate Select Committee on Intelligence and co-chair of the bipartisan joint congressional inquiry into the attacks, reported to 60 Minutes that the investigation revealed wealthy Saudi Arabian individuals and charity networks provided financial aid the terrorists.

Some of those conspirators were living in the U.S., Graham said — including two Saudi nationals who helped the hijackers find housing and contacts who arranged for their flight training

However, the 28-pages have been conveniently avoided by those in the mainstream media — until now.

On Sunday night’s episode of 60 Minutes, former Florida governor, U.S. Senator and onetime chairman of the Senate Select Committee on Intelligence, Bob Graham implicated the US ally on national television.

Until now, anyone who questioned the highly suspect ‘official’ narrative on the 9/11 attacks has been labeled a conspiracy theorist or a kook. But when current and former members of Congress, U.S. officials, and the 9/11 Commissioners themselves call for the release of these 28-pages, which tells a different story of what happened that fateful day — people listen.

CBS reports Graham and his Joint Inquiry co-chair in the House, former Representative Porter Goss (R-FL) — who went on to be director of the CIA — say the 28 pages were excised from their report by the Bush Administration in the interest of national security. Graham wouldn’t discuss the classified contents, but says the 28 pages outline a network of people he believes supported hijackers in the U.S. He tells Steve Kroft he believes the hijackers were “substantially” supported by Saudi Arabia. Asked if the support was from government, rich people or charities, the former senator replies, “all of the above.”

The following script is from “28 Pages” which aired on April 10, 2016. Steve Kroft is the correspondent. Howard Rosenberg and Julie Holstein, producers.

Steve Kroft: And you believe that the 28 pages are crucial to this? Understand…

Bob Graham: I think they are a key part.

Former U.S. Senator Bob Graham has been trying to get the 28 pages released since the day they were classified back in 2003, when he played a major role in the first government investigation into 9/11.

Bob Graham:  “I remain deeply disturbed by the amount of material that has been censored from this report.”

At the time, Graham was chairman of the Senate Select Committee on Intelligence and co-chair of the bipartisan joint congressional inquiry into intelligence failures surrounding the attacks. The Joint Inquiry reviewed a half a million documents, interviewed hundreds of witnesses and produced an 838 page report — minus the final chapter which was blanked out — excised by the Bush administration for reasons of national security.

However; Graham would not discuss the classified information in the 28 pages, he will say only that they outline a network of people that he believes supported the hijackers while they were in the U.S.

Steve Kroft: You believe that support came from Saudi Arabia?

Steve Kroft: And when we say, “The Saudis,” you mean the government, the–

Bob Graham: All of the above.

Graham and others believe the Saudi role has been soft-pedaled to protect a delicate relationship with a complicated kingdom where the rulers, royalty, riches and religion are all deeply intertwined in its institutions.

Porter Goss, who was Graham’s Republican co-chairman on the House side of the Joint Inquiry, and later director of the CIA, also felt strongly that an uncensored version of the 28 pages should be included in the final report. The two men made their case to the FBI and its then–director Robert Mueller in a face-to-face meeting.

Porter Goss: And they pushed back very hard on the 28 pages and they said, “No, that cannot be unclassified at this time.”

Steve Kroft: Did you happen to ask the FBI director why it was classified?

Porter Goss: We did, in a general way, and the answer was because, “We said so and it needs to be classified.”

Goss says he knew of no reason then and knows of no reason now why the pages need to be classified. They are locked away under the capital in guarded vaults called Sensitive Compartmented Information Facilities, or SCIFs in government jargon. This is as close as we could get with our cameras — a highly restricted area where members of Congress with the proper clearances can read the documents under close supervision. No note-taking allowed.

Tim Roemer: Look, the Saudis have even said they’re for declassifying it. We should declassify it. Is it sensitive, Steve? Might it involve opening– a bit, a can of worms, or some snakes crawling out of there? Yes. But I think we need a relationship with the Saudis where both countries are working together to fight against terrorism. And that’s not always been the case. Commission members say their findings in those 28 pages would certainly surprise many Americans — but most of them agree that they should be declassified.

According to an article on Geopolitics.co the pages were ultimately redacted because the investigation would eventually expose the culpability of the British Monarchy – established by following the money from the operatives to the House of Saud  coming from the Queen’s royal bank account.

The Queen’s bank account is of course replenished every now and then by the biggest bankers of all, the Rothschild family, who work with the Jesuits running the Roman Vatican Empire behind the scenes to arrange all the pieces of the global terror ponzi scheme which is beginning to fall apart.

One thing for certain is that for nearly 16 years, the 28 pages have been locked away in a secret vault. Only a small group of people have ever seen them, We believe, along with the Senator Graham and the families of 9/11 victims that they should be declassified.

And then there’s this: a U.S. academic has alleged the 15 Saudi ‘hijackers’ were CIA agents working for the United States.