Forty-three veterans of an elite Israeli military intelligence unit blow the whistle on the inhuman, Stasi-like methods employed by Israel against vulnerable Palestinians to bribe, coerce and blackmail them into conspiring in their own oppression. The goal is totalitarian control. 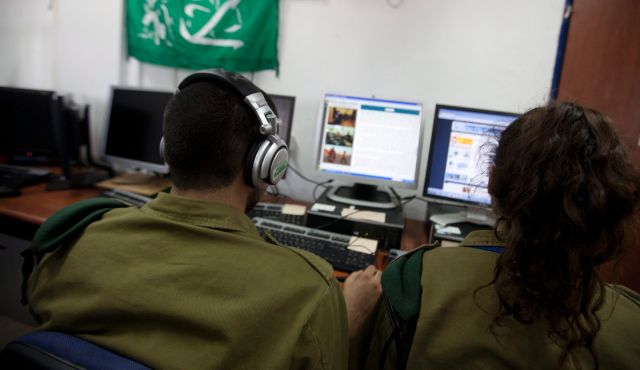 A letter signed by 43 veterans of an elite Israeli military intelligence unit declaring their refusal to continue serving the occupation has sent shockwaves through Israeli society. But not in the way the soldiers may have hoped.

Unusually, this small group of reservists has gone beyond justifying their act of refusal in terms of general opposition to the occupation.

Because of their place at the heart of the system of control over Palestinians, they have set out in detail, in the letter and subsequent interviews, what their work entails and why they find it morally repugnant.

Veterans of the secretive Unit 8200, Israel’s NSA, say it is drummed into new intelligence recruits that no order is unlawful. They must, for example, guide air strikes even if civilians will be harmed.

The 43, all barred by Israeli law from identifying themselves publicly, say they avoided serving during Israel’s latest attack on Gaza, fearing what would be permitted. But their concerns relate to more than the legality of military attacks.

In a telling admission, one reservist said he first questioned his role after watching The Lives of Others, a film depicting life under the Stasi, East Germany’s much-feared secret police. The Stasi are estimated to have collected files on five million East Germans before the Berlin Wall fell.

According to the refuseniks, much Israeli intelligence gathering targets “innocent people”. The information is used “for political persecution”, “recruiting collaborators” and “driving parts of Palestinian society against itself”.

The surveillance powers of 8200 extend far beyond security measures. They seek out the private weaknesses of Palestinians – their sex lives, monetary troubles and illnesses – to force them into conspiring in their own oppression.

“If you required urgent medical care in Israel, the West Bank or abroad, we looked for you,” admits one.

An illustration of the desperate choices facing Palestinians was voiced by a mother of seven in Gaza last week. She told AP news agency that she and her husband were recruited as spies in return for medical treament in Israel for one of their children. Her husband was killed by Hamas as a collaborator in 2012.

The goal of intelligence gathering, the refuseniks point out, is to control every aspect of Palestinian life, from cradle to grave. Surveillance helps confine millions of Palestinians to their territorial ghettoes, ensures their total dependence on Israel, and even forces some to serve as undercover go-betweens for Israel, buying land to help the settlements expand. Palestinians who resist risk jail or execution.

The implication of these revelations is disturbing. The success of Israel’s near half-century of occupation depends on a vast machinery of surveillance and intimidation, while large numbers of Israelis benefit directly or indirectly from industrial-scale oppression.

Unlike their predecessors in Israel’s tiny refusal movement, the soldiers of 8200 have been uniquely exposed to the big picture of occupation. They have seen its dark underbelly – and this gives their protest the potential to be explosive.

Some in the international media have framed the soldiers’ bravery as a sign of hope that Israelis may be waking to the toll of the occupation on Palestinians and the health of Israeli society.

The dissenters of 8200 believed the same: that their confessions might lead to national soul-searching, investigations into their allegations, and mass protests like those that greeted news of Israeli war crimes in Lebanon in the early 1980s. They could not have been more mistaken.

The head of the opposition, Isaac Herzog, of the supposedly leftwing Labor party, characterised their protest as “insubordination”, while Smola, a party established this month to revive the left, called the soldiers’ act “evil”.

In the Israeli media the group were dismissed as deluded eccentrics, “trippy” losers and “spoiled brats”. If there is a constituency of concern among the public, it has kept stoically quiet.

Revealingly, Herzog was himself once a senior officer in 8200. He must have been party to the same ugly secrets but used his political influence to shield the system rather than blow the whistle.

It seems that when the barbarity of the occupation is at its most transparent, when it is hardest for Israelis to avert their gaze, they simply shut their eyes instead.

The wall-to-wall condemnation of the refuseniks mirrored Israelis’ almost-universal support for the recent attack on Gaza, even as they learnt of mounting Palestinian civilian casualties.

Over the past decade, one intelligence veteran lamented: “We’ve seen a decline in how much the soldiers and the Israeli public care that innocent people are dying.” That observation was firmly verified this summer in Gaza.

Thousands of Israelis who have passed through 8200 did not sign the letter, noted a commentator. Another pointed out that 43 dissenters were “insignifcant” compared to the 600,000 who serve in the military or the reserves.

None of this suggests Israelis are uniquely evil. Rather, it indicates how deeply dysfunctional their society has become – as one might expect after years of being collectively complicit in the oppression of another people.

Netanyahu is only too aware how to keep the Israeli public compliant. Last week he warned of an apparently alarming new threat: Hamas had responded to the operation in Gaza by waging “cyber attacks” on Israel, aided by Iran.

The insinuation was clear. Unit 8200 is all that stands in the way of the Jewish state’s destruction by the mullahs of Tehran. Those who undermine intelligence work endanger Israel’s survival.

Netanyahu knows it is a message that will find favour with Israelis. Their military is no callous and brutal leviathan. And they can continue to sleep easy at night, still history’s victims.

A version of this article first appeared in the National, Abu Dhabi.