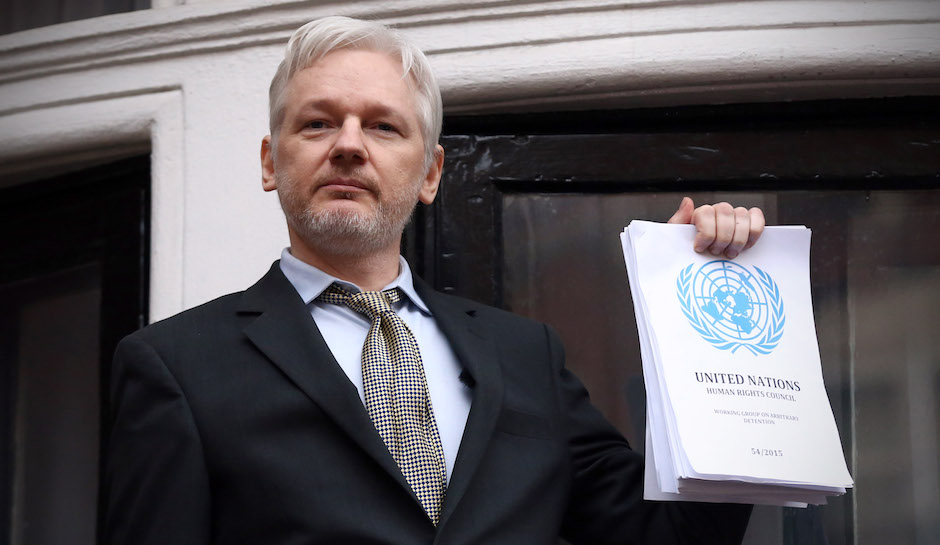 Wikileaks founder Julian Assange has released the statement that he gave to Swedish prosecutor Marianne Ny concerning the rape accusations against him. Assange’s statement includes text messages that prove that Assange was framed not by one of the women – but by the police.

Assange released the 19-page statement to the public that he gave the Swedish prosecutor to clear his name because “I want people to know the truth about how abusive this process has been.”

In a cover letter Assange wrote that was released by Hanna J., a doctoral candidate in international law who is also an editor at justice4assange.com, the Wikileaks founder detailed the horrific process he faced:

“Six years ago today, on 7 December 2010, I was handcuffed and locked into Wandsworth prison by order of a Swedish prosecutor, Marianne Ny. I had not and still have not been charged with an offense. The claimed grounds for my arrest and extradition without charge were so that Ny could question me. But it was not until six years later – three weeks ago – that I was questioned for the first time. I have decided to release my responses. But first, some background,” Assange wrote.

“I am Australian. I am not Swedish. I do not speak Swedish. I have never resided in Sweden.”

“I am entirely innocent. I was already cleared of exactly this allegation in 2010 by the Chief Prosecutor of Stockholm, Eva Finne, who closed the case.”

Assange blames the Pentagon for resurrecting this case. “During the height of the Pentagon’s conflict with me the following month, the allegation was resurrected by the current prosecutor, Marianne Ny. It was immediately seized on to extinguish my freedom of movement and harm my reputation,” Assange stated.

Assange alleges that the Swedish prosecution authority and Ny broke it’s own rules and the law committing mass defamation without even bothering to take a statement from him at the time.

He has now provided a statement that an astronomical  six years later is the first time he has been given a chance to defend himself against the now-provably false accusations.

“Without even bothering to take my statement, the Swedish Prosecution Authority broke its own rules and released my name to a tabloid newspaper. Prosecutor Ny went on to produce more than 40 press releases and press conferences about me. As a result, to this day more than half a million webpages falsely conflate my name with the word ‘rape,'” Assange added. “In February this year the United Nations found that Prosecutor Ny has caused Sweden and the UK to breach their international human rights obligations. The UN found that her actions are subjecting me to “cruel, inhuman and degrading treatment” and an unlawful deprivation of liberty which must immediately cease.”

Assange also noted in his letter that despite no charges being filed that his basic human rights were again violated when his Swedish lawyer was excluded from the room. “She has for more than six years refused to take my statement during which time she has done nothing to pursue the preliminary investigation,”Julian Assange, said speaking of Swedish prosecutor Marianne Ny. “Finally, as a result, last month Marianne Ny sent a deputy and a policewoman to London to question me over two days, but – true to form – my Swedish lawyer was excluded from the room in yet another breach of my basic rights.”

U.S. prosecutors are convening according to Assange, and desperately want to see him and seven other people who run Wikileaks behind bars.

“In Alexandria, Virginia, a Grand Jury has been meeting behind closed doors for the past six years under case number 10GJ3793 to explore ways to imprison me and seven others,” Assange said.

For the first time Assange has provided the evidence – text messages that were allegedly taken from his sexual partner’s cell phone identified only as S.W. that clearly show that the woman had agreed to have consensual sex with him.

When Assange visited Sweden in 2010 he said a young woman came to hear him lecture, then joined a small group having lunch with him. Assange said S.W. sent a text message to a friend on Aug. 14 that read: “I want him. I want him.”

Assange said the woman, who was an employee of the National Museum, took him to “an IMAX film that was playing, where she kissed me and placed my hands on her breasts.” Two days later, on Aug. 16, Assange said the woman “invited me to her home” and “made it very clear that she wanted to have sexual intercourse.”

The next morning, S.W. texted her friend “JA did not want to use a condom.”

On Aug. 20, the woman called Assange from a hospital and “asked him to come take a test for an STD so that she wouldn’t worry about infection,” he wrote.

“She said that it was normal in Sweden to go to the police to get advice about STDs and that if I didn’t come down to the hospital she would go to the police to ask whether I could be forced to get tested,” Assange wrote.  He then responded that he found “her mention of the police strange and threatening.”

“I told her I found her mention of police strange and threatening,” Assange said.

Assange said he was “certain she expressly consented to unprotected sex” and that a subsequent text message she sent to a friend indicated he had not forced himself upon her while she slept.

“I was half asleep,” S.W. texted on Aug. 18 just two days after they had sex, Assange said.

SW “while at the police station, wrote that she ‘did not want to put any charges on Julian Assange’ but that ‘the police were keen on getting their hands on him,’ ” Assange quoted the texts as saying, adding on that the woman was shocked when they arrested him because she “only wanted him to take a STD test.”

Elisabeth Massi Fritz the lawyer for S.W told the Swedish TT news agency that “Assange seems desperate” and “the only thing I can say is that Assange has low credibility and we will prove this when we prosecute.”

She further noted that “Assange did not mention in his statement that he reportedly had sex with a second Swedish woman during the same period, and that she went to police alleging Assange had resisted wearing a condom.”