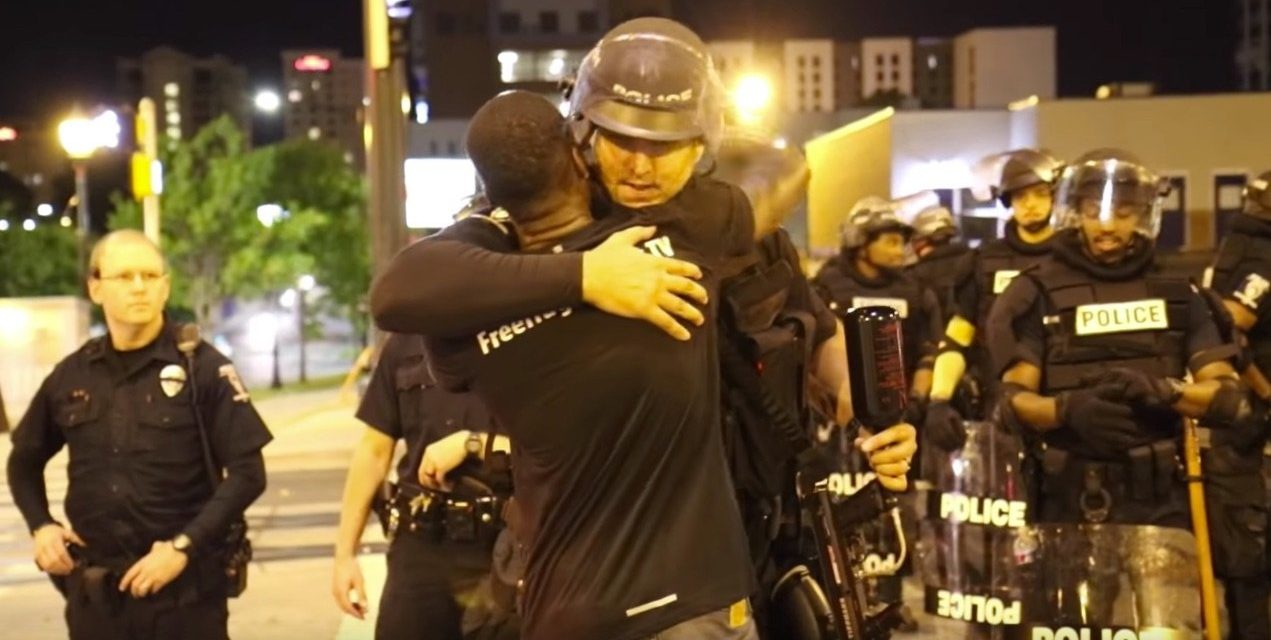 The now-viral video begins with Ken E. Nwadike Jr., a black man wearing a #FreeHugs t-shirt embracing a white Charlotte, police officer, who thanks him for remaining peaceful.

In the background, Black Lives Matter protesters immediately become rowdy over this man’s action, cussing and complaining and accusing him of not being black.

WATCH: Man gets cursed out by protesters for hugging #Charlotte police officers pic.twitter.com/86UdZL1Q2a

Nwadike embraces another African-American police officer as one man yells  “You a pussy, nigga!”

“It’s not even like that, it’s about staying neutral,” replies Nwadike.

An irate protester begins screaming “No my nigga these motherfuckers aren’t stay neutral.” Nwadike responds, “Did he kill somebody?” pointing at the white officer.

“Did he kill somebody?” he repeats, pointing at the African-American officer.

The irate protester then continued yelling back. “Mind you that’s my mother fucking family that squad killed bitch.”

The protestor makes a hypocritical point – Black Lives Matter activists complain about stereotyping all black people as criminals, but are perfectly fine to stereotype all cops as bad, racist murderers or pigs.

“Look if one black person does something that doesn’t make every black person bad. If one cop does something we can not say that every cop is bad,” said Nwadike. “We cannot say that every cop is bad, none of these people here shot anyone!” Nwadike tries to explain to a woman, who isn’t interesting in listening to him and continues to scream in his face while demanding he remove his “free hugs” t-shirt.

The woman at one point in the video begins tugging on Nwadike’s shirt. Another black man then interjects and agrees with Nwadike.

“We know where he’s coming from he’s speaking from a message of peace.” Nwadike then thanks the other man for agreeing with him.

“This man gave me a hug,” Nwadike said, pointing at the white police officer, “and this man wants to fight me because of that,” pointing at a Black Lives Matter protester in the crowd who earlier started yelling profanities when he hugged the police officers.

“How does that make sense? Spreading more hate into the world, that’s what’s frustrating me,” Nwadike continued.

Although Nwadike might have a hard time convincing some protesters – as 70% of those arrested weren’t even from North Carolina – when will Black Lives Matter supporters realize that their movement was staged by a rich white man named George Soros.

Some BLM supporters have no problem taking money from a white man that wants to cause division, while others have no problem beating up a white man and dragging him and beating him up as some did in North Carolina. No matter the melanin in your skin color we are all human beings and the Free Hugs hero Ken Nwadike dared to stand up against BLM and expose the double standard of hypocrisy.

Nwadike ended his powerful speech saying “All lives matter.”  Yes, some police officers are murdering black men, but all cops are responsible for the individual actions done by by a few. It’s also worth noting – by making this a black vs. white issue, we are taking away from where the real concentrated effort and power should be going – and that’s the proper practices needed in hiring and training of police officers.

We Are Change previously recorded Ken Nwadike, the Free Hugs activist at the riotous protest against Donald Trump in San Diego.