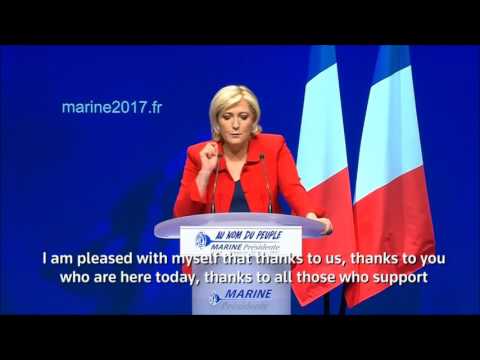 French lawyer and presidential candidate Marine Le Pen recently spoke against globalism, asserting that the European Union will die while speaking to a crowd of supporters on Sunday, adding “these globalists are watching us today in fear.”

“The European Union will die because the people don’t want it anymore. We’ll confirm once again that arrogant and hegemonic empires are destined to perish. We are going to change Europe, the idea Europe, jeopardized by these grave diggers that are the federalists, will be reenergized, revitalized in the Europe of the people, of foreign aids and of nations with our European allies.”

These comments come as the French presidential election is scheduled to begin in less than a month, with election campaigning starting to heat up. Marine Le Pen’s campaign comes at a pivotal moment in history, after the surprise election of Donald Trump and the world-shaking Brexit referendum.

Le Pen has been labeled a “far-right leader” and also compares to Trump’s political ideology, which has earned her a reputation for being a “French Donald Trump” by some. She was even seen at Trump Tower after the election of Donald Trump, but reportedly denied meeting with then President-elect Trump.

She does have several key differences to President Trump, however. As Zero Hedge reports, she is not a billionaire or political outsider. Yet “Madame Frexit” (as she has dubbed herself) tends to hold similar positions to Trump on the topics of immigration, borders, and climate change, as reported by BBC.

With Le Pen reportedly leading at 25%, a second round of voting seems almost inevitable. With three front-runners to the be the next French president, this election could have a major effect on geopolitical relations in Europe.

To view Marine Le Pen’s speech with English subtitles, check out the video below: