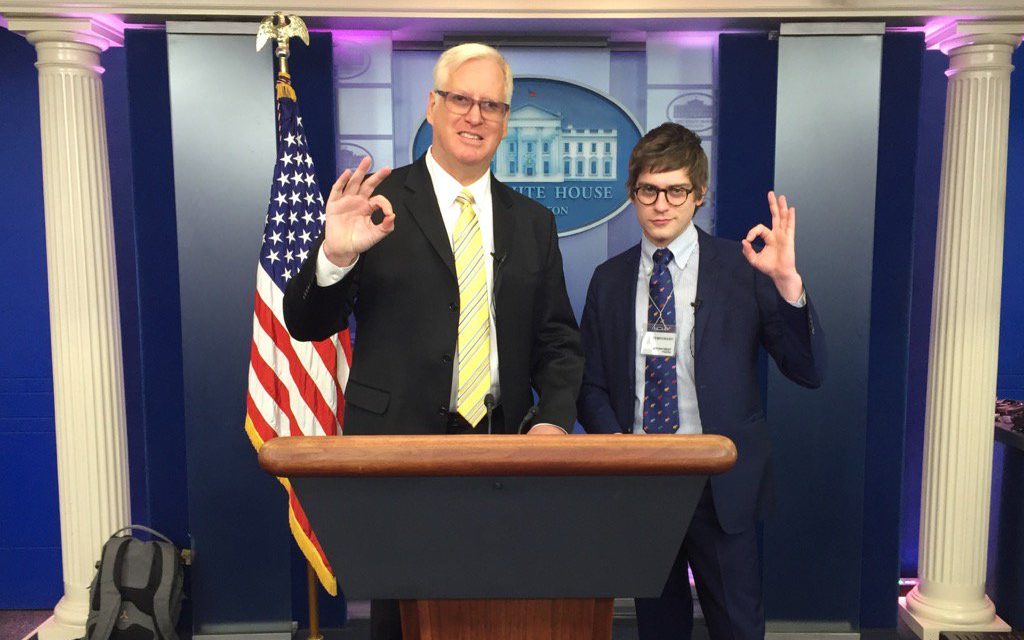 Lucian Wintrich, who is reportedly the first openly gay White House correspondent, was attacked by an unhinged Fox News Radio reporter while attending the administration’s press briefing on Friday.

Jon Decker asulted me at today's briefing. @FoxNews – is this behavior something you tolerate over there? He's sick .https://t.co/gzZhhIzOMD pic.twitter.com/ThppoHpRQw

The “Twinks for Trump” artist was at the White House to do his job on Friday, when Jon Decker of FOX News Radio assaulted him multiple times in front of his peers. According to Wintrich, the radio host pushed him in the break room before approaching him and assaulting him a second time in the press briefing room.

“He came out of nowhere and cornered me in the back room, not letting me pass. He started calling me a Nazi – despite many of my family members dying in the Holocaust. When I asked him why he was being so aggressive and why he thinks I’m a Nazi, he admitted that he never actually read anything I wrote or the Gateway Pundit,” Wintrich told We Are Change. “He’s a truly sick guy, Fox needs to address behavior like this in their staff.”

He was speaking to Lucian Wintrich. He said it twice, pointing to him, so everyone knew who he was. https://t.co/42njWQQ0fX

The Gateway Pundit is not a neo-Nazi website, but simply a right-wing outlet with a pro-Trump perspective.

“Your WH Radio reporter assaulted me twice & while calling me a Nazi. I had never met or spoken with him before,” Wintrich tweeted at Fox News Radio. “Half of my family died in the holocaust. Calling me a Nazi is not only wildly inaccurate but truly disgusting. He cornered me in the back room, pushing me toward a table, then he followed me out to the briefing room screaming.”

“Then he sat down starring at me from his chair, creepily smiling. This was unprovoked assault. He needs to be fired,” Wintrich continued.

Decker’s actions were denounced by other White House correspondents on Twitter, including Andrew Feinberg of Sputnik News.

Drama in WH press room between @lucianwintrich and Fox reporter I don't know. Not helpful for anyone. Let's stay calm everyone.

Reporter screaming at @lucianwintrich was Fox Radio's John Decker. Not helpful or professional

Shortly after the incident took place, Wintrich announced that he will be pressing charges against Decker over the assault.

After this briefing, I am going to be filing assult and harassment charges against Jon Decker. https://t.co/RiVM1yYCJv

Fox News Radio has not yet publicly responded to the incident.