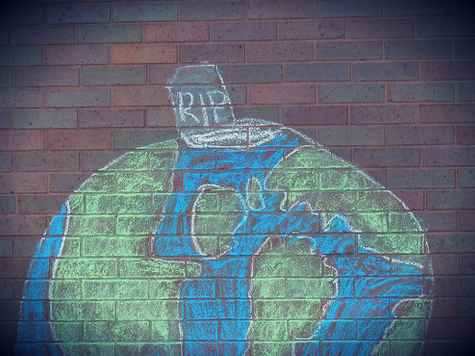 The economic costs of ‘global warming’ have been grossly overestimated, a leaked report – shortly to be published by the Intergovernmental Panel on Climate Change (IPCC) – has admitted.

Previous reports – notably the hugely influential 2006 Stern Review – have put the costs to the global economy caused by ‘climate change’ at between 5 and 20 percent of world GDP.

But the latest estimates, to be published by Working Group II of the IPCC’s Fifth Assessment Report, say that a 2.5 degrees Celsius rise in global temperatures by the end of the century will cost the world economy between just 0.2 and 2 percent of its GDP.

If the lower estimate is correct, then all it would take is an annual growth rate of 2.4 percent (currently it’s around 3 percent) for the economic costs of climate change to be wiped out within a month.

This admission by the IPCC will come as a huge blow to those alarmists – notably the Stern Review’s author but also including everyone from the Prince of Wales to Al Gore – who argue that costly intervention now is our only hope if we are to stave off the potentially disastrous effects of climate change.

Sir Nicholas (now Lord) Stern was commissioned by Tony Blair’s Labour government to analyse the economic impacts of climate change. Stern, an economist who had never before published a paper on energy, the environment, or indeed climate change, concluded that at least two per cent of global GDP would need to be diverted to the war on global warming.

Stern’s report has been widely ridiculed by economists, whose main criticism was that its improbably low discount rate placed an entirely unnecessary burden on current generations. Even if you accept the more alarmist projections of the IPCC’s reports on “global warming”, the fact remains that future generations will be considerably richer than our own – and therefore far more capable of mitigating the damages of climate change when or if they arise.

But Stern’s Review, published at the height of the global warming scare, was seized on by policy makers around the world as the justification for introducing a series of economically damaging measures, including carbon taxes, more intrusive regulation and a drive to replace cheap, efficient fossil fuels with expensive, inefficient renewables.

This is why Lord Stern has been variously described as “the most dangerous man you’ve never heard of” and been held responsible for some of the worst economic excesses of the green movement.

When you see wind farms covering every hill and mountain and most of the valleys too, you can blame Stern. If you can’t pay your heating bills, ask Stern why this has happened. When children are indoctrinated and dissenting voices crushed, it is at Nicholas Stern that you should point an accusing finger. When the lights start to go out in a few years time, it’s Stern who will have to explain why.

So the mitigation deal has become this: Accept enormous inconvenience, placing authoritarian control into the hands of global agencies, at huge costs that in some cases exceed 17 times the benefits even on the Government’s own evaluation criteria, with a global cost of 2 per cent of GDP at the low end and the risk that the cost will be vastly greater, and do all of this for an entire century, and then maybe – just maybe – we might save between one and ten months of global GDP growth.

Unfortunately, those expecting the IPCC’s Working Group II’s report to effect a new note of realism in global economic policy on climate change may be disappointed.

That’s because the Summary for Policymakers (the only part of the IPCC’s reports that policymakers tend to read) will – as usual – strike a much more alarmist tone than the contents of the more detailed report actually justify.

“Basically, it has been Pachauri-ised,” says Benny Peiser of the independent think tank the Global Warming Policy Foundation. Peiser is referring to the IPCC’s jet-setting chairman, Rajendra Pachauri, an Indian former railway engineer who has consistently put an alarmist complexion on all the IPCC’s Summaries for Policymakers.

As evidence for this, economist Richard Tol – a Working Group II author – asked yesterday for his name to be removed from the Summary For Policymakers. He said:

“The message in the first draft was that through adaptation and clever development these were manageable risks, but it did require we get our act together.”

“This has completely disappeared from the draft now, which is all about the impacts of climate change and the four horsemen of the apocalypse. This is a missed opportunity.”