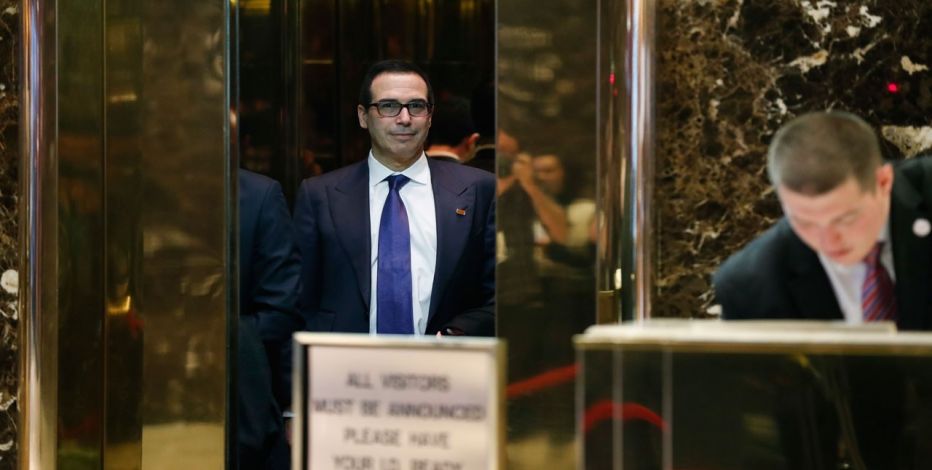 President-elect Donald Trump is expected to choose Steven Mnuchin a well known former Goldman Sachs banker and George Soros money manager as his Treasury Secretary. Additionally Trump had a meeting with Goldman Sachs President Gary Cohn recently. So much for draining the swamp?

Although Trump kicked all the lobbyists off his transition team he is seemingly contradicting himself and his campaign promises by reportedly choosing Steven Mnuchin according to campaign transition sources.

Before joining Trump’s campaign, Mnuchin rose to power through the kind of elite institutions that president-elect Donald Trump has demonized. Mnuchin has ties into Yale’s Skull and Bones secret society, in which he became a Goldman Sachs partner like his father. He also ran the hedge fund Dune Capital and worked for George Soros briefly as his money manager according to Mnuchin’s Bloomberg profile. On the campaign trail Trump spoke highly of Mnuchin despite his swampy ties to institutions like Goldman Sachs and elitists like George Soros, a prominent Hillary Clinton supporter.

“Steven is a professional at the highest level with an extensive and very successful financial background. He brings unprecedented experience and expertise to a fundraising operation that will benefit the Republican Party and ultimately defeat Hillary Clinton,” Trump said.

Mnuchin, the campaign added, “has previously worked with Mr. Trump in a business capacity and brings his expertise in finance to what will be an extremely successful fundraising operation for the Republican Party, “

“It’s a great privilege to be working with Mr. Trump to create a world class finance organization to support the campaign in the General Election,” Mnuchin said in a statement.

Mnuchin was seen arriving at Trump Tower on Monday. This time however, unlike during the campaign trail Mnuchin declined to comment about his possible role. When he was asked by reporters why he was there, he said, “I’m here just helping with the transition this week. A lot of work to do.”

In addition to that, Trump held a meeting with Goldman Sachs president Gary Cohn Tuesday. Is Trump draining the swamp – or filling it?