Greece – What You are not Being Told by the Media 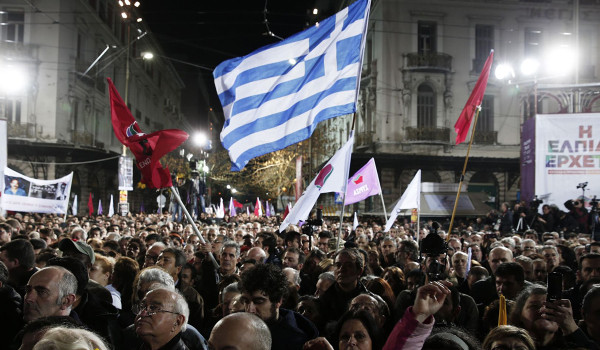 (Nationofchange)Every single mainstream media has the following narrative for the economic crisis in Greece: the government spent too much money and went broke; the generous banks gave them money, but Greece still can’t pay the bills because it mismanaged the money that was given. It sounds quite reasonable, right?

Except that it is a big fat lie … not only about Greece, but about other European countries such as Spain, Portugal, Italy and Ireland who are all experiencing various degrees of austerity. It was also the same big, fat lie that was used by banks and corporations to exploit many Latin American, Asian and African countries for many decades.

Greece did not fail on its own. It was made to fail.

In summary, the banks wrecked the Greek government and deliberately pushed it into unsustainable debt so that oligarchs and international corporations can profit from the ensuing chaos and misery.

If you are a fan of mafia movies, you know how the mafia would take over a popular restaurant. First, they would do something to disrupt the business – stage a murder at the restaurant or start a fire. When the business starts to suffer, the Godfather would generously offer some money as a token of friendship. In return, Greasy Thumb takes over the restaurant’s accounting, Big Joey is put in charge of procurement, and so on. Needless to say, it’s a journey down a spiral of misery for the owner who will soon be broke and, if lucky, alive.

Stage 1: The first and foremost reason that Greece got into trouble was the “Great Financial Crisis” of 2008 that was the brainchild of Wall Street and international bankers. If you remember, banks came up with an awesome idea of giving subprime mortgages to anyone who can fog a mirror. They then packaged up all these ticking financial bombs and sold them as “mortgage-backed securities” at a huge profit to various financial entities in countries around the world.

A big enabler of this criminal activity was another branch of the banking system, the group of rating agencies – S&P, Fitch and Moody’s – who gave stellar ratings to these destined-to-fail financial products. Unscrupulous politicians such as Tony Blair got paid by Big Banks to peddle these dangerous securities to pension funds and municipalities and countries around Europe. Banks and Wall Street gurus made hundreds of billions of dollars in this scheme.

But this was just Stage 1 of their enormous scam. There was much more profit to be made in the next three stages!

Stage 2 is when the financial time bombs exploded. Commercial and investment banks around the world started collapsing in a matter of weeks. Governments at local and regional level saw their investments and assets evaporate. Chaos everywhere!

Vultures like Goldman Sachs and other big banks profited enormously in three ways: one, they could buy other banks such as Lehman brothers and Washington Mutual for pennies on the dollar. Second, more heinously, Goldman Sachs and insiders such as John Paulson (who recently donated $400 million to Harvard) had made bets that these securities would blow up. Paulson made billions, and the media celebrated his acumen. (For an analogy, imagine the terrorists betting on 9/11 and profiting from it.) Third, to scrub salt in the wound, the big banks demanded a bailout from the very citizens whose lives the bankers had ruined! Bankers have chutzpah. In the U.S., they got hundreds of billions of dollars from the taxpayers and trillions from the Federal Reserve Bank which is nothing but a front group for the bankers.

In Greece, the domestic banks got more than $30 billion of bailout from the Greek people. Let that sink in for a moment – the supposedly irresponsible Greek government had to bail out the hardcore capitalist bankers.

Stage 3 is when the banks force the government to accept massive debts. For a biology metaphor, consider a virus or a bacteria. All of them have unique strategies to weaken the immune system of the host. One of the proven techniques used by the parasitic international bankers is to downgrade the bonds of a country. And that’s exactly what the bankers did, starting at the end of 2009. This immediately makes the interest rates (“yields”) on the bonds go up, making it more and more expensive for the country to borrow money or even just roll over the existing bonds.

From 2009 to mid-2010, the yields on 10-year Greek bonds almost tripled! This cruel financial assault brought the Greek government to its knees, and the banksters won their first debt deal of a whopping 110 billion Euros.

The banks also control the politics of nations. In 2011, when the Greek prime minister refused to accept a second massive bailout, the banks forced him out of the office and immediately replaced him with the Vice President of ECB (European Central Bank)! No elections needed. Screw democracy. And what would this new guy do? Sign on the dotted line of every paperwork that the bankers bring in.

(By the way, the very next day, the exact same thing happened in Italy where the Prime Minister resigned, only to be replaced by a banker/economist puppet. Ten days later, Spain had a premature election where a banker puppet won the election).

The puppet masters had the best month ever in November 2011.

Few months later, in 2012, the exact bond market manipulation was used when the banksters turned up the Greek bonds’ yields to 50%!!! This financial terrorism immediately had the desired effect: The Greek parliament agreed to a second massive bailout, even larger than the first one.

Now, here is another fact that most people don’t understand. The loans are not just simple loans like you would get from a credit card or a bank. These are loans come with very special strings attached that demand privatization of a country’s assets. If you have seen Godfather III, you would remember Hyman Roth, the investor who was carving up Cuba among his friends. Replace Hyman Roth with Goldman Sachs or IMF (International Monetary Fund) or ECB, and you get the picture.

Stage 4: Now, the rape and humiliation of a nation begin under the name of “austerity” or “structural reforms.” For the debt that was forced upon it, Greece had to sell many of its profitable assets to oligarchs and international corporations. And privatizations are ruthless, involving everything and anything that is profitable. In Greece, privatization included water, electricity, post offices, airport services, national banks, telecommunication, port authorities (which is huge in a country that is a world leader in shipping) etc. Of course, the ever-manipulative bankers always demand immediate privatization of all media which means that the country gets photogenic TV anchors who spew establishment propaganda every day and tell the people that crooked and greedy banksters are saviors; and slavery under austerity is so much better than the alternative.

In addition to that, the banker tyrants also get to dictate every single line item in the government’s budget. Want to cut military spending? NO! Want to raise tax on the oligarchs or big corporations? NO! Such micro-management is non-existent in any other creditor-debtor relationship.

So what happens after privatization and despotism under bankers? Of course, the government’s revenue goes down and the debt increases further. How do you “fix” that? Of course, cut spending! Lay off public workers, cut minimum wage, cut pensions (same as our social security), cut public services, and raise taxes on things that would affect the 99% but not the 1%. For example, pension has been cut in half and sales tax increase to more than 20%. All these measures have resulted in Greece going through a financial calamity that is worse than the Great Depression of the U.S. in the 1930s.

After all this, what is the solution proposed by the heartless bankers? Higher taxes! More cuts to the pension! It takes a special kind of a psychopath to put a country through austerity, an economic holocaust.

If every Greek person had known the truth about austerity, they wouldn’t have fallen for this. Same goes for Spain, Italy, Portugal, Ireland and other countries going through austerity. The sad aspect of all this is that these are not unique strategies. Since World War II, these predatory practices have been used countless times by the IMF and the World Bank in Latin America, Asia, and Africa.

This is the essence of the New World Order — a world owned by a handful of corporations and banks; a world that is full of obedient, powerless debt serfs.

So, it’s time for the proud people of Greece to rise up like Zeus and say NO (“OXI” in Greece) to the greedy puppet masters, unpatriotic oligarchs, parasitic bankers and corrupt politicians.

Dear Greece, know that the world is praying for you and rooting for you. This weekend, vote NO to austerity. Say YES to freedom, independence, self-government, sovereignty, and democracy. Go to the polls this weekend and give a resounding, clear victory for the 99% in Greece, Europe, and the entire western world.