The Grinch That Stole Flint’s Christmas? 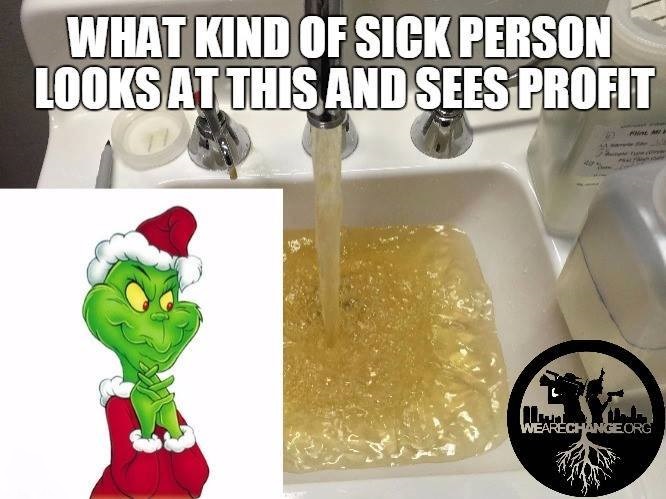 I have been following a story for quite some time and gathering evidence of what looks like a heinous scam involving an alleged grinch and a Christmas party in flint.

What caught my eye is a Christmas party for the poor children of Flint, Michigan, involving misappropriated GoFundMe donations and a real life grinch that almost stole the Christmas of Mission Flint – alleged scam artist Syrah Scott.

While it must be noted that Syrah Scott is innocent until proven guilty in a court of law, the evidence demands an investigation into this woman for potentially exploiting a crisis.

First, who is Syrah Scott? Syrah Scott runs the BeYouCampaign on Facebook and was involved with charitable group Mission Flint early on to throw a Christmas party for the children of Flint. Scott alleges that she single-handedly created this virtuous event, claiming that she “wrapped all 100 presents herself and with her daughter.”  However, there is a different tale one that is much darker, painted by the activists of Mission Flint that came together to give the children of Flint a Christmas, and before that a Thanksgiving.

It all started in November with Scott hosting a Thanksgiving event for the families affected by the Flint water crisis. During the event a Flint resident spoke about the crisis in the city – and the way Scott attempted to control the situation in the video below is telling. Note: Mission Flint claims Scott told them that 300 people were going to show up to the event – in actuality the numbers were much lower then that as you can see in this picture and the video below.

That video was ripped from “Ciscored’s facebook” – a member of Mission Flint. This was the first time the group got to witness Scott in action. Prior to any of this, the group claims that before working with Scott “there were already allegations of her stealing GoFundMe money,” a member of the group said.  But they chose to work with her anyway because they thought they were just rumors and she talked a big game and said she had a lot of connections that could help their cause.

The real problems took place with Scott leading up to the planned Christmas event in December. “The disconnect between Ms. Scott and the rest of the group began as the event developed, which was initially supposed to be ‘by the kids, for the kids’ which meant that we would let the younger members of our organization put the event together for the kids of the River Park Apartments,” Mission Flint said in a statement.

“As we began planning the event, Syrah got increasingly more hostile when she realized that the members didn’t care for her aggressive emphasis on “branding” nor her lack of communication skills. She began to exhibit a complete lack of respect and decency towards her co-workers, being prone to name-calling and other childish behavior. Despite her shortcomings, we moved forward for the sake of our Mission and for Flint, and only began taking action against her after all of our members were denied access to the GoFundMe and no financial records were produced.” – Mission Flint’s statement

Mission Flint claims Scott hijacked Mission Flint’s campaign and the money that they were raising for the children of Flint. Mission Flint further claims she used the money for her own gain, telling the group that “other expenses came first before donations to the kids” for that I will quote the group.

“First off: expenses do not include donations. We hope this would go without saying when operating a non-profit amidst a city-wide crisis, but apparently, for Ms. Scott ethics should not be assumed. This means that when a DJ agrees to perform for FREE, when a rapper agrees to perform for FREE when donors send gifts or supplies, these things are not counted against the funds raised in a GoFundMe account. After that it became clear that Ms. Scott was going to withhold funds and refused to provide financial documents, we opened a separate GoFundMe and began the process of having the GoFundMe linked to her personal bank account shut down and the donations refunded.” – Mission Flint’s statement

Other “expenses” that Mission Flint believe Scott used the GoFundMe money for include plane tickets for her and her daughter. Small tiny trinkets of gifts that she claims she donated in her own BeYouCampaign Facebook press release were allegedly gifts that were donated not purchased. The gift bags are seen below in two separate boxes. 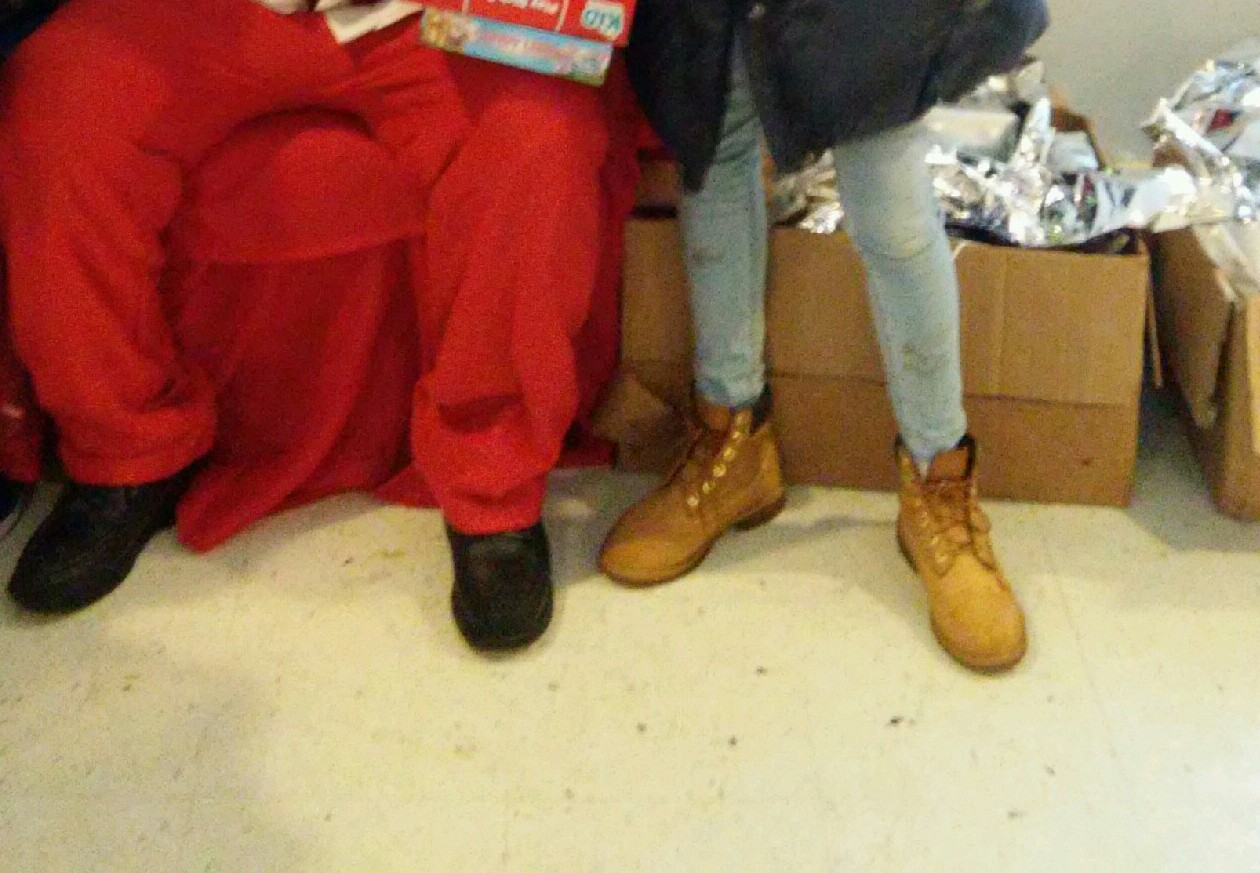 “She sent gifts in thru him. Some bagged, some wrapped. The gifts were little trinkets, like five below stuff, we suspect donated. That’s what she does. She gets items donated, sends them into the party thru him, has our people to help carry it all in, so she can say ‘see? You brought it all in, but none of it was bought with the [GoFundMe money]. She says over & over she has receipts. Never provided any,” Mission Flint said.

Scott has yet to produce one single financial document showing that she purchased anything with the money raised on the GFM (GoFundMe) but claims that her colleague, an individual identified as Mr. McQueen, purchased out of pocket all these gifts including the entertainment at the event – a rapper WAOR, otherwise known as Michael T. Gilbert an independent rapper in Flint. 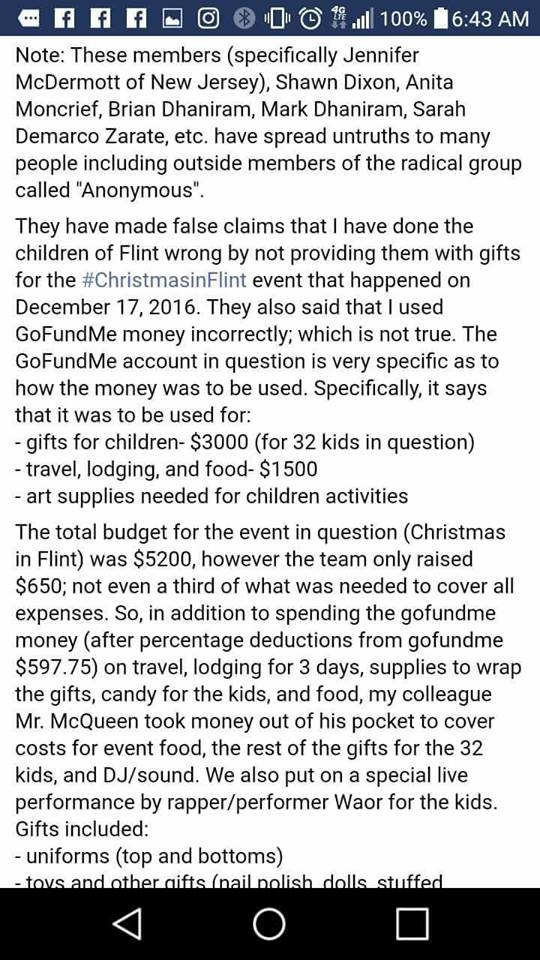 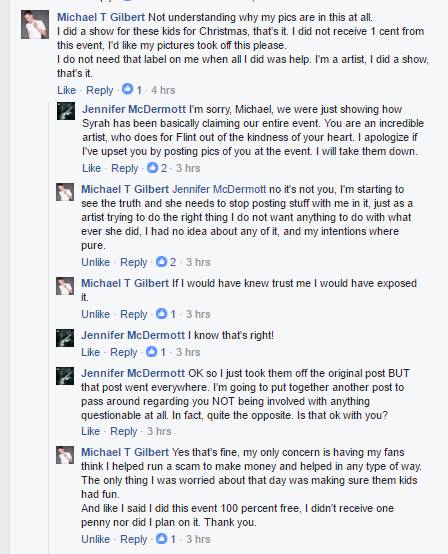 More allegations ensured, including a claim that clothing Ms. Scott sent to Flint back in September was actually sample clothing with holes in it. The picture below has the visible words “SAMPLE” and while Scott claimed to send clothing to the Christmas event, that clothing they suspect was donated. They note the “main issue here is that she is suspected of stealing GoFundMe Funds.” 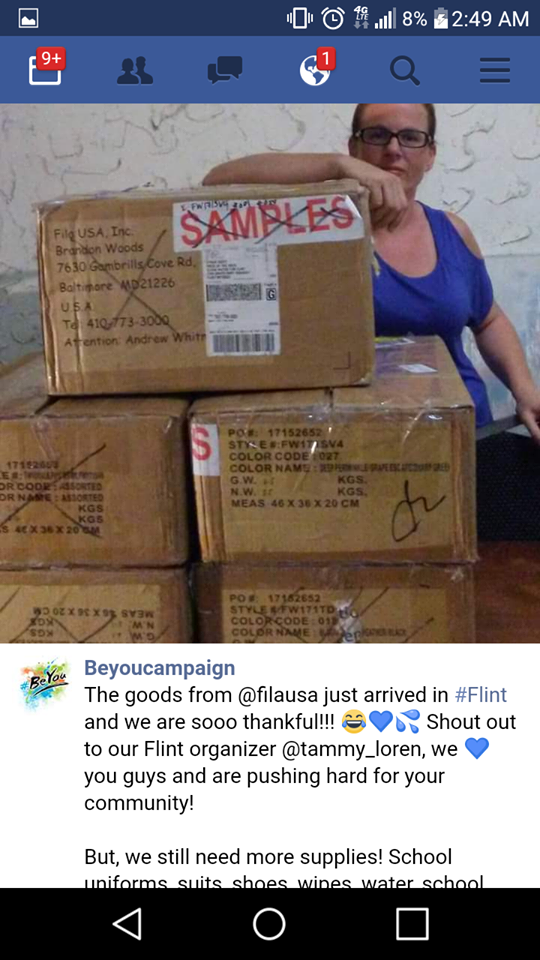 The clothing was provided by a company that doesn’t wish to be named or involved in any of this, and the company in question has since promised to make things right and provide the children with clothing according to one Mission Flint member I spoke to. This unnamed company should be proud of stepping up and making things right, because it is likely not their fault they were mislead, and to step up for the children is huge.

To that unnamed company, if you later want to to add a statement to this story, email me An0nKn0wledge@protonmail.ch or message me on twitter @An0nKn0wledge. And to the would be Grinch of this Christmas story, a final word:

“Ms. Scott’s business is evident in her handling of school uniforms for the children of Flint. Ms. Scott posted pictures of the uniforms to social media, uniforms that never showed up at our Christmas event for the children. She later claimed that these uniforms were delivered in gift bags, a claim which is provably untrue. The gift bags Ms. Scott sent had candy and trinkets of little practical use, and the intent of these bags seemed more clearly purposed towards branding Ms. Scott’s organization, as the bags had a large “Clean Water 4 Flint” sticker on the front. Having made the decision to avoid Ms. Scott’s persistent, neurotic appeal to branding everything from Flint’s events to its children, we removed each sticker with great satisfaction. Furthermore, none of the uniforms Ms. Scott posted about on social media had receipts. We do not know if they were donated if they were financed with GoFundMe funds, where the uniforms went, or how they were attained. We originally requested funds from Ms. Scott to purchase uniforms, but of course, to no avail,” Mission Flint wrote.

Where there is yin there is yang, as a generous donor, Jennifer McDermott, gave the amount of money that Scott allegedly embezzled and helped save Flint’s Christmas. It’s worth noting that Ms. McDermott didn’t do it alone, but unlike Scott, McDermott provided financial records and those receipts show her claims that she had to spend $705.08 out of pocket to cover for the money that Ms. Scott allegedly stole.

In total, the receipts for coats and boots published by Jennifer McDermott (published again in the comments) equals $1,384.66. Subtracting our new GoFundMe’s deposit of $679.58, we can see that Jenn had to spend $705.08 out of pocket because of Ms. Scott’s lack of concern for the children of Flint.”

I wish it ended there but it doesn’t unfortunately, no this woman has done more – she claimed to be at the event and a clear video of the event shows that she wasn’t there, she however, has been stealing other people’s pictures and posting them as her own. One includes a picture of the rapper WAOR with the gifts that Ms. Dermott bought as documented above with the receipts. The other is the picture of Tammy Loren above both have told her to take down their pictures according to Mission Flint. 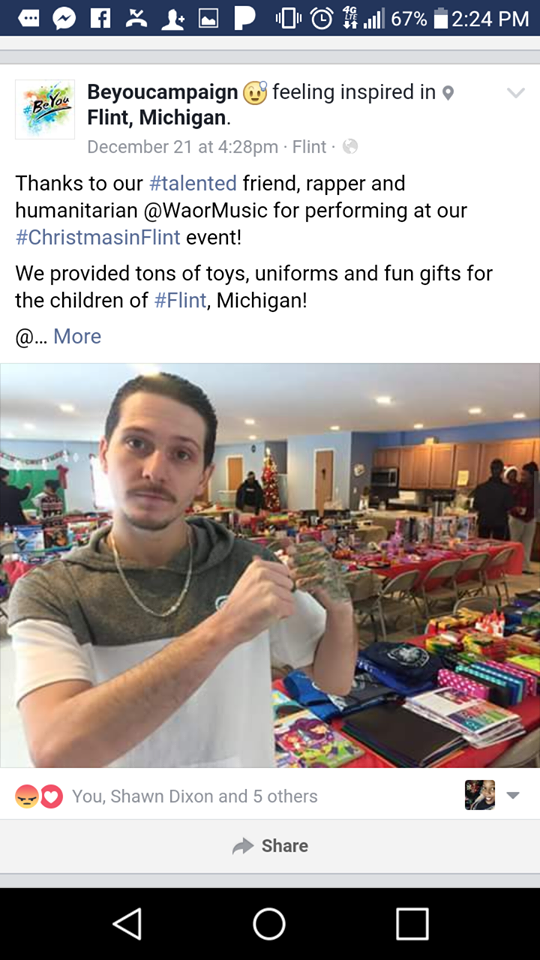 With all this evidence and many people telling me this was a scam, I got more curious to look into the BeYouCampaign, to my surprise Scott isn’t even an original founder of the BeYouCampaign – on the website associated with the BeYouCampaign the founders are named – J. Ryan Lacour and Brenn Colleen founded in 2010. Nor does Scott even run the official social media accounts so don’t direct hate at the actual BYC campaign.org. Scott’s apparently fraudulent BeYouCampaign was said to be founded in 2013 according to her Facebook group.

Launched in September 2013, #BeYou is an answer to some of these serious public health issues. It is the cheerleader and the support system for youth stricken with grief, hopelessness, and despair. It is the voice that individuals need for encouragement, and the outlet that people cry out for when they want to speak about their struggles and put life’s dilemmas into perspective.

Essentially, #BeYou is about embracing yourself, honing your skills, and living out your true purpose in life. It’s about self-expression, freedom of speech, and liberation. With focus on a positive outlook, our movement aims to inspire those that have doubt, insecurities, and extreme disbelief in themselves. We desire to motivate the masses to take action, think outside the box, and connect with their inner self. Being “normal” can be repetitive and limited. We encourage everyone to reach for the stars, and positively stimulate those around you, to do the same.

You owe this to the world, and would be doing a huge disservice to others around you if you didn’t. Embrace yourself, because at the end of the day, YOU are your biggest supporter!

I contacted the real BeYouCampaign via email and alerted them of Ms. Scott and what is going on, that she is using their name for potential fraud and that since she won’t make the organization’s financial activity transparent she needs to be investigated. 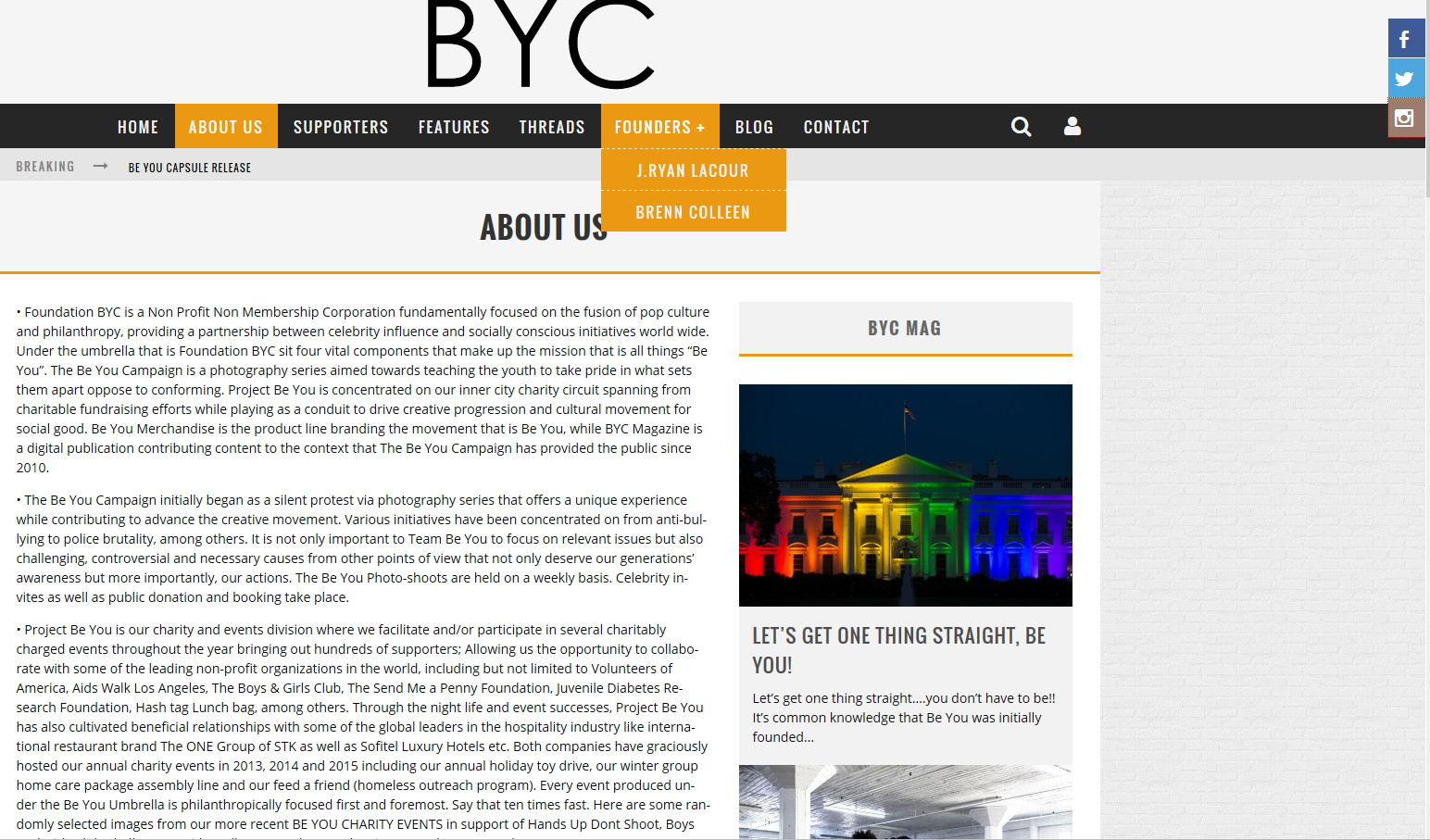 (when reached for comment Ms. Scott did not return any messages before publication to We Are Change.)