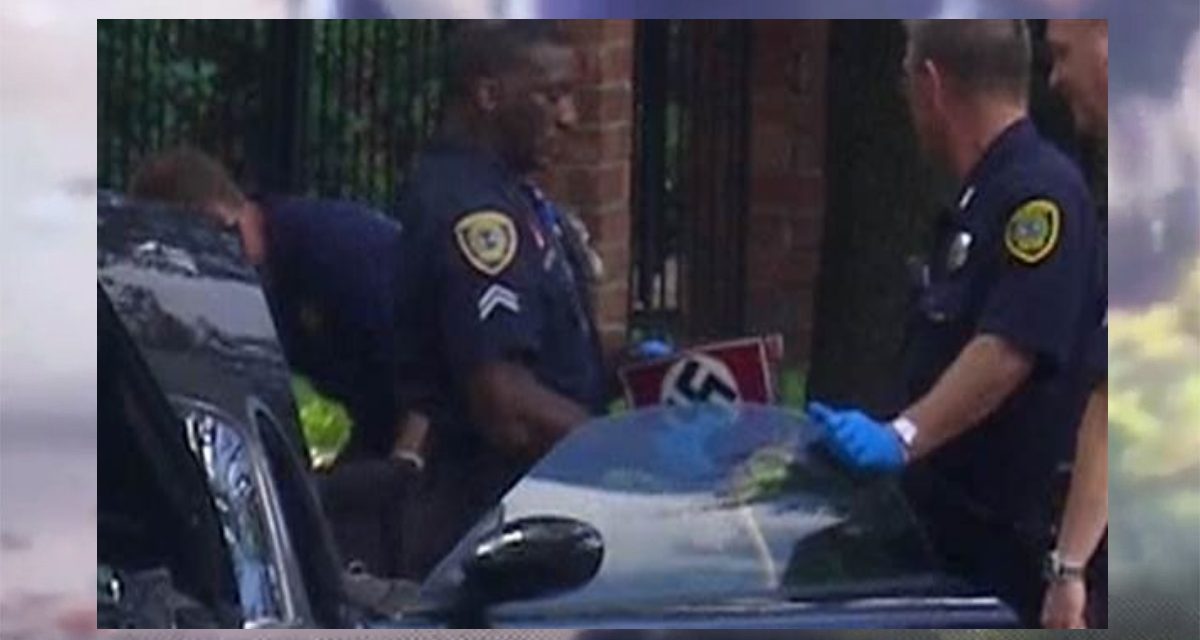 HOUSTON – The lawyer who carried out Monday morning’s shooting that wounded nine people was wearing what appeared to be Nazi paraphernalia, two law enforcement sources told Channel 2 Investigates’ Robert Arnold. Reports of a man shooting randomly on Law Street, near a shopping center on the northwest corner of Weslayan and Bissonnet streets, first came in around 6:30 a.m.

Interim Houston police Chief Martha Montalvo said officers who went to the scene were able to quickly locate the gunman in the 4400 block of Law Street. Police said he was using a tree as cover.

She said the shooter immediately began firing at the officers. Nine officers exchanged gunfire with the suspect.

The gunman was found dead shortly after, she said. Nearly 75 shell casings were found at the scene, police said. No officers were injured.

“It’s my understanding that he was neutralized by police,” Montalvo said.

Police estimate around 2,500 rounds of live ammunition were found inside his vehicle.

Law enforcement sources said the shooter was wearing what appeared to be an antique German uniform with swastikas on it.

“What extent that played I don’t know because there’s also other historic, or what I would call vintage, military stuff in the apartment going back to the Civil War,” HPD Capt. Dwayne Ready said.

Montalvo said the gunman’s car was also found on Law Street, and that at least one weapon was found inside. Police spent hours searching the vehicle.

Investigators also combed through the shooter’s condominium, where they found what appeared to be Nazi paraphernalia inside, according to a law enforcement source. Several other weapons were found inside the shooter’s residence, police said.

Police said there is no known motive. When asked if she believes the shooting was related to terrorism, Montalvo said that she is not ready to say that yet.

Montalvo said six people were initially hospitalized because of the shooting.

Another victim was listed in serious condition at Ben Taub Hospital, Montalvo said.

Three others were treated and released.

Owner of car that was searched identified

KPRC2 has confirmed the owner of that vehicle is 46-year-old attorney Nathan DeSai.

Ken McDaniel, DeSai’s former law partner, said that they decided to go their separate ways in February because of economic reasons. He said he hasn’t spoken to DeSai since then.

DeSai’s father, Prakash, said his son was in his own practice, but it was not doing well.

DeSai owns a condo at the Oaks of Weslayan on Law Street, KPRC2 has confirmed.

According to the Texas State Bar, DeSai specializes in business, family and criminal law.

Close calls for some neighbors

Any other day Scott Smolensky said he would have been up and walking his dog along Law Street, the street where the shooter was picking off victims. Instead he slept in.

“Technically I should be dead right now. I would have come face to face with the shooter,” he said. “I feel very lucky.”

As the sound of gunfire spread, so did the fear. MORE: Victims, witnesses describe chaos

“Then I started hearing more and more they started getting closer,” Matt Browning said.

“I brought my kids into my bedroom and we all huddled around my bed. I wouldn’t take them to school. I wouldn’t let my husband go to work because I was scared for our safety this morning,” Lisa Beckman said.

“The (officer) was lying prone with an assault rifle, shooting at the suspect,” Olson said.

Lia Panzicka heard the gunfire and went to her neighbor’s house.

“Because I knew she had a weapon, a gun, to protect us,” she said.

When the bullets stopped flying, she realized just how close they had actually come.

“I went outside and I could see a bullet hole in the side of the house and when I looked inside second bedroom. I could see wall had been blown out slightly,” Panzicka said. “God kept me in bed today, kept me safe and not in that second bedroom.”

Houston Mayor Sylvester Turner, who is leading a trade mission to Cuba, said that he is keeping in close contact with local officials, but does not expect to cut short his trip.

He said if one Houstonian hurts, we all hurt. He’s asking everyone to pray for the victims and their families.

At this point, investigators believe the gunman acted alone and said they have not yet found any links to extremist groups.

Turner also commended officers for the outstanding work on the case.

Gov. Greg Abbott released a statement shortly after the shooting that read, “As victims of the Houston shooting fight for their lives this morning, Cecilia and I ask that all Texans join us in keeping them in your thoughts and prayers. Our hearts go out to the victims’ families and we wish them all a full and speedy recovery. We would also like to thank the Houston Police Department and all first responders for their decisive actions in putting a quick end to this horrific act.”