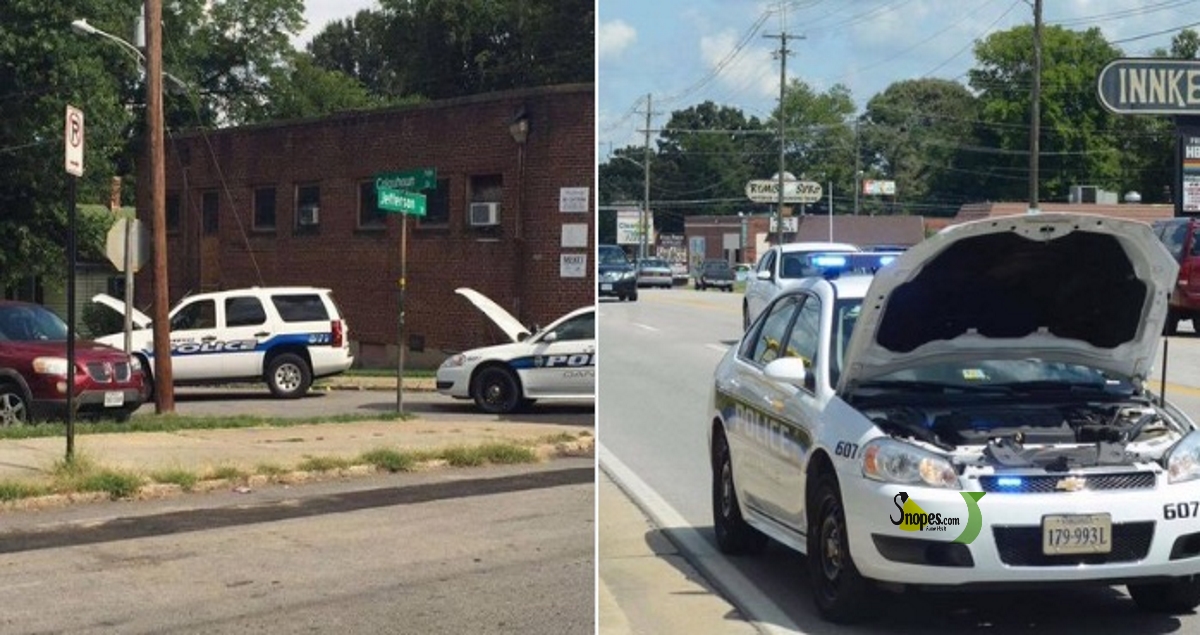 The Danville, Virginia Police Department is under a great deal of scrutiny after going viral for appearing to have popped the hoods of cop cars in order to block their dashcam views. Police officials have issued a denial, claiming that their cars merely got too hot and needed to cool off, but that explanation is also a perplexing one.

Update: Danville police say they’ve ended this practice, and elaborated on their explanation below.

Here’s the initial criticism that sparked the interest in this story, originally posted here on a local’s Facebook page
and picked up on Twitter by New York Daily News justice writer Shaun King:

You can see why that might be concerning, especially at a time when police conduct—and their actions as recorded by video—are under more scrutiny than ever.

I decided to look up and see if the Danville PD had issued any statement on the claim and it appears they have. Oddly, they spoke with Snopes, which moved pretty quickly on this story today.

Danville police claim that there is no policy that allows cops to raise their hoods to block dashcams. (If you feel like this still leaves room to be a non-denial denial, you and I are getting the same vibe.) And police officials said that these hoods were raised to stop their cop cars from overheating on a particular day.

It was hot, says the Danville PD, and the cars were forced to sit idle for several hours, so the hood-poppage was a reasonable preventative measure.

Now, I can’t say with absolute certainty that this is a baseless claim. Do new cop cars can have lots of electronics in them? Yes. Can cars get hot just sitting around? Yes. Does popping the hood sorta help with overheating? Sure. Does this still sound, like, extremely suspect? Absolutely! It’s particularly weird for Danville PD to be making a single claim about overheating on these two totally different cars—an Impala and a Tahoe—with two different kinds of engines. And it’s weird that Danville is the place where this issue is popping up; both of these police cars are used in far hotter climates than Virginia. Here’s the Danville PD’s full statement to Snopes, doubling down on the overheating explanation. There’s also an implication that the police department added “cooling louvers” to the cars, which no photo evidence supports:

The amount of electronic equipment required in a Patrol vehicle causes a substantial amount of heat to build in the engine compartment. If you notice in the photos of the Police cars there are also cooling louvres on the hoods. This was the first attempt to stop the overheating issues which were disabling our vehicles and causing very expensive repairs. Our cars are in use 24 hours a day and the photo of the two patrol vehicles was on a day with temperatures nearing 100 degrees. The hoods aren’t opened unless the car is expected to idle with the emergency lights running for an extended period of time. The officers are equipped with Body Worn Cameras so there is a back up to an in-car camera that captures any citizen encounter far better than the in-car camera. There are video systems for inside and outside the car, an emergency light bar, Mobile Data Terminal, police Radio, printer and normal systems running off the heavy duty batteries in the cars. This generates a tremendous amount of heat which damages the engine electronics.

The accusations that this is being done for any nefarious purpose are completely false. We have had zero complaints from local citizens.

The problems are well known to Chevrolet. May I suggest contacting Chevrolet directly and demanding a remedy and retrofitting of the correction at their expense.

We took Danville PD on their word and reached out to Chevrolet to inquire about this, and they said they were unaware of such an issue, but are looking into it. They also offered to open a line of assistance to Danville:

We are going to contact the agency and offer to help them resolve any vehicle issues they may be experiencing.

Now, there have been some recent Chevrolets that experienced overheating issues, but it doesn’t look to me like Danville PD is driving around in Corvette Z06s.

UPDATE: The Danville Register & Bee tonight reports the Danville Police Department will now “ban the practice of opening the hoods of patrol cars.”

The newspaper also reported that police doubled-down on the heating issue, saying idling in the summer causes certain “electrical parts in the engine” to “melt.”

The Register & Bee also spoke with a Danville Police lieutenant:

Certain “electrical parts in the engine” will “melt” when the heat rises in the summer, according to Danville Police Lt. Mike Wallace.

The patrol cars will get hot when they sit idling for an extended period while an officer writes a report or investigates a crime scene, he said.

This still seems like an unusual problem, that, if true, is not well-documented for Chevrolet Tahoe and Impala police cars.

Written by Raphael Orlove at http://jalopnik.com/