How a Harmless Frog Became a ‘Nazi’ Symbol: Pepe’s an Issue in US Election 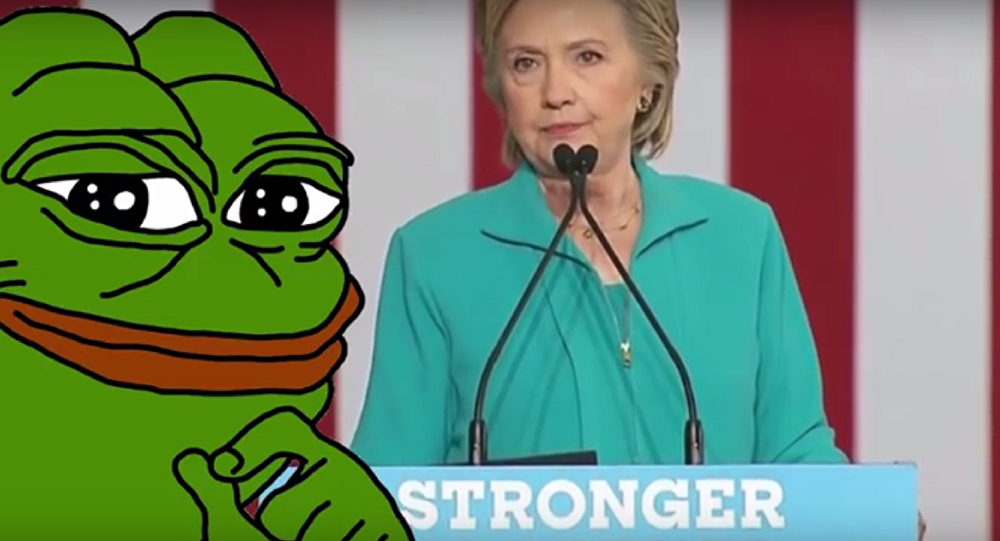 There is now a full blown battle raging on Reddit and Wikipedia as the Hillary Clinton campaign continues to fight to paint the beloved Pepe meme as a Nazi frog. 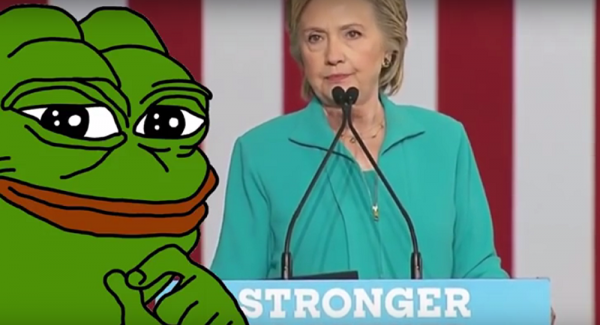 Additionally, the first link Google provides when searching for Pepe the frog is a new page on the Clinton website explaining how the popular meme, dating to 2008, is now a symbol of white supremacy.

Over on Wikipedia, editors have been engaged in an edit war, after the page was changed to say that the anthropomorphic frog is associated with Trump, white nationalism, and the alt-right.

It was quickly edited to say:

“In 2016, Hillary Clinton tried to insinuate that Pepe was associated with the Donald Trump’s presidential campaign, white nationalism and the alt-right movement based on an anonymous teenager claiming to be a white supremacist.[11][12]”

This happened around the same time that Hillary Clinton’s campaign posted a Pepe “explainer” on her website, which immediately became the top result for the meme on Google.

Donald Trump, Pepe the Frog, and White Supremacists: An Explainer, the article is headlined, continuing, “That cartoon frog is more sinister than you might realize.”

“In recent months, Pepe’s been almost entirely co-opted by the white supremacists who call themselves the ‘alt-right.’ They’ve decided to take back Pepe by adding swastikas and other symbols of anti-semitism and white supremacy,” the page asserts.

The battle between Clinton and Pepe reached new heights during Clinton’s “alt-right” speech, when a 4chan user live-posted from inside her rally. He had brought a printout of the frog and posted a photo of Pepe with the stage in the background.

Throughout the speech, other users began to encourage the OP to shout “Pepe” as she spoke, which he did at the candidate’s first mention of the alt-right, making a joke of Clinton’s perceived fear-mongering.

Clinton has continued to attempt to portray a large portion of Trump’s millions of supporters and the alt-right (a group of people with varying politics, but appearing to have as their main theme freedom of speech) as the scourge of humanity, with the now infamous “basket of deplorables” line.

Following her “deplorables” comment, the internet went wild, with the tag becoming a sort of rallying cry among Trump supporters. A mock poster for a fake movie called The Deplorables quickly became a meme, using an old promotional image from the film The Expendables, but now featuring images of Ben Carson, Chris Christie, Trump and his two sons, as well as Milo Yiannopoulos and others, including Pepe the frog.

Donald Trump Jr. was sent the meme and posted it to his Instagram, enjoying the parody.

no- Pepe is a funny meme. Anyone who says Pepe represents race is a racist. pic.twitter.com/2SKV3NjREh

Pepe, an anthropomorphic frog, is a popular meme that originated, along with many other popular memes – from Doge to Scumbag Steve – on 4chan message boards. It is widely used across party lines by those who enjoy internet culture. While it has become a sort of unofficial mascot for those on the right, they are not the only ones who use it, just like the memes featuring Harambe.

Sure, the frog has been used by some mainly anonymous internet users who aim to offend, but if that is the standard for making something a symbol of white supremacy we are all in trouble. If say, a white supremacist drew a swastika on a photo of a Carebear, would the cartoon bears then become symbols of hate?

Originally from the comic series Boy’s Club by Matt Furie, Pepe gained popularity in 2008 with the “feels good man” reaction image. From there sad, smug, angry, and a variety of other reaction-Pepes were born. The comic frog has been a staple of internet culture ever since.

A Pepe was even shared by pop star and Clinton supporter Katy Perry in 2014. Her sick Pepe was retweeted over 10,000 times. A photo of a twerking pepe was also posted by Nicki Minaj on her Instagram at around the same time.

Once mainstream celebrities began to use Pepe, redditors and 4chan users decided to “flood the market” with the meme to kill it off. This resulted in spoof sales of “rare Pepe” collections on eBay. The joke lives on.

Something that most meme-lovers know is that once their pet meme is embraced by “normies,” or people like Clinton who don’t get internet culture, it is no longer cool. For this reason, Clinton’s demonization of Pepe may actually be the thing that keeps the smug frog going forever.