Iraqi agriculture expert Dr. Nakd Altameemi joins Mnar Muhawesh on ‘Behind the Headline’ to discuss the devastating toll that war, sanctions and Western corporations have had on Iraq’s centuries-old agricultural traditions.

The Iraq of today is associated with horrific violence, a refugee crisis and widespread poverty. The images we see flashed across the news show nothing but terror and misery.

But it hasn’t always been this way.

Modern-day Iraq lies in the Fertile Crescent of Mesopotamia, the cradle of civilization where mankind flourished as it developed seed cultivation and its first farming techniques — all nourished by the Tigris and Euphrates rivers.

Generations of people have tilled the soil there since 8,000 BC, developing the seeds that grew into the many types of wheat seen around the world today.

But centuries of cultivation turned to dust in 2003, when former President George W. Bush invaded the country, planting seeds of war that would be sown for years to come.

While about two million civilians were killed as a result of the U.S. invasion of Iraq, the war is still ingrained in the U.S. psyche as a humanitarian effort to save the Iraqi people from a brutal dictator.

But what it actually did was pave the way for foreign corporations to descend upon the country and turn a profit on the chaos. 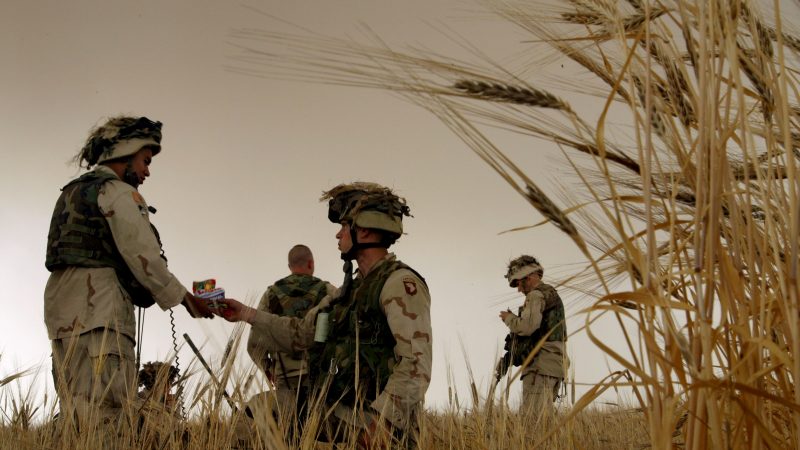 A U.S. Army soldier shares a bag of sunflower seeds with a fellow soldier, as they wait for a helicopter to pick them up in a field of barley nearly ready to harvest, outside Tall Ash Shawr, a village in northwestern Iraq, Monday, May 19, 2003. (AP/Brennan Linsley)

Following the U.S.’ bombing of Iraq and its capture of Saddam Hussein, the Coalition Provisional Authority was established to serve as the country’s temporary government.

The CPA was headed by Paul Bremer, the former managing director of Kissinger Associates, an influential consulting firm founded by Henry Kissinger, a former secretary of state and war criminal.

In 2004, Bremer put the “100 Orders” into effect. They were “binding instructions or directives to the Iraqi people that create penal consequences or have a direct bearing on the way Iraqis are regulated, including changes to Iraqi law.”

In other words, Iraqis were told, “Follow our orders or die.”

One order, in particular, had a crippling effect on Iraq’s centuries-long farming and seed cultivation traditions.

Order 81 — the Patents, Industrial Design, Undisclosed Information, Integrated Circuits and Plant Variety Law — gave those who hold patents on certain plant varieties absolute rights over the use of their seeds in Iraq for 20 years.

The order also facilitated the introduction and domination of imported, high-priced corporate-developed seeds, mainly from the U.S. These seeds do not reproduce or produce yields without prescribed chemical fertilizer and pesticide inputs.

This created a major dilemma for Iraqi farmers, as Najma Sadeque wrote in 2012:

“It meant that the majority of farmers who had never spent money on seed and inputs that came free from nature, would henceforth have to heavily invest in corporate inputs and equipment — or go into debt to obtain them, or accept lowered profits, or give up farming altogether.”

Meanwhile, the country’s national seed bank — located, unfortunately, in the infamous city of Abu Ghraib — was destroyed during the 2003 U.S. invasion and subsequent looting, making it another casualty of the Iraq War. 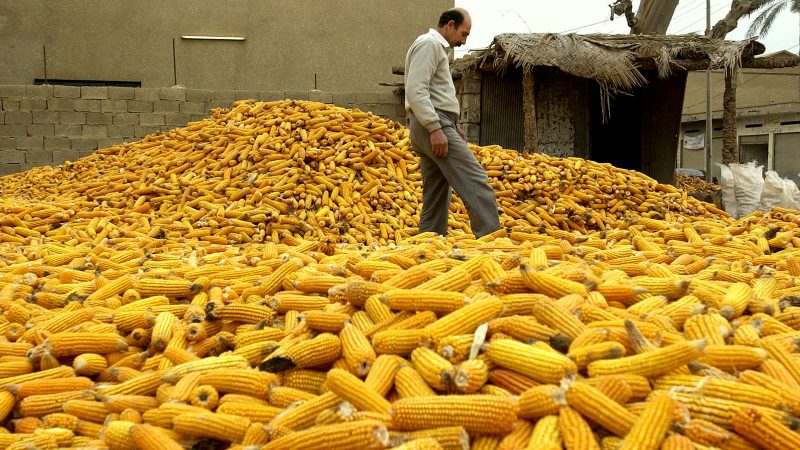 An Iraqi corn broker walks through his supply while preparing it to be shipped to retail markets Monday, Jan. 5, 2004 in a village north of Baghdad. (AP/Julie Jacobson)

Farmers Forced to Pay Fees for Seeds for the first time

Today, because of Order 81, Iraqi farmers who choose to plant patented seeds that come from multinational agribusiness monopolies have to sign agreements that force them to pay a “technology fee” and an annual licensing fee.

If an Iraqi farmer saves seeds to replant in the future — as farmers around the world have done for centuries — they are subject to substantial fines from the seed supplier.

Ultimately, Order 81 and the actions taken by companies like Monsanto and Cargill have ensured that while Iraqis may no longer be under the thumb of Saddam Hussein, they’re trapped in a modern colonial struggle against an occupying force that seeks to control their livelihoods, their food supply and their cultural traditions.

Perhaps this should come as no surprise, considering Bremer’s ties to Kissinger. It was Kissinger who reportedly once said: “Control oil and you control nations; control food and you control the people.”

This type of control over agriculture and food production is a weapon of war and a tool of the oppressor. The U.S. has been using food aid and its role in global food production to advance its own interests since World War I.

Under the postwar trade regime, especially during the Nixon administration, trade pacts like the General Agreement on Tariffs and Trade emerged to advance a new global agribusiness export agenda.

Within a decade, the global food cartel was controlled by the U.S.-NATO empire’s most elite families. They started buying up all of the world’s major sources of food and seeds. This is why just a few companies — including Monsanto and Cargill — dominate the world’s grain and cereal supplies.

It’s also why these companies descended on Iraq once the Coalition Provisional Authority created an opening, destroying a once-flourishing agriculture industry. In the process, they destroyed the independence of Iraqi farmers and forced the Iraqi people to rely on foreign corporations for even basic sustenance.

Here to talk more about the struggles of the Iraqi agriculture sector during and after the Iraq War and what the Iraqi government is doing to rebuild the industry, is Dr. Nakd Altameemi.

Dr. Altameemi started his career at Iraq’s Ministry of Agriculture, eventually serving as director general of both Iraq’s State Board for Seed Testing and Certification and the Mesopotamia Seed Company. From 2008 to 2015, he joined the United Nations Food and Agriculture Organization as a consultant.

This article first appeared on MintPressNews.com and was authored by Mnar Muhawesh.