Hillary Clinton Lies About Attending Bilderberg While In Denver 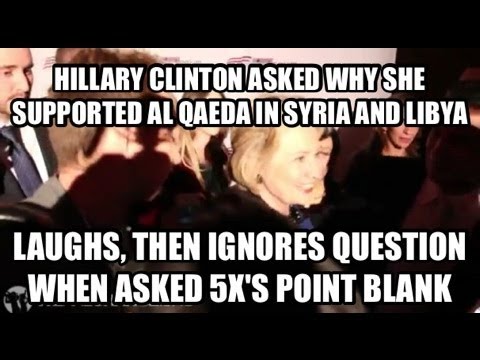 Although it seems like Hillary Clinton has already been selected as the 2016 President, she continues get hammered. Recently, Hillary had a shoe thrown at her, she had to choke on her own comments about being ‘dead broke,’ she was confronted by Luke Rudkowski about why she supported arming Al Qaeda and June 23rd, while in Denver, for the Global Clinton Initiative Conference, she was confronted about her attendance at Bilderberg Group, while signing her new book.

Even after being shown a picture of her at the secretive globalist planning conference, she still denied attending Bilderberg.

The person who posted the video, Kevin Fisch, asks her, “Hey Hillary, have you been to a Bilderberg meeting before?”
“No I have not.” – Hillary Clinton
“Isn’t this a picture of you at Bilderberg last year?” – Fisch
“I wasn’t there, so I don’t know who it was.” – Clinton
“Isn’t this a violation of the Logan Act? Did you write this book (Hard Choices) or did Ted Widmer?” – Fisch

This is how it’s done. When politicians are campaigning in public, we must ask the hard questions and spread the videos online. This video is great, because it’s only 46 seconds long, yet it raises many important questions. Please make this viral and don’t forget to make a donation to We Are Change.

Bruce Baumann – We Are Change Colorado