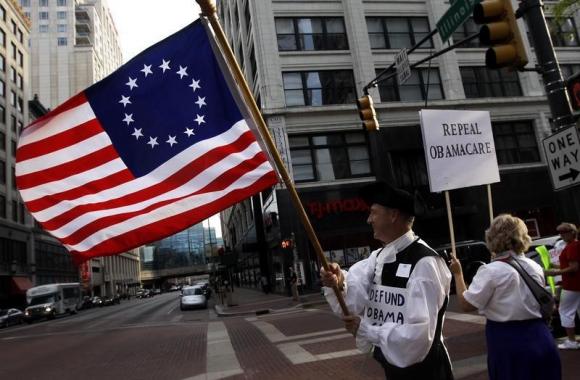 Paul Wheeler waves a flag while standing with a small group of demonstrators outside of the HIlton Hotel and Suites prior to former South Carolina Senator Jim DeMint, president of the The Heritage Foundation, speaking at a ”Defund Obamacare Tour” rally in Indianapolis August 26, 2013.
Credit: Reuters/Nate Chute

The U.S. House of Representatives added another notch to its lengthy record of Obamacare repeal votes on Tuesday by approving a measure that would scrap the healthcare law and direct oversight committees to come up with a replacement.

Defying a White House veto threat, lawmakers voted 239-186 on a measure to eliminate the complex web of federal subsidies, insurance reforms, taxes and regulations that have extended health coverage to millions of Americans since the Affordable Care Act became law in 2010.

The action now moves to the Senate, where Republican Senator Ted Cruz, a Texas conservative, introduced legislation for full repeal on Monday.

The influential conservative group Heritage Action for America called the House vote “the beginning of a multi-month effort” to send a full repeal legislation to President Barack Obama’s desk.

The White House threatened to veto the House bill, saying it would take away critical benefits from middle-class families and increase the federal deficit.

Before the vote, Obama met with 10 people who had benefited from his signature domestic policy. He told reporters the law was working “better than intended.”

Supporters of repeal are short of the two-thirds majority needed in both chambers of Congress to override a presidential veto.