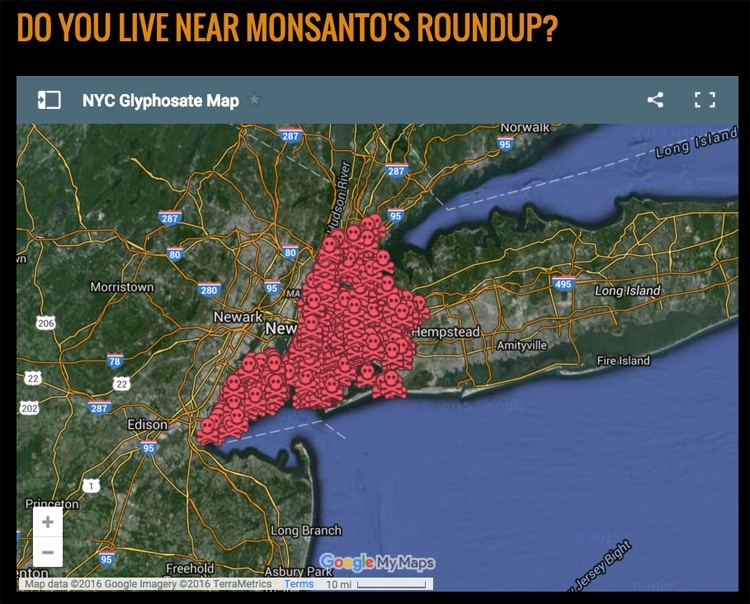 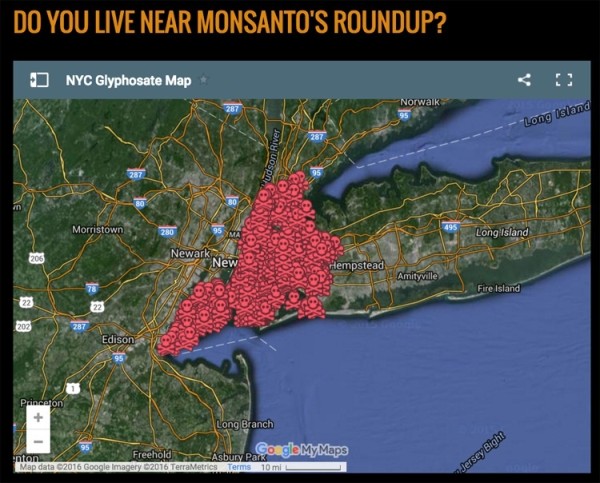 New York City residents can now find out if Monsanto’s Roundup is sprayed on their corners, parks, playgrounds and picnic areas.
The interactive map below will be presented to Mitchell J. Silver, commissioner of the New York City Department of Parks and Recreation at a meeting Tuesday by the the Black Institute, Reverend Billy and The Stop Shopping Choir, Stop The Spray and other members of the Coalition Against Poison Parks. The groups will demand an end to the use of Roundup and glyphosate, the active ingredient in Roundup, in New York City and full public disclosure.
roundupmap750
The groups are pursuing legal options to force the city to reveal all locations where glyphosate is sprayed. According to the Pesticide Use by New York City Agencies in 2014, published in May 2015, New York City applied glyphosate 2,748 times. Through a Freedom of Information Law request, the city has revealed only 2,000 locations of glyphosate in 2014. Data from Central Park and other areas managed by non-profit conservancies has not been shared with the public.
Before the meeting, there will be a choir performance in support of the Roundup Ban on the steps of the parks department headquarters at the Arsenal in Central Park in New York City. Members of the Lower East Side Girls Club and The Stop Shopping Choir will perform at 2:30 p.m. Members of the public are welcome to join the choirs in song.
Monsanto’s Roundup continues to be the major weapon in the New York City parks department’s arsenal of herbicides while scientific evidence that Roundup’s key ingredient, glyphosate, is toxic approaches the level of scientific consensus. The frequency of parks department’s use of Monsanto’s Roundup doubled since 2013 with 1,300 spraying events reported. In 2014, overall herbicides use reported by volume increased by 16 percent with a 9 percent increase in the amount of glyphosate applied by volume.
The World Health Organization recently reported that glyphosate is a probable carcinogen. Scientific studies have found that glyphosate causes non-Hodgkin’s lymphoma and other cancers, birth defects, celiac disease, allergies, asthma and chronic fatigue syndrome.
Glyphosate is persistent in body tissue, blood and breast milk in humans. The non-profit organization, Moms Across America, claims exposure to Roundup has cause pregnancy problems, including stillbirths.
read more