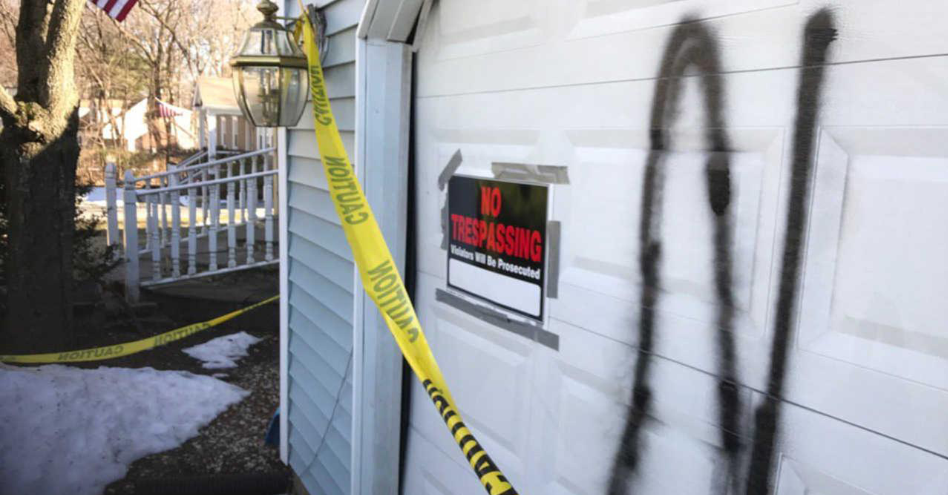 Stamford, Conn. — An interracial couple in Stamford, Connecticut, is being fined $100 a day by local government for failing to remove a racial slur that was spray painted on their garage door. Despite the fine, the common law husband and wife say the graffiti will remain until authorities “do their job” and find the person or persons responsible.

“I cannot believe it. At this time, someone could write this. Those times were supposed to be way back in the ‘60s and I was born in ‘61,” 56-year-old Lexene Charles told the Stamford Advocate back in mid-January when the incident took place. “It’s ridiculous for those things to be going on.”

Local police responded to the home of Charles, who is black, and his wife, Heather Lindsay, who is white, on a Saturday morning to discover someone had spray painted the n-word on the couple’s garage door.

Stamford’s assistant police chief called the incident “disgusting” and promised it’s “something we have under investigation,” yet over a month later the couple says little by way solving the case has happened — and that now the city is actually penalizing them for failing to paint over the slur.

“The city of Stamford has issued the couple a blight citation, which carries a $100 daily fine,” the Stamford Advocate reported Monday. For her part, Lindsay doubled down on her vow to keep the slur up until authorities find those responsible and “not just cover it up and sweep it under the table as they have done in the past.”

Lindsay claims the couple’s home has been vandalized several times and that a handful of their neighbors have hurled racial slurs at her African-American husband.

The case has caught the attention of the NAACP, and representatives of both local and state chapters of that organization held a conference at the couple’s Stamford home on Monday.

“For them to be called nig—-, it must be so hurtful that they can easily just erase the board and suffer within, quietly by themselves, and act like nothing happened,” said Darnell Crosland, legal counsel for NAACP’s state chapter. “And in fact, that’s what the Stamford police asked them to do. They were requested to take the sign down…and to just act normal, like nothing happened.”

Crosland, like the targeted couple, called on authorities to simply do their jobs:

The president of Stamford NAACP, Jack Bryant, called the incident a “scathing insult” that could have “a lasting effect not only on the family residing in that house, but also on Stamford as a community.”

As for the couple’s ongoing, daily fine, the city’s director of public safety, Ted Jankowski, defended it in an emailed statement:

“The neighbors were very upset when the incident occurred and truly felt for the couple. However, the residents who have condemned the racial incident are upset and are complaining about continuing to see the racial slur and how it is disturbing the peace in the quiet neighborhood.”

This article first appeared on TheAntiMedia.org and was authored by James Holbrooks