Is Tulsi Gabbard Legit? Or To Be Trusted? 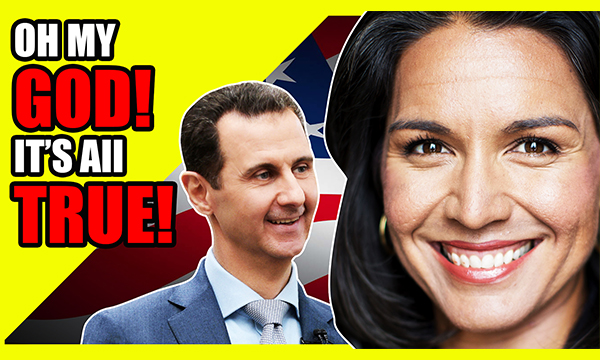 In this video, we give you the latest breaking news on Tulsi Gabbard and her run for president in 2020.

I really wanted to get into kind of Tulsi gabbard everything she’s been saying has been good but kind of like to good and she’s kind of running on this basic point that all of us agree with.

Where is not good the majority people don’t want war only Psychopaths want war and she’s really coming to the Forefront as this kind of Peace candidate but there are some questions about her because one it is kind of too good to be true if my opinion there’s something in my gut distrusting of politicians like always because she is a member of the Council on Foreign Relations but at the same time she’s just being hammered incredulously and I believe very incorrectly by the mainstream medium who’s accusing her and smearing her of being a Kremlin stooge and the questions that they ask her I mean just a couple minutes ago she was on the Morning Joe show and send their asking her is Assad a good person the Russian apparatus is there are probably going to be supporting your campaign how do you feel about that what Russia did you speak to people who are flabbergasted that she didn’t say that Bashar al-assad was an enemy or an adversary to the United States.

Disinformation campaign against her a lot of propaganda what do you think about her and how do you think she would do as president of the United States with the larger effects to the Middle East if she was in that position of power ended do you think she’s legit.

Question Trump also set the media also talked to him a lot but he.

What was the someone that cares about.

Worried that I have is people that will exploit.

She has resisted that story because.

The results of those interventions.

And I was very proud.

You want to prolong the pool..

I’ve been giving it a thousand turkey won’t invade at allowing military to take over.

Is it open ended.

It hasn’t stopped means that’s my concern I feel she’s a very open person she’s someone who wants peace.

That’s just the sense that I get.

I’m keeping a close eye on the situation definitely side I’d be like this is too good to be true but I think it’s happening in our unpredictable for policy I think that’s the right approach to definitely give here but she definitely was also in Syria on the ground she definitely keeps talking about a lot of things that make perfect common sense and the mainstream media establishment is totally after her but again good point similar situation with Donald Trump is.

And she did was because she.

And expose the fact that deep State elements in intelligence agencies on our taxes were financing radical islamist terrorists in that country she was one of the big.

Yeah there’s a huge thing that she did and and the very few people had the goal to do that one of the other people who did was Michael Flynn and he’s not in a good position right now with the government as well and the Deep State as well yeah thank you so much for your expert analysis in your help and and all your Insight where can people find out more information about.

This huge thing that she did to introduce a bill to stop arming terrorists but it’s interesting because he’s also a terrorist organization.

That was so prefer to do so.

And let’s be smart here not drink the Hope Kool-Aid but let’s keep a skeptical eye on it because I’ve been trying to get an interview with her for.

Three years now for a very long time I’m like trying to get an interview with her Ron Paul I talked to him as well he’s trying to talk to her also she’s very insulated so something to look out for beginning but yet again just be skeptical I think that’s the best advice that we can I want to thank you Parson girl for giving us the excellent advice and commentary the link to your subscribestar who will be in the description and really appreciate your time and really appreciate your efforts if you guys appreciate it as well don’t forget to share this video with your friends and family members because YouTube definitely won’t because of the algorithm shifts and a larger messages that we share hear you guys are more important than ever you without you this broadcast would it be possible and that’s why I always end every single video by saying.

Love you guys thank you again so much watching stay tuned for a lot more here on youtube.com we are.