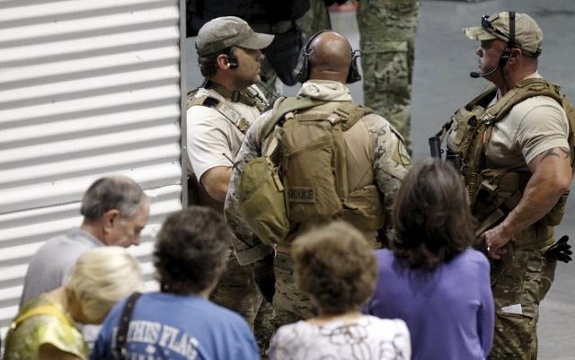 [Before going into the Telegraph’s article, I recommend you check out WRC videos on the true origins of ISIS and its implications on the global geopolitical scale. If it were not for the US and many other parties, there would be NO ISIS]

Islamic State fighters have claimed responsibility for the attempted shooting at a Texas anti-Islam event on Sunday night, in what is thought to be the first such attack on American soil.

The gunmen attempted to attack a meeting in Garland, near Dallas, where participants drew cartoons of the Prophet Mohammed.

Organisers knew that the event would be provocative, and it had caused a stir among extremists – who ten days before the attacks called for a Charlie Hebdo-style shooting.

One of the suspects was identified by ABC News as Elton Simpson, an Arizona man who was previously the subject of a terror investigation, citing a senior FBI official.

Police on Monday morning raided the Phoenix home of one of the suspected gunmen, FBI officials told CNN.

A week before Sunday’s shooting, the Transport Security Administration warned of an imminent attack.

The essence of the warning, according to a source speaking to The Intercept, is that “ISIS plans an attack on US soil.”

The Texas attackers have not been named, but one of the men thought to be behind the attack – going by the Twitter handle @atawaakul and the name “Shariah is Light” – tweeted his support for Islamic State of Iraq and the Levant (Isil) 15 minutes before the shooting.

His Twitter photo shows Anwar Al-Awlaki, the American-born leader of al-Qaeda in the Arabian Peninsula (AQAP), who was killed in a US drone strike in 2011.

He states that he has “given bay’ah” – sworn an oath of allegiance – to Amirul Mu’mineen, a title which is given in the Koran to the prince of the caliphs. Supporters of Abu Bakr al-Baghdadi, leader of Isil, refer to him as Amirul Mu’mineen. 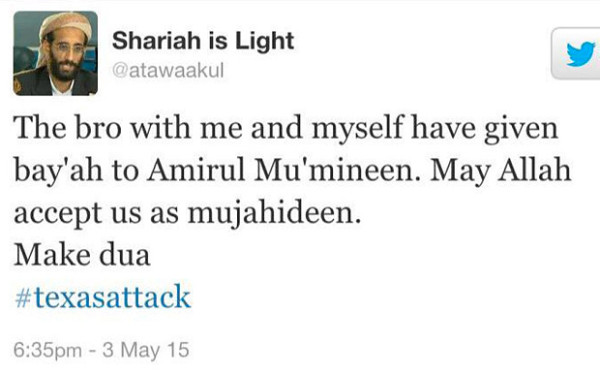 News of the shooting broke 15 minutes after the tweet was sent, at around 6.50pm.

Other tweets grabbed before the account was shut down suggested the individual behind the account was a recent convert. He made statements such as: “I don’t know Arabic” and “my fam didn’t trip when I became a Muslim”.

He and one other man drove to the Curtis Culwell Center, an indoor arena in Garland, northeast of Dallas, on Sunday evening. At the time an event organised by the controversial American Freedom Defense Initiative was being held, which included a $10,000 prize for the best cartoon of the Prophet Mohammed. Geert Wilders, the far-Right Dutch politician and anti-Islamic campaigner who is on an al-Qaeda hit list, was among the speakers at the event.

Texas police shot dead the two gunmen in the car park before they could begin their attack. One of the suspects, after being initially wounded by police gunfire, was seen reaching for a backpack and was shot again and killed, said Douglas Athas, mayor of Garland.

One security guard was shot in the leg, but released from hospital hours later.

And following the thwarted attack, Isil supporters claimed that the two gunmen were acting on behalf of their group.

The jihadist “Abu Hussain AlBritani,” – who the gunman recommended to follow in his final tweet – tweeted that “two of our brothers just opened fire at the Prophet Muhammad art exhibition in Texas,” and remarked: “They thought they was safe in Texas from the soldiers of the Islamic State.”

The jihadist behind the Twitter account is thought to be British Isil fighter Junaid Hussain, from Birmingham, who is believed to have travelled to Isil territory in June last year.

And ten days ago, the jihadi monitoring group SITE said that extremists were already calling for action against the Texas event.

On April 23, “Mujahid Miski,” believed to be account of Mohamed Abdullahi Hassan, an American jihadist reportedly fighting in Somalia, tweeted about the drawing contest.

“The brothers from the Charlie hebdo attack did their part. It’s time for brothers in the #US to do their part.”

He then followed up by posting pictures of US jihadists Zakaria Maruf, Farah Mohamed Beledi, and French jihadi Amedy Coulibaly, who was one of the three Paris terrorists in the January attacks.

“If only we had men like these brothers in the #States, our beloved Muhammad would not have been drawn,” Miski said.