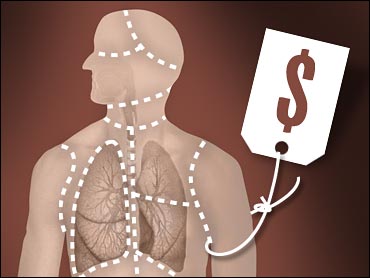 (AP) JERUSALEM – Israel has admitted that in the 1990s, its forensic pathologists harvested organs from dead bodies, including Palestinians, without permission of their families.

The issue emerged with publication of an interview with the then-head of Israel’s Abu Kabir forensic institute, Dr. Jehuda Hiss. The interview was conducted in 2000 by an American academic, who released it because of a huge controversy last summer over an allegation by a Swedish newspaper that Israel was killing Palestinians in order to harvest their organs. Israel hotly denied the charge.

Parts of the interview were broadcast on Israel’s Channel 2 TV over the weekend. In it, Hiss said, “We started to harvest corneas … Whatever was done was highly informal. No permission was asked from the family.”
The Channel 2 report said that in the 1990s, forensic specialists at Abu Kabir harvested skin, corneas, heart valves and bones from the bodies of Israeli soldiers, Israeli citizens, Palestinians and foreign workers, often without permission from relatives.

In a response to the TV report, the Israeli military confirmed that the practice took place. “This activity ended a decade ago and does not happen any longer,” the military said in a statement quoted by Channel 2.

In the interview, Hiss described how his doctors would mask the removal of corneas from bodies. “We’d glue the eyelid shut,” he said. “We wouldn’t take corneas from families we knew would open the eyelids.”

Many of the details in the interview first came to light in 2004, when Hiss was dismissed as head of the forensic institute because of irregularities over use of organs there. Israel’s attorney general dropped criminal charges against him, and Hiss still works as chief pathologist at the institute. He had no comment on the TV report.

Hiss became director of the institute in 1988. He said in the interview that the practice of harvesting organs without permission began in the “early 1990s.” However, he also said that military surgeons removed a thin layer of skin from bodies as early as 1987 to treat burn victims. Hiss said he believed that was done with family consent. The harvesting ended in 2000, he said.

Complaints against the institute, where autopsies of dead bodies are performed, at the time of Hiss’ dismissal came from relatives of Israeli soldiers and civilians as well as Palestinians. The bodies belonged to people who died from various causes, including diseases, accidents and Israeli-Palestinian violence, but there has been no evidence to back up the claim in the Swedish newspaper Aftonbladet that Israeli soldiers killed Palestinians for their organs. Angry Israeli officials called the report “anti-Semitic.”

The academic, Nancy Sheppard-Hughes, a professor of anthropology at the University of California-Berkeley, said she decided to make the interview public in the wake of the Aftonbladet controversy, which raised diplomatic tensions between Israel and Sweden and prompted Sweden’s foreign minister to call off a visit to the Jewish state.

Sheppard-Hughes said that while Palestinians were “by a long shot” not the only ones affected by the practice in the 1990s, she felt the interview must be made public now because “the symbolism, you know, of taking skin of the population considered to be the enemy, (is) something, just in terms of its symbolic weight, that has to be reconsidered.”

While insisting that all organ harvesting was done with permission, Israel’s Health Ministry told Channel 2, “The guidelines at that time were not clear.” It added, “For the last 10 years, Abu Kabir has been working according to ethics and Jewish law.”