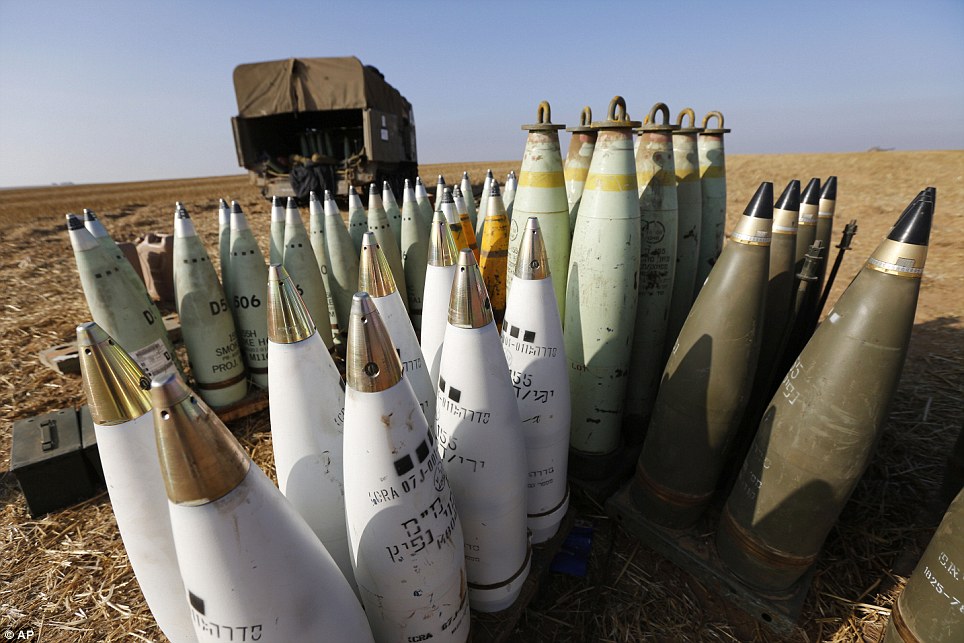 Israeli Prime Minister Benjamin Netanyahu said on Friday that he would press forward with his country’s military offensive In the Gaza Strip, telling reporters that there was ‘still more to go’ in the conflict that has already claimed more than 100 lives.
He defended the attacks by Israeli forces in the Hamas-controlled Gaza Strip, saying that they are part of a determined effort to halt rocket fire by Palestinian militants.
His comments come amid growing pressure from a number of international leaders to cease the military campaign – which has seen Israel attack more than 1,000 targets since Tuesday.

Netanyahu said he has been in touch with numerous world leaders, including President Barack Obama and the leaders of Britain, France, Germany and Canada.
He said he had ‘good discussions’ with his counterparts, telling them that no other country would tolerate repeated fire on its citizens.
‘No international pressure will prevent us from acting with all power,’ he added.
Dismissing a question about possible cease-fire efforts he said: ‘I will end it when our goals are realized. And the overriding goal is to restore the peace and quiet,’ Netanyahu said.
He also would not rule out the possibility of expanding the campaign of mostly aerial attacks into a ground war in Gaza, answering when asked whether such a move was possible that ‘we are weighing all possibilities and preparing for all possibilities.’
Israel launched the offensive on Tuesday in response to weeks of heavy rocket fire out of Gaza. At least 103 Palestinians, including dozens of civilians, have been killed, according to the Palestinian Health Ministry in Gaza. Palestinian militants have fired more than 600 rockets at Israel.

One rocket fired from the Gaza Strip struck a gas station and set it ablaze earlier Friday in southern Israel, seriously wounding one man, and the army said the condition of a soldier wounded by rocket shrapnel on Thursday had worsened.
But there have been no deaths on the Israeli side, in large part because of a new rocket-defense system that has intercepted more than 100 incoming projectiles.
Israel’s allies have backed the country’s right to self-defense, but they have called for restraint. U.N. Secretary-General Ban Ki-moon has expressed concern about the heavy civilian casualties in Gaza, and on Friday, the U.N.’s top human rights official said the air campaign may violate international laws prohibiting the targeting of civilians.
‘We have received deeply disturbing reports that many of the civilian casualties, including of children, occurred as a result of strikes on homes,” said Navi Pillay, the U.N. high commissioner for human rights.