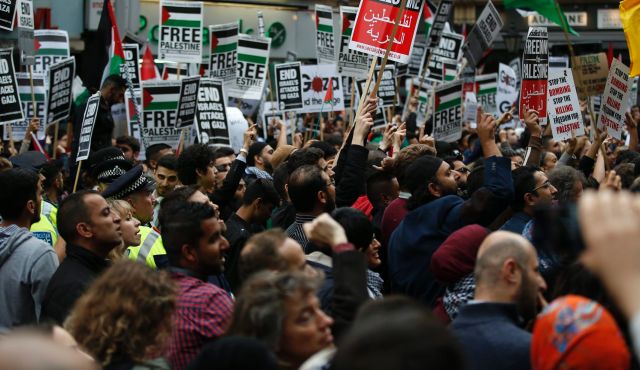 Thousands of pro-Palestinian demonstrators turned out on the streets of London, Paris, and Oslo on Friday to call for an end to Israeli military strikes on Gaza.

Several thousand people crowded the streets outside the Israeli Embassy in west London, waving placards that read “Gaza: End the Siege” and “Freedom for Palestine.” The crowds blocked an entire road, and several protesters managed to climb on top of a double-decker bus stuck in traffic, but police said the protest was largely peaceful.

Norwegian news website The Local reported that some 3,000 protestors gathered in front of the Norwegian parliament in Oslo calling for the end of violence in the region. The event was organized by the Palestine Committee of Norway and other organizations.

A smaller protest took place in Paris Friday, where about 100 people demonstrated near the French Foreign Ministry.

Demonstrators waved Palestinian flags. One woman shouted “Palestine will survive” had the flag painted on her cheeks.

Stephane Frappreau, who identified himself as Jewish, said the demonstrations were about “defending humanity and about stopping the massacre.”

“I think that people tend to forget that Palestinians are people who are suffering, kids and women, who are dying every day,” Frappreau said. “And I think that people shouldn’t confuse things or come to quick conclusions, because being against Israel as we are today is not about being anti-Semitic.”