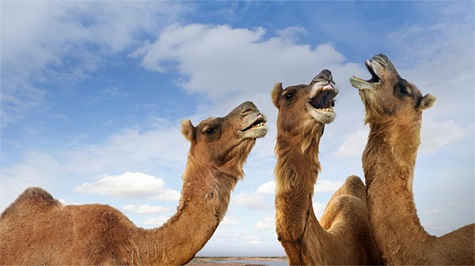 Israeli security forces have detained a camel alleged to have “infiltrated” a “military zone” near Bethlehem, taking the level of arbitrary arrests and harassment of young Palestinians to a new low.

The head of Rashaida village council, Fawaz Rashaydeh, told Quds news agency that Israeli soldiers arrested the camel belonging to Moslim Younis Rashaydeh and took it to the Ma’ale Adumim settlement near Bethany. The soldiers arrested the camel’s owner at the same time and forced him to pay a fine of 2,000 shekels for the return of the animal and an additional 600 shekels as a “transfer fee”. Rashaydeh accused the Israelis of acting with intent to drive Palestinians from their land to the east of Bethlehem.

According to Mr Rashaydeh, this is not the first time that the occupation forces have confiscated and detained livestock belonging to local citizens. “Over the past few years Israel has confiscated several herds of cattle belonging to Palestinian farmers from the village,” he said.

The village head appealed to the relevant authorities and institutions to intervene and stop Israeli violations against Palestinians and protect their livestock. The farmers face the loss of their livelihood due to the Israelis taking ever more of their pastures as well as their animals.