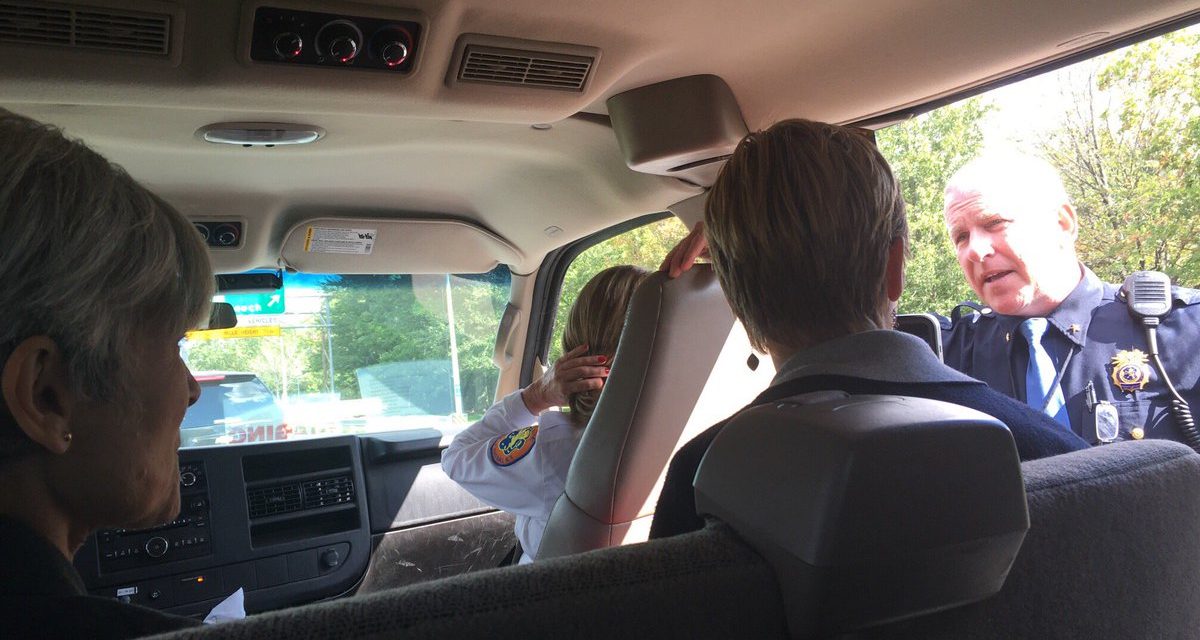 Green Party presidential candidate Jill Stein, who is barely making a blip in the polls, is desperate to get into the debates — and by Monday afternoon she had already been escorted off the Hofstra University campus.

During the 2012 election, Stein was arrested at Hofstra University after handcuffing herself to a chair in a attempt for press and a spot on the stage.

Hours before today’s debate, Stein was spotted boarding the media bus used to shuttle credentialed media through the premises. As she is not credentialed to be there, law enforcement officials sought to track her down.

The Stein campaign claims that they had a legitimate reason to be going to the media area, as she was about to do interviews with the press.

.@DrJillStein being escorted off the campus of #Hofstra: "This is what democracy looks like." #debatenight #Debates2016 pic.twitter.com/14plxTMqBN

“We were there under legitimate pretenses,” Meleiza Figueroa, Stein’s press director, told USA TODAY. But as the group walked from one broadcast outlet’s setup to the next they were approached by Hofstra security and Nassau county police. The officials told the Stein contingent that after the interview they “would be escorted off campus immediately, so that’s exactly what we did — we complied,” Figueroa said.

We were immediately escorted off of the Hofstra campus after the press conference just now and told not to do any more press. #debatenight pic.twitter.com/ZFr49NPMuH

The Green Party is now bussing in supporters who are scheduled to gather outside the debate at 5:30 and attempt to help Stein crash the event.

“Our supporters are going to attempt to escort Jill in. We are expecting they will be unsuccessful,” Figueroa said. Since it is unlikely she will make it past the door, her press director stated that she “be holding a people’s debate outside the crowd.”

Desperate to grab some of the jaded Bernie Sanders voters, Stein was also arrested earlier this month for spray painting a bulldozer at a protest against the Dakota Access Pipeline in North Dakota. She is facing charges of trespassing and vandalism.

While some of Stein’s methods may seem, well, petulant and some have even said “pathetic,” it is pretty disturbing that all four major parties are not allowed in the debates. The magic number to get a spot on the stage is a 15% average in the polls, and unfortunately, Stein is averaging barely 3%.

On the other hand, Gary Johnson has been generating much more buzz, though he has not broken 10% either. His recent national polling average stands at 9%. He is still attempting to reach the threshold to be included in the later debates this Fall.

Either way, it is kind of amazing that in a race with the queen of corruption, Hillary Clinton, Stein is the only one potentially facing charges.