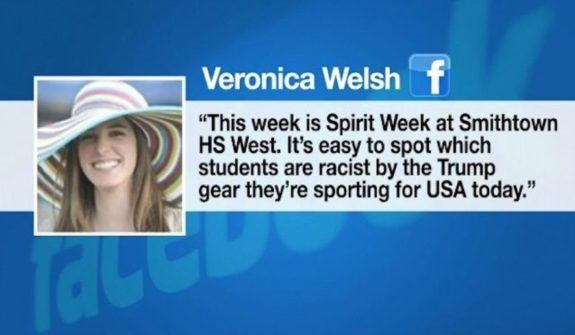 A teacher at Smithtown High School West in New York has been disciplined after taking to Facebook to call her Donald Trump supporting students racist.

Veronica Welsh, a world language teacher, has been administratively reassigned after a screenshot of her post began to circulate and spark outrage in the community.

“This week is spirit week at Smithtown HS West. It’s easy to spot which students are racist by the Trump gear they’re sporting for USA Day,” Welsh posted on the social media platform.

The superintendent of the school district, James Grossane, has called the post an “extremely unfortunate incident.”

“Please be advised that we are handling this in a professional manner and all appropriate disciplinary actions are being taken. This is an extremely unfortunate incident and these actions are not promoted by the Smithtown Central School District Administration and Board of Education, nor do they reflect the attitudes of our students and staff,” Grossane said in a statement.

Welsh also lashed about the Republican candidate on social media in May. The teacher posted that she “feels shitty” when she sees former students supporting the major party nominee.

“I feel really shitty when I see former students posting things on Facebook that are pro-Donald Trump I’m sorry for failing you at Smithtown High School West. I should have done better,” Welsh wrote.

College Fix fired back at the teacher, reminding her that she doesn’t even teach politics.

“‘Failing you’? You’re a world language teacher, Ms. Welsh. The only course which should be broaching the topic of politics at school is something like history, or government, or civics. And from where would you gather the notion that it is your duty to ‘educate’ students on the ‘proper’ choice of presidential candidate? Was your ed school? Some other class or professor?” College Fix asked.

The post has since been removed, but parents have continued to speak out against her accusations against their children.

“There’s no reason for her to pass judgement on those kids on a social platform,” one parent told CBS.

“It’s not a good idea because then like she influences the students with the same ideas,” another parent stated.