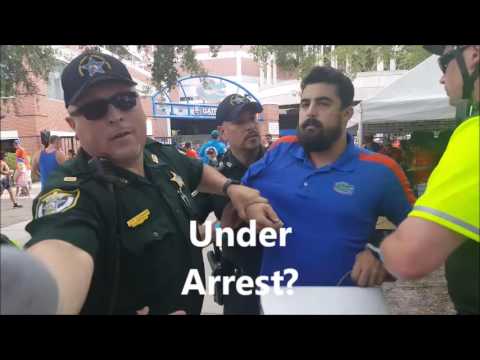 Journalist Bob Tuskin was falsely arrested and assaulted by police at the University of Florida on Saturday.

On the eve of the anniversary of 9/11 and a Gator football gameday, Tuskin dared to ask people in public what they thought of the biggest moment in recent world history, blaspheming the true religion of college towns across America – college football.

Tuskin asked a policewoman on a bike, “Can you describe to me what this looks like.” Then everything went down hill from there. The officer responded, “No, uh-uh, what are y’all doing guys? Shut it down for a minute, what are you doing?”

Tuskin responded, “We’re filming a little exercise called the building 7 challenge. We’re asking people to watch the footage of this building and it’s collapse and describe to us what it is they see.”

The obvious answer is that it looks like a controlled demolition – a building doesn’t collapse like WTC7 did without a catalyst to do so.

Tuskin was then told “You’re going to have to move onto the sidewalk” by another officer. Tuskin responded saying “Okay is the University of Florida officially trespassing me off property right now?”

The officer responded, “Well were asking you to leave right now.” When Tuskin asked the reason he was being asked to leave, the officer told him that “they had received complaints that he was harassing people walking by.”

Tuskin said, “I have complaints about people harassing us too, it works both ways.”

The officer then got more aggressive with Tuskin, telling him “This is how it’s going to work you are either going to move or you are going to jail.”

“So you are notifying me that I am trespassing?” Tuskin asked, closing his laptop and preparing his equipment to leave. “Alright, we are now leaving under the notification of trespassing.”

As Tuskin was packing up his equipment, he asked the officer for a formal written trespassing notice, which is his right. The officer then grabbed Tuskin and his microphone saying, “Yes in fact you are under arrest.”

“I am not resisting what am I being charged with officer?” asked Tuskin.

The officer said his charge was “trespassing without…” and didn’t bother finishing his sentence, realizing his phony justification for this false arrest was being recorded on video, and that anything he said would likely be used against him in a court of law.

The officer then threatened Tuskin’s cameraman Ed Sanders, who recorded the whole incident.