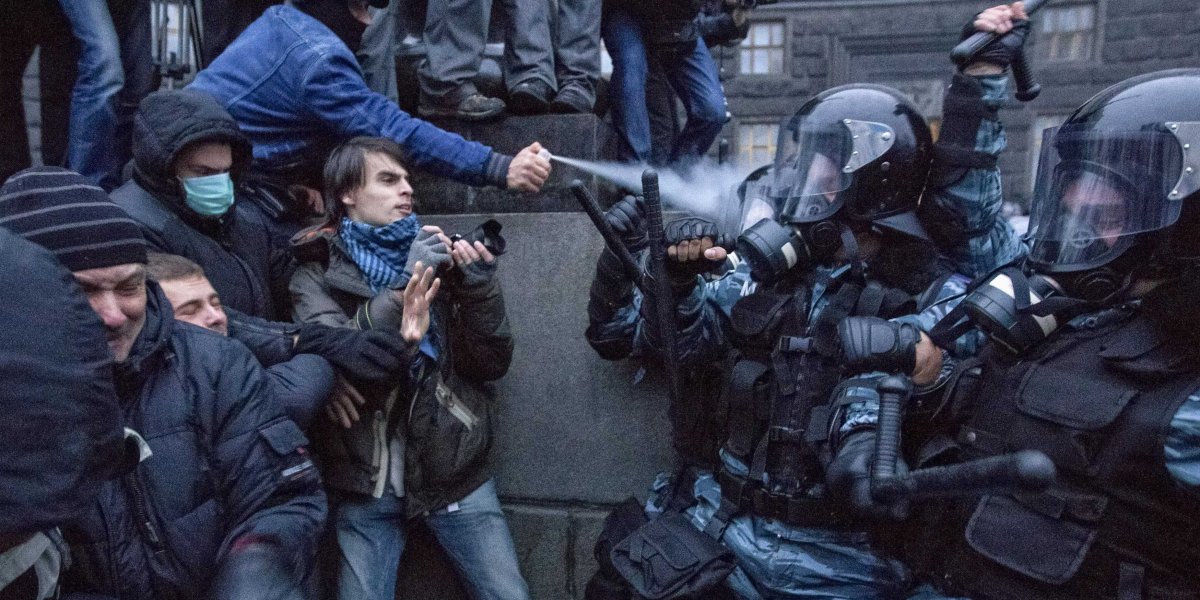 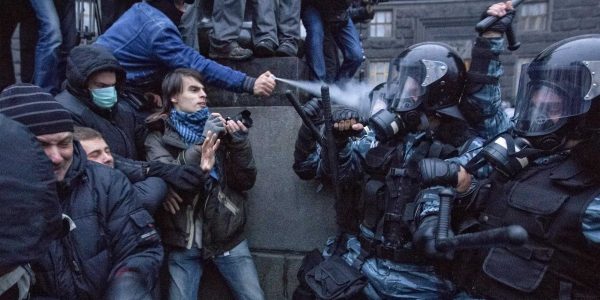 Wednesday is Ukraine‘s Day of National Unity, but the country has never felt so divided.

At least three people have died in Kiev, the first casualties of a protest movement that has rumbled on for two months before bursting dramatically into violence over the weekend.

Two protesters were shot dead during clashes with police, who attempted to take back control of the city centre. Prosecutors confirmed earlier claims by the protest leaders that the pair had been shot with live ammunition. A third protester died after falling from a high column at Dynamo Kiev’s football stadium while fighting with police, Reuters reported.

Oleg Musiy, the coordinator of the medical service at Independence Square, told a pro-opposition radio station that another two people had been killed, though this could not be confirmed.

As President Viktor Yanukovych held long talks with the trio of opposition leaders who have led the protests for the past two months, the deaths seemed likely to further inflame the tense situation in the country.

Parts of central Kiev resembled a battle zone as thick clouds of smoke filled the air and the sound of stun grenades rang out. Police shot at demonstrators with rubber bullets, and rumours swirled that a storm of the main protest encampment, the heavily barricaded Independence Square, could begin at any time. At one point, police deployed an armoured personnel carrier to back up their movements.

Martial law was effectively declared at 4pm local time, as shops, hotels and other businesses in the area surrounding the hub of the protests were reportedly ordered to close their doors for the day. A full-on storm was not immediately forthcoming, however.

Riot police pulled back from further clashes but were involved in a protracted standoff with protesters near the Dynamo Kiev football stadium overnight. People brought thousands of tyres to create a blazing wall in between the police lines and the protest barricades. At midnight, a full-scale firework display was launched, with the rockets aimed horizontally at police. On Independence Square, the already formidable barricades were augmented with more sacks of snow, metal railings and tyres.

The first attempts to push back protesters came as dawn broke, amid a swirling blizzard. Police began their assault on the impromptu barricades on Hrushevskogo Street, where clashes have been ongoing since Sunday evening. Videos circulated of the police beating and kicking protesters, many of whom were hurling rocks and molotov cocktails at officers in scenes that shocked residents of Kiev. Political protest has been a way of life here since the 2004 Orange Revolution, but before this week, rallies have never descended into violence.

Police launched another attack on protesters shortly after midday Kiev time (10am GMT), dispersing a crowd of thousands of people, moving them hundreds of metres back. They used teargas and rubber bullets and beat fleeing protesters with sticks. Some people were arrested. Then thousands of policemen regrouped into new lines to take shelter from stones being hurled at them.

Even as his riot police were on the attack, Yanukovych released a statement urging them to “regulate the conflict in a pe

aceful way” and saying he was against “bloodshed and forceful methods”. He asked the opposition to hold talks and demanded that people “not heed the calls of political radicals”.

Vitali Klitschko, the opposition leader and former heavyweight boxer, called on Yanukovych to announce snap elections as a way to resolve an ongoing political crisis.

“I know that this very second he [the president] is watching this live broadcast. You, the president, you know that snap elections will change the situation without blood, and we’ll do everything to achieve this,” Klitschko told the crowd in Independence Square on Wednesday evening. He added that talks with Yanukovych that started on Wednesday would have to continue on Thursday, otherwise “we will go on the attack”.

The prime minister, Mykola Azarov, struck a defiant note, blaming the victims for their own deaths and saying that the government had “no other option” but to use force against protesters.

“The participants of these disturbances cannot be called peaceful. These are criminals, who are disturbing order. I want to officially state that the victims are the responsibility of the troublemakers.”

Azarov said terrorists were threatening the lives of ordinary citizens in Kiev, and that the “criminal” actions of protesters would be punished and suggested further force was possible. He was due to appear at the World Economic Forum in Davos later on Wednesday, but his invitation was reportedly withdrawn.

Earlier the protesters reconstructed their barricades as thousands came to support them.

In a letter read out by her daughter Eugenia in Independence Square, Yulia Tymoshenko called on the protesters to continue their struggle. “The blood of these heroes of Ukraine lies on the hands of Yanukovych,” the letter said. “If we, Ukrainians, forgive him this, then we will deserve everything he will do to us later.”

Vasyl, 76, a pensioner from the central Cherkasy region, said: “They [the authorities] provoked this. We are unarmed but nevertheless they are afraid of us.” His friend Pavlo, 60, wearing stripes in the colours of Ukrainian and EU flags, said he came to support the protesters and was ready to throw stones at police.

“The blood is the fault of the convict [Yanukovych] and his party. We want these occupiers to leave Ukraine.”

An exhausted Orthodox priest with a huge cross around his neck trudged between the lines, trying unsuccessful to bring calm. “I’m here to placate the violence. My congregation is here,” he said.

Yuriy Lutsenko, a Ukrainian former interior affairs minister, called on riot police to stop fighting against the protesters. “Soldiers, if you stand here we will become Russia and you will have to go and fight in Chechnya,” he said through a loudspeaker, addressing lines of police from a minivan in the middle of the crowd. “This is not your war. This is a war of the Ukrainian people against the mafia.”

The protests began when Yanukovych turned his back on a planned association agreement with the European Union, citing financial pressure and the need for closer ties with Russia. They have since grown into a more general protest against Yanukovych’s government, and have also attracted a noisy minority who hold radical far-right views.

Condemnation of the violence came in a torrent from across Europe. Carl Bildt, the Swedish foreign minister, described the situation as extremely serious. The EU’s response remains to be seen, he said, but “it won’t be business as usual”. José Manuel Barroso, president of the European commission, said he was shocked at the deaths. He added: “I would like to explicitly underline the fundamental responsibility of the Ukrainian authorities to now take action to de-escalate this crisis and, in particular, the need for them to engage in a genuine dialogue with the opposition and with civil society on the ways to overcome this deep crisis.”

The United States revoked visas to several Ukrainian officials on Wednesday over the violence in November and December of last year.

The main voice of support for tough action has come from Moscow, where on Tuesday, foreign minister Sergei Lavrov accused European politicians of “fuelling” the violence in Ukraine, and noted that in any European country, the seizure of public buildings and violence against police would also be met with force.