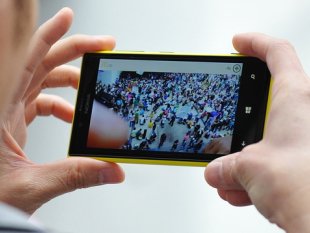 As smoke and flames billow upward from the streets of Ukraine’s capital city Kiev after days of increasingly violent civil unrest, protesters have discovered that the Ukrainian government is using cell phones to pinpoint exactly when and where clashes with riot police are occuring.

This raises the possibility that demonstraters who have not been arrested are being registered on a watchlist maintained by the Ukrainian government, which recently passed a law making it a crime to participate in a demonstration. Those with cell phones who were near the clashes received the following text message from their cellular service providers: Dear subscriber, you are registered as a participant in a mass disturbance.

The immediate cause of this week’s protests was rejection of a set of laws passed by the government hindering the Ukrainian public’s right of assembly and free speech. Those measures were enacted after massive anti-government protests roiled the nation in 2013. The current protests began when the Ukrainian government turned down a trade deal with the European Union, in order to form a closer alliance with Russia.

The surveillance capabilities of the Ukrainian government recall the capability of the NSA in the United States to track people’s movements with the use of cellular information. The American agency logs 5 billion records a day on the locations of cell phones used worldwide, and also “incidentally” acquires information on the whereabouts of domestic cellphones, according to the Washington Post.

The NSA also has had the ability to extract information, including text messages, address books, geolocation and voicemail, as well as activate microphones and cameras, in certain generations of iPhone since at least 2008.

In last week’s announcement about reforms within the NSA, President Obama said he no longer wants the agency to hold onto the phone records of private citizens, and has called for an independent third party to be created for this purpose. However, the government will continue to hold onto phone records until then. Leading NSA critic Glenn Greenwald said that the president’s proposed changes are tantamount to “a PR gesture” meant to “calm the public and make them think there’s reform when in reality there really won’t be.”