LAPD in STAND OFF with Call of Duty STATUE! 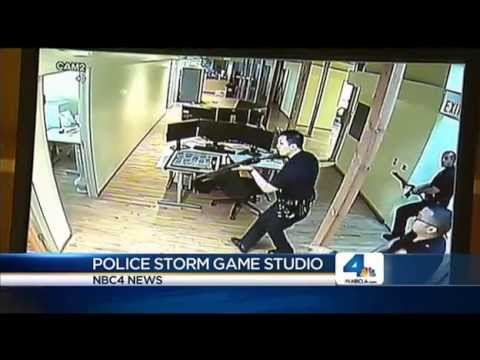 It sounds like something from the Onion or maybe an episode of the Simpsons, but police in Los Angeles got in a stand off… with a Call of Duty promotional statue.

Officers from the Los Angeles Police Department stormed the headquarters for the Los Angeles-based independent game studio Robotoki. The company’s designer had pressed the building’s “panic” button for an unrelated issue. But, studio founder Robert Bowling explained, that this might have been all there was to the story, if it weren’t for the life-sized Call of Duty statue in the window that cops thought was a sniper.

The LAPD cops got in a tense standoff with what turned out to be a life-sized statue of Call of Duty: Modern Warfare 2‘s Simon “Ghost” Riley.

Naturally, the Call of Duty statue did not comply with police orders to drop its “weapon.”

Bowling emphasized that the panic alarm was not any sort of prank or publicity stunt. Instead, he explains that “our studio is equipped with a ‘panic’ alarm in case of an armed threat, which was installed yesterday,” Bowling said.

“One of our designers, who shall not be shamed, pressed it on his way out because apparently when boys find buttons that they are unsure of, their first instinct is to push it.”

The alarm was a precaution, “as game developers receive their fair share of death threats.”

“So after pushing it, everyone went home for the day, leaving their lonely studio head to receive the assault of their actions,” he continued.

Four officers stormed the front of the building around 7:10 p.m. when they realized there was no way to get in from that side. That’s when they moved to the back of the building where the entrance to Robotoki’s is located.

When they saw Bowling’s life-sized statue “with his gun at the ready,” they made an entry.

“I was in my office when they arrived and saw them coming up our stairs, guns drawn,” Bowling recalled. “They yelled for me to put my hands up and walk towards them slowly, then took me into custody and out of the studio until they cleared the rest of the rooms and floors.”

They were at a loss to figure out what happened, “until we reviewed the security footage and saw our designer’s curiosity to be the cause.”

Watch the local report below…