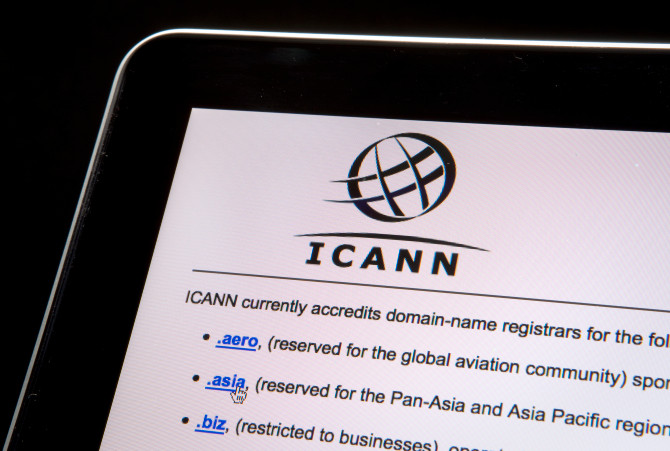 Top-level domains are listed on the Internet Corp. for Assigned Names and Numbers website in New York City on Jan. 12, 2012 SCOTT EELLS/BLOOMBERG VIA GETTY IMAGES

On July 25, 2012, news outlets reported that several internet companies, including Google, Amazon, eBay and Facebook were founding a new lobbying group. Michael Beckerman was appointed as President and CEO of the what the called the New Internet Association, set to publicly launch in September 19 of that year.^ The New Internet Society, The Internet Infrastructure Coalition, Net Choice, ARIN and a number of private individuals have filed something called an “amicus brief” [PDF] in Texas court on the eve of  the now noctorious IANA – NATO hand-over, the amicus seeking a temporary restraining order against the Department of Commerce (DoC).

The suit, brought by four states’ attorneys generals,Texas Attorney General Ken Paxton was joined by Arizona Attorney General Mark Brnovich, Oklahoma Attorney General Scott Pruitt, and Nevada Attorney General Adam Paul Laxalt. The lawsuit was filed in Texas in U.S. District Court Southern District of Texas, Galveston Division, and seeks to stop the handover of the IANA contract from the US government to the non-profit ICANN at the stroke of midnight on Sep.30 – when the current contract ends.

“Few Americans are aware of the serious threat posed by this impending transition.. the UN’s Internet takeover scheme” according to The New American

The lawsuit claims that the move would put at risk the First Amendment online, and could lead to ICANN simply deleting critical parts of the internet’s naming systems at some future date.

However, the State sponsored internet organizations argue that those claims are based on “fundamental inaccuracies regarding how the relevant Internet technologies work and the role that IANA functions have played.”

Republican presidential candidate Donald Trump’s campaign weighed in on the issue, according to Ars Technica:

The Republicans in Congress are admirably leading a fight to save the Internet this week, and need all the help the American people can give them to be successful. Congress needs to act, or Internet freedom will be lost for good, since there will be no way to make it great again once it is lost.

The DoC agrees, and in its own filing [PDF] has also argued that the states’ attorneys general do not have standing.

The hearing – which is happening now – could delay the planned transition and possibly pull it past the elections in November, if the judge, George C Hanks, Jr, decides there is a case to answer. If the restraining order is approved, it could disrupt the entire transition that has been two years in the making; if it is not, ICANN will assume control of the critical IANA functions on Saturday morning.

According to James Corbett, Michael Dean, and James Evan Pilato, the IANA “The internet take-over is no Take-Over at all“, and also in a recent episode of the Corbett report podcast offers some practical and readily accessible solutions that can currently completely subvert the ICANN system. (video and other helpful links below)

Contrary to popular belief, America doesn’t really own the Internet. But it does, currently, oversee the Internet Corporation for Assigned Names and Numbers (ICANN), the nonprofit entity that controls the critically important Domain Naming System (DNS), which is responsible for coordinating the domain name hierarchy and IP addressing for the entire Internet. Mans have called the DNS system essentially the Internet ‘phone Book’.

In August it was announced that, by prior arrangement, ICANN will be cut loose from it’s sole government steward, the U.S. Commerce Department’s National Telecommunications and Information Administration (NTIA), on the 1st of October 2016 , and then would become answerable to multiple stakeholders worldwide, including countries, businesses and technical bodies, some of whom may not be friends with the united states.

More Information will come Follow We are change on all our platforms for updates.

Story #2: US Set To Relinquish “Internet Stewardship” On Oct. 1st

How IT Works Domain Name System

The Censorship Solution with Michael Dean