LEAK OUT OF BILDERBERG: ELITIST TO TALK GLOBAL TAX AND INTERNET ID 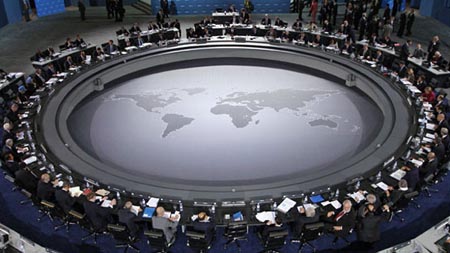 A leak has emerged out of the secretive Bilderberg Group

The globalist elites are reportedly discussing implementation of an Internet ID which will kill anonymity and a global tax which will include financial transactions and air and sea travel.

In the U.S., the government has been fighting to control the internet with various bills including SOPA, ACTA, PIPA, CISPA, and CISPA 2.0. In the U.K., a “hate crime law” just passed that will allow the U.K. government to censor free speech. The Internet ID law has already been proposed by the European Commission, while in the U.S. back in 2011 the same ID system was proposed by Obama .

The accusation that Bilderberg wants to censor free speech should be surprising to anyone, considering their abusive treatment of journalists covering their event.
Implementation of such a law globally would have a chilling effect on peaceful dissent as well as give social media owners such as Facebook and Twitter a way to
permanently ban users who break their terms of service agreements.

With a recent discussion where tech giants said they were going to tackle online hate speech in 24 hours it should scare the hell out of everyone. Freedom of speech is on life support – and a law allowing the government to know everything you purchase online, every website you visit would further create an Orwellian dystopia in society.

A tax on oil at the well-head, a supplementary charge for international financial transactions, and a green tax on all air and sea travel will be sold to the public under the disguise of addressing environmental concerns and helping people in third world countries. What everyone is missing though, is that a global tax would need a global government to operate it. Enter the friendly folks at the United Nations.

This right here is the New World Order blatantly in our faces and the mainstream media is ignoring it and will continue to because the elite own the media — its a monopoly. More now then ever independent media needs your help get the word out spread the word about We Are Change. We are only as strong as our supporters, without you we are nothing. If the Internet ID goes into effect it could mean the end of independent media.

The Elite can’t have their New World Order with us in the way – too many people are waking up and turning to alternative media and  not trusting the main stream media anymore. Only 40% of Americans trust the media — and that number may be far lower.

So donate and help us out  to destroy the main stream media for as little as $1 a month you can become a warrior in the fight against the global elite and justice sit at ease knowing you did something to aid this battle.

Stay tuned to We Are Change for further updates as they come out of the Bilderberg conference and more news.