As we have been reporting on since April beginning today politicians, bankers, influential leaders, and CEO’s of major global businesses, even actors, journalist, and pundits will be coming together for the 64th official Bilderberg group meeting. Which will be taking place over the next three days at the Taschenbergpalais Hotel in Dresden, Germany,  as usual the official agenda will be quite different from what will really be discussed (watch theses video’s for a full breakdown).

The conference area has been locked down tight, surrounded by hundreds of heavily armed guards, cast iron fences, and concrete barriers.

The Bilderberg Meeting is  notoriously secretive in its discussions which take place under Chatham House rules (nothing can be revealed), and regularly attracts demonstrations against what critics describe as a global meeting of western capitalists, politicians and academics who wield great power behind the scenes. 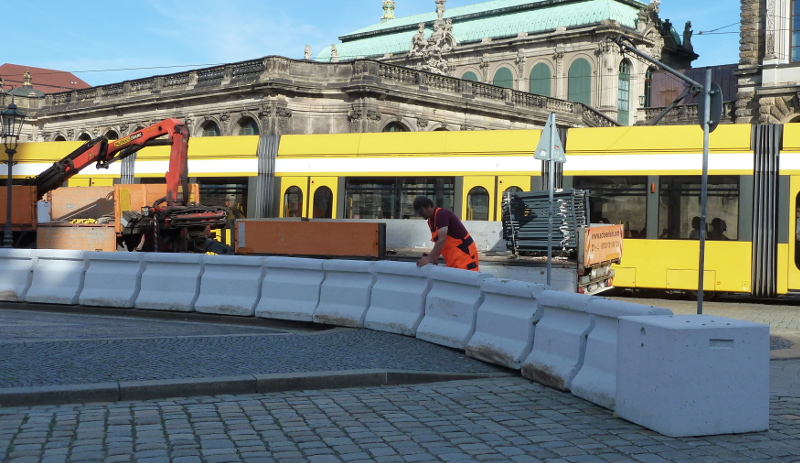 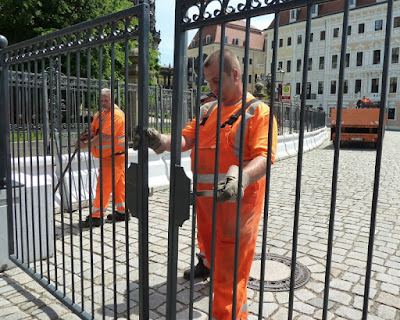 “Workers are bullied into silence, many times we have been told by employees that they would be fired if they spoke with us.” Luke We are change

No journalists are allowed to report on proceedings, however it will be attended by Richard Engel, chief Foreign Correspondent, NBC News, John Micklethwait, Editor-in-Chief, Bloomberg LP and Zanny Minton Beddoes, Editor-in-Chief of The Economist, which is owned by Rothschild, a name which figures intimately in all Bilderberg events.

Other visitors are certainly not welcome at the premises:

Yep this sign was just confiscated, there is no free speech allowed at Bilderberg the police will steal your signs because they are “illegal” VIDEO – https://www.facebook.com/LukeRudkowski/posts/10153530543411906

Later she was ‘Reportedly arrested for the Sign and for having a “tent”. Read more. http://bit.ly/25Oaofj

Journalist Max noticed 8 police cars pull up just as we got to the airport to document Bilderberg members arriving.

Starting at about 7:00 Am Dresden time, this years ‘participants started to arrive at the Dresden Airport, of course in private jets, and ushered through the back gates in tinted limousines.  Our day started off with Journalist Max Bachmann noticing a group of about 7-9 cars pulling up to the gates as we arrived ourselves to the airport, this was quickly followed by local police who were ordered to Intimidate Journalists Dan Dicks from Press for Truth. With ‘case folders in hand they said “that if any photos or videos of police ended up online that they would be suing”. Using intimidation and threats of violence have been a common tool to conceal tyrannical governments through out history. Don’t forget that what these guys are there covering the stories for us the normal people, we are not funded by George Soros or the Rothschild globalist all this is made possible by you our viewers. Consider contributing to the war on global tyranny we cannot do it alone, this is our job, and it will only continue to be if you enable us though your donations. Send in your Support for Luke Rudkowski and the rest of the Team Pulse Change, and We are change crew. We can only grow with you help !

Donate Now To help Grow We Are change.

At about 7:20 Am the Bilderberg attendees started to arrive in their private aircraft and be scuttled into the limos that would be taking them to the hotel. He is a photo rundown compiled by Luke from We-are-change.org, Dan Dicks From Press For Truth, Paul Joseph Watson from Prison Planet, andd Charlie Skelton from The Guardian.

Bilderberg members are still arriving via private jet & hanger thru the back exit which makes them impossible to ID pic.twitter.com/wAdQKKBUbb

Henry Kissinger just hobbled into the Bilderberg hotel, with ALOT of luggage pic.twitter.com/Wlfa3dukiP

2 bits of good news: Kissinger has arrived, and the 2 detained protesters have been released w/o charge. #Bilderberg pic.twitter.com/WsYWwbcEpD

Airbus chief Thomas Enders not ashamed to show his face at Bilderberg. pic.twitter.com/poFLEoatQI

Thomas Enders, CEO of Airbus Group, arrives at the Hotel Taschenbergpalais Kempinski Dresden for the 2016 Bilderberg Group conference on June 9, 2016 in Dresden, Germany. The Taschenbergpalais is hosting the 2016 Bilderberg Group gathering that will bring together 130 leading international players from politics, industry, finance, academia and media to discuss globally-relevant issues from today until June 12. A wide spectrum of groups have announced protests to be held nearby. Critics charge the secretive nature of the Bilderberg Group annual meetings is undemocratic.

Kissinger's pet academic Niall Ferguson. He looks like that because of the vast hard-on he's got for money & power. pic.twitter.com/M6Bn1h6veJ

Sam Altman, President of Y Combinator, arrives at the Hotel Taschenbergpalais Kempinski Dresden for the 2016 Bilderberg Group conference on June 9, 2016 in Dresden, Germany. The Taschenbergpalais is hosting the 2016 Bilderberg Group gathering that will bring together 130 leading international players from politics, industry, finance, academia and media to discuss globally-relevant issues from today until June 12. A wide spectrum of groups have announced protests to be held nearby. Critics charge the secretive nature of the Bilderberg Group annual meetings is undemocratic.

This guys looks out of place. He looks like an extra from that 1995 movie with Angela Jolie aboout “hackers” ? His name is Alexander Karp and he is an American billionaire businessman, co-founder and CEO of the software firm Palantir Technologies.

now *this* is how to arrive at #Bilderberg: Alex Karp, CEO of #Palantir / director of the #Economist Group. pic.twitter.com/g0tdo3IQXQ

We caught the arrival of so called “libertarian” Peter Thiel the co-founder of PayPal with Max Levchin and Elon Musk and served as its CEO. He also co-founded Palantir with Alex Karp (above), where he is now its chairman. 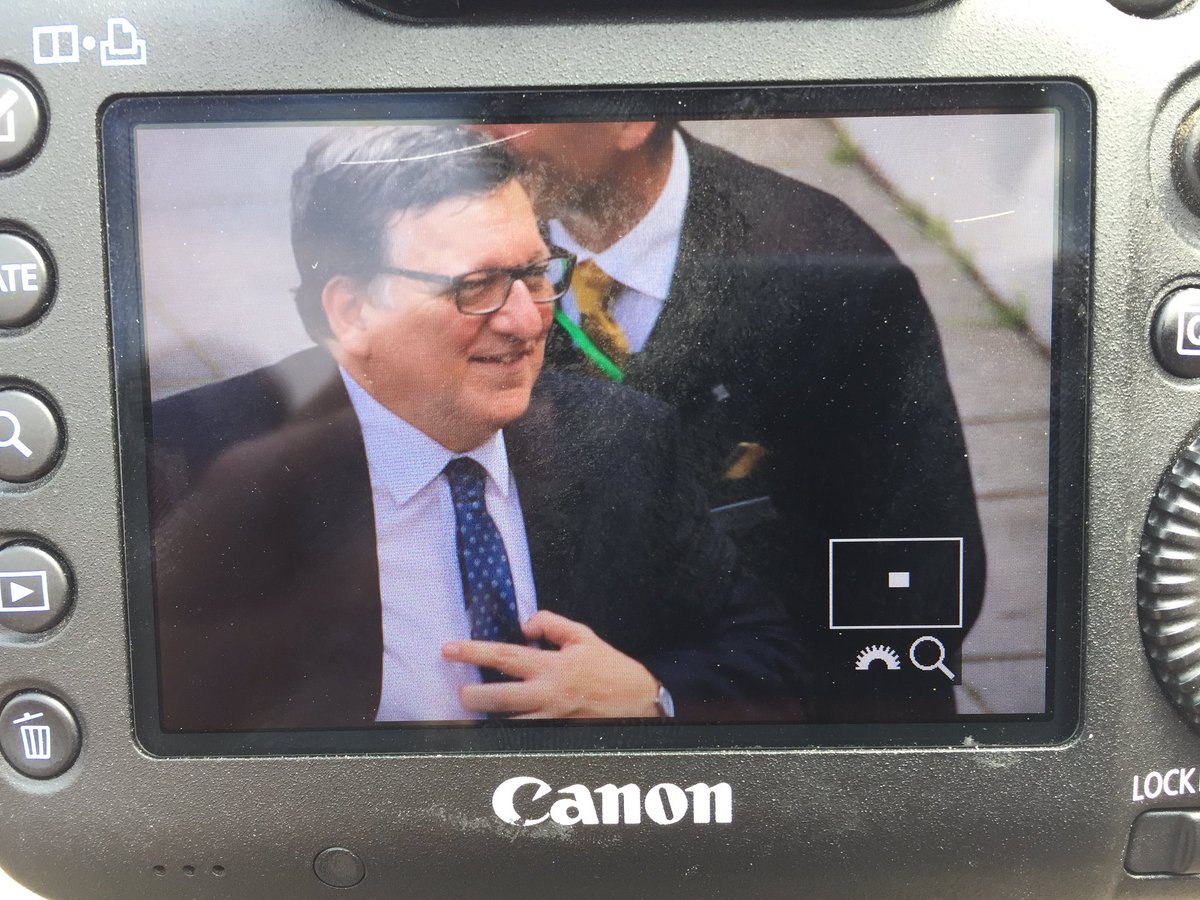 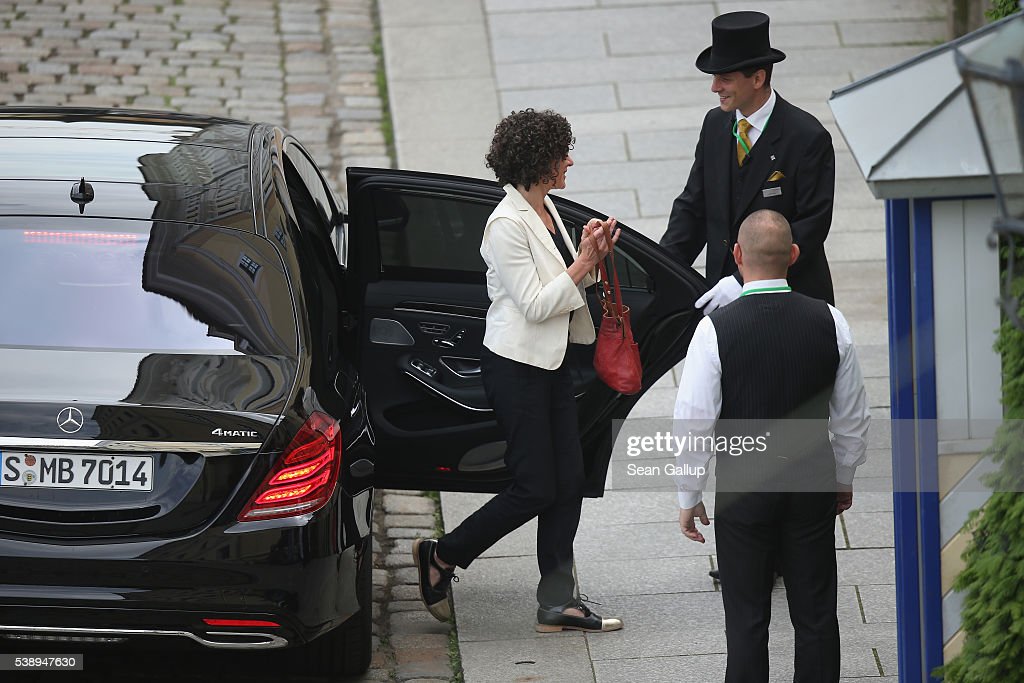 Yasmine Kherbache, MP of the Flemish Paliament, arrives at the Hotel Taschenbergpalais Kempinski Dresden Made Possible by Getty images ?

The Bilderberg Group Attendees Not yet Photographed

He also happens to be a long-serving Goldman Sachs board member who has been called “Washington DC’s Medici” – a reference to Italy’s Medici family, the so-called “Godfathers of the Renaissance” who produced three popes, prospered in banking and sponsored the arts.

In 2008 it was reported that Mr Johnson was vetting Barack Obama’s potential vice-presidential candidates, as he had chosen running mates for Walter Mondale in 1984, and John Kerry in 2004.

As well as setting up a commercial strategy consultancy with former US Assistant Secretary of State Richard Holbrooke, Mr Johnson, 72, served as chairman and chief executive to the Federal National Mortgage Association (Fannie Mae) between 1991 and 1998.

His salary was reported to have been $21 million (£14.5 million) by the time he left Fannie Mae – ten years before, at the height of the global economic crisis of 2008, it had to be taken over by the US government.

Atlantic Magazine once described Mr Johnson as “famously reluctant to talk to the Press, which is one reason why he has become a trusted advisor to so many politicians.”

As the CEO of the Deutsche Börse, Mr Kengeter will become a leading figure in one of the most important financial institutions in the world when the merger between the Börse and the London Stock Exchange is completed at the end of this year or in early 2017.

With the London Stock Exchange Group already owning the Milan-based Borsa Italia, the planned merger – announced in February – will create one of the world’s largest exchange companies with a combined value thought to be in the region of £21 billion.

Deutsche Börse shareholders will own 54.4 per cent of the new holding company UK TopCo.   Reporting on the merger, The Financial Times described it as evidence of “an ambitious expansion strategy” devised by Mr Kengeter, a 49-year-old the newspaper described as “a starkly ambitious former Goldman Sachs banker who pursues extreme skiing in his spare time.”

Listed on the Bilderberg website as “Chairman, KKR Global Institute”, Mr Petraeus is also a former director of the CIA.

Appointed by Geroge W Bush as the general commanding the multinational force in Iraq in 2007, he orchestrated what became known as ‘the surge’, bringing in 30,000 more troops to the country in a move which appeared to quell the insurgency there.

An expert in counter-insurgency, he was made director of the CIA by Barack Obama in 2011.  He resigned, however, in November 2012 after it was reported that he had had an affair with his biographer Paula Broadwell.

Update: Watch this Most Recent Video With Luke Rudkowski and Charlie Skelton