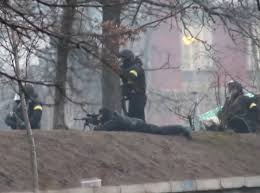 Details of a leaked phone call between EU foreign affairs chief Catherine Ashton and Estonian foreign affairs minister Urmas Paet suggest that the US-backed opposition was responsible for hiring snipers who gunned down protesters in Kiev and not the deposed government of Viktor Yanukovich, as the media widely claimed.https://www.youtube.com/watch?v=ZEgJ0oo3OA8

During the phone call, Paet tells Ashton that evidence presented to him by a doctor who treated victims of the sniper attacks clearly indicates both police and protesters were being shot at by the same people.

“There is now stronger and stronger understanding that behind the snipers, it was not Yanukovich, but it was somebody from the new coalition,” said Paet during the phone call, which was hacked by the Security Service of Ukraine (SBU).

“And second, what was quite disturbing, this same Olga [Bogomolets] told as well that all the evidence shows that the people who were killed by snipers from both sides, among policemen and then people from the streets, that they were the same snipers killing people from both sides,” the Estonian FM added.

The true narrative therefore suggests that forces within the opposition hired the snipers in order to kill protesters and then blame the deaths on Yanukovich’s administration, thereby delegitimizing his bid to hold onto power. This is a classic example of the kind “false flag” attack that NATO, which has vehemently sided with the opposition, perfected in Europe throughout the 60?s, 70?s and 80?s under Operation Gladio.

“I think we do want to investigate. I mean, I didn’t pick that up, that’s interesting. Gosh,” Ashton said in response to Paet.

However, the only real “investigation” conducted into the sniper killings was overseen by a secretive British team who refused to tell the BBC who they were working for. The investigators suggested that they had already concluded the Yanukovich government was responsible for the “bloodbath” before any formal results were even published.

Paet indicated that the newly installed government had since launched a cover-up of the sniper attacks, remarking, “They don’t want to investigate what exactly happened.”

The phone call was conducted after Paet visited Kiev on February 25 at the height of the clashes between police and protesters.

Suspicion as to who was really behind the sniper attacks should be focused on armed right-wing extremists who are now patrolling Kiev after the overthrow of Yanukovich. As we previously highlighted, after both Nuland and John McCain met with the leader of the neo-nazi affiliated Svoboda Party, the organization was handed three top positions within the newly formed Ukrainian government despite its clear links to fascism and anti-Semitism.