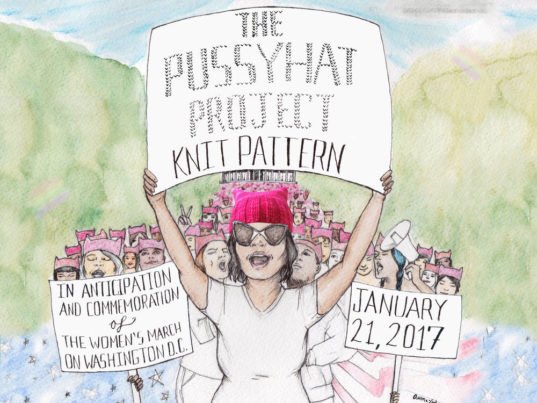 Thousands of women are angrily knitting “pussy hats” to wear to the Women’s March on Washington in protest of the inauguration of Donald Trump.

Making a #pussyhat for the Womens March? We have LOTS of pink yarns + new shipment from @KnittedWit dyed specially for this effort! pic.twitter.com/4CPIsBqI38

“At first glance, the Pussyhat Project is about making a powerful visual statement at the Women’s March on Washington, D.C.  It’s about the hats, and also a lot more,” the Pussyhat website reads. “At its core, this project is about creating a form of representation for those who cannot be there, developing connections between people who care about women’s rights, and creating a framework for community and personal agency from the local to the national level.”

On my third #pussyhat for the @PussyhatProject I'll be bringing them to the #WomensMarch myself. pic.twitter.com/wgGpIEO2qq

The Pussyhat Project was launched by Krista Suh and Jayna Zweiman of Southern California, and has now apparently become “a thing.” The hats are knit with pink yarn and are meant to be shaped like cat ears — though they could also be mistaken for devil horns.

“If everyone at the march wears a pink hat, the crowd will be a sea of pink, showing that we stand together, united,” the website continues. “Pink is considered a very female color representing caring, compassion, and love – all qualities that have been derided as weak but are actually STRONG. Wearing pink together is a powerful statement that we are unapologetically feminine and we unapologetically stand for women’s rights.”

The protesters have even began placing them on statues, perhaps they had trouble finding enough people willing to wear them.

A #pussyhat for everyone. pic.twitter.com/bRcgt2dFQI

On January 21, the day after Trump is sworn into office, thousands of women are expected to march on the White House in protest of their chosen candidate losing the free and fair election.

“Everything else about the Women’s March, however, is reaching a level of absurdity worthy of the man they are protesting. Start with the fact that they are billing this event as the voice of women when 42 percent of women (and 62 percent of non-college educated white women) actually voted for Trump,” Shikha Dalmia noted in an excellent takedown of the protest for the Week.