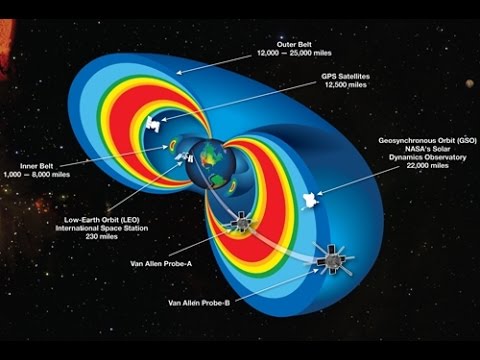 [This report was put together by the YouTube channel owner, Dutchinse]

It appears that NASA actually DRAINED one of the protective Van Allen Radiation belts surrounding Earth.

This experiment was done, and was successful. No doubt, this could easily cause “climate change” , since the Van Allen Belts protect us from solar radiation , high electron voltage.
During the experiment, after deploying the tether in space, they say the tether “broke” and floated away into Earth’s orbit.

They were never able to retrieve the floating tether, which worked exactly as expected, and became a glowing bright object in space for several weeks (3 months).

They do not say whether the Tether fell back to Earth, however the height of the experiment leans towards the fact that the tether is still up in space , along with the satellite carrying it.

The projected timeframe for REMOVING the inner van allen belt was 2 months time. This all occurred in 1996, and for sure was up THREE months…. thus we can begin to see that the same time we started seeing major “climate change” is the same time they removed one of the Van Allen belts.

If you remove a protective layer of the upper ionosphere , which shields us from the Sun, then you should expect the Sun to have a greater impact on the Earth below once the shield is gone.

That is exactly what happened. Global spikes in Temperatures, Earthquakes, and Volcanic eruptions began in earnest after the year 1996.

Now we know the culprit.

Here is Montagraph’s video raising the original question on the Van Allen Belts:

“High Voltage Orbiting Long Tether, or HiVOLT, is a concept proposed by Russian physicist V.V. Danilov and further refined by Robert P. Hoyt and Robert L. Forward for draining and removing the radiation fields of the Van Allen radiation belts that surround the Earth. A proposed configuration consists of a system of five 100 km long conducting tethers deployed from satellites, and charged to a large voltage. This would cause charged particles that encounter the tethers to have their pitch angle changed, thus over time dissolving the inner belts. Hoyt and Forward’s company, Tethers Unlimited, performed a preliminary analysis simulation, and produced a chart depicting a theoretical radiation flux reduction, to less than 1% of current levels within two months for the inner belts that threaten LEO objects.”

“The space tether experiment, a joint venture of the US and Italy, called for a scientific payload–a large, spherical satellite–to be deployed from the US space shuttle at the end of a conducting cable (tether) 20 km (12.5 miles) long. The idea was to let the shuttle drag the tether across the Earth’s magnetic field, producing one part of a dynamo circuit. The return current, from the shuttle to the payload, would flow in the Earth’s ionosphere, which also conducted electricity, even though not as well as the wire.”

By all the charts, and all the data from the “global warming / climate change” scientists… 1996 was a pivotal year for man made climate change. Deniers of climate change say the WARMING STOPPED in 1996 of all years.