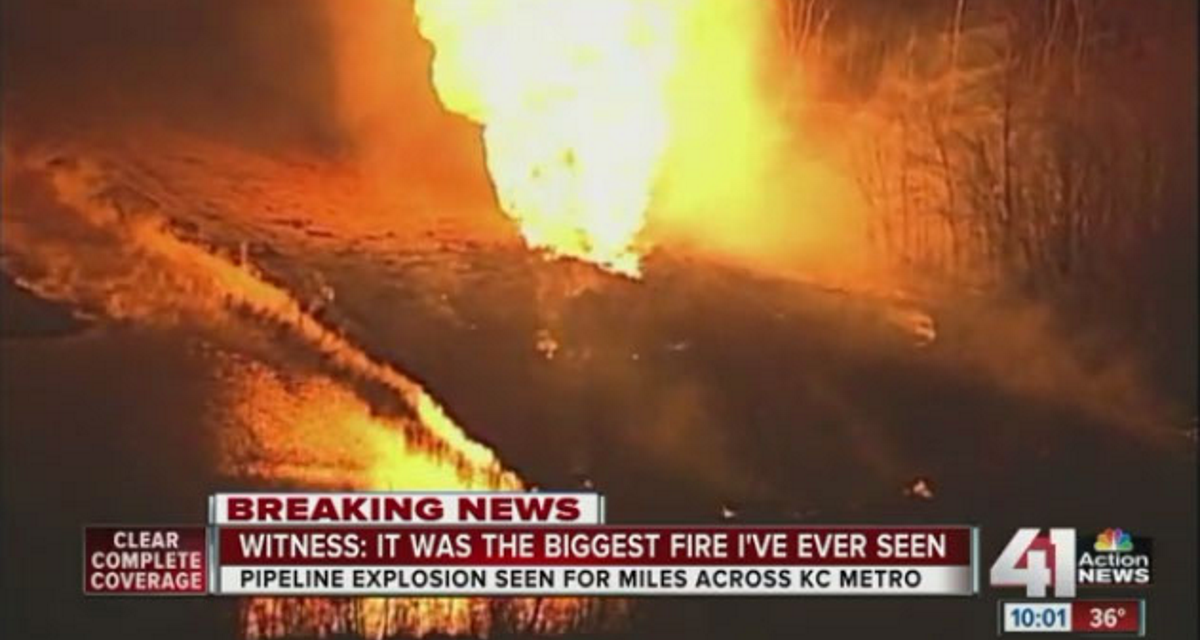 A gas pipeline with liquid propane ruptured, causing the massive fire, it happened just north of Kansas City International Airport on Tuesday night, the pipe broke open exploded  causing a large plume of flames which could be seen up to 15 miles away.

Flames rip from the earth’s surface, spewing 40+ feet into the nights sky. Residents look on in awe as yet another fossil fuel pipeline has exploded. An all to common scene throughout rural America these days.

By 7:30 p.m., aerial footage from KCTV appeared to show the flames dying down.

The identity of the owner or operator of the pipeline was not immediately available. But we now know The Pipeline is owned by Louisiana based Enterprise Gas Products, a partner shell company of Mid-America Pipeline Co LLC.

KCI news  spokesman Joe McBride tweeted flights in and out of KCI are not being affected by the situation at this time. He said the fire was not on airport property.

Local authorities and a gas company representative will assess damage Wednesday and investigate the cause of the pipeline rupture that caused a fiery explosion north of the Airport.

The pipeline rupture was declared under control without injuries about 10 p.m. Tuesday, as crews worked to secure the area of the explosion.

“It just looked like the sun was coming out … it was that bright from where we were at,” neighbor Kameo Patch said.

Shanks said the fire was in a remote location on the edge of the county about three to four miles in a field west of Smithville.

“The advantage of the location is obviously there a limited number of structures. It’s out in a field and there’s limited amount of damage,” Shanks said. “The bad news is there is also limited access for fire crews.” 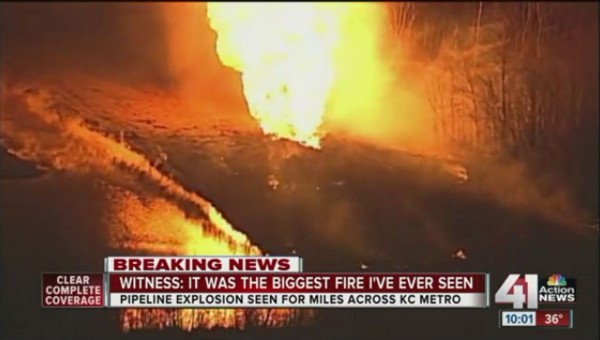 This corporation, Mid American Pipelines, is no different from the rest. They have your typical track record of spills and breaks along their pipeline system. They have already have over a million in fines placed against them. Here is just a few of the spills into waterways this corporation is responsible for. Including a spill into the Missouri River, the same river Water Protectors and anti resource extraction activist from around the globe gather to defend from the DAPL pipeline.

I am from an area effected by more than one of these oil spills, in fact one from each of these companies. Yet I still see Shell stations popping up everywhere. It seems Shell and Marathon, one of the companies behind the DAPL  are some of the most popular filing stations in my area. I am proud to say in some spots we have managed to outright shut s few BP stations down from boycotts how ever there are still plenty to be found, and people continue to throw there money into them. Some of the very same people who you hear scream FUCK BP are going to fill their tank at the BP their on the way home. We as both the working class and the consumers have the ultimate power.

Everywhere Indigenous peoples are coming together and rising up, joined by anti fossil fuel activist of all types. We are witnessing a Resistance to resource action like has never before been seen. With the huge Resistance in Standing Rock against the DAPL pipeline receiving the unprecedented amount attention it seems we are reaching a tipping point on this issue. We are sure to see The Resistance continue to get stronger all around the world. The time of fossil fuels are coming to an end. So to answer the great question of our time, when is enough, enough? Well, RIGHT NOW. This is our time to rise up and put an end to this primitive 150 year old technology