How Many Of You Know People Who Think That Being A Socialist Is Just About Being Nice? 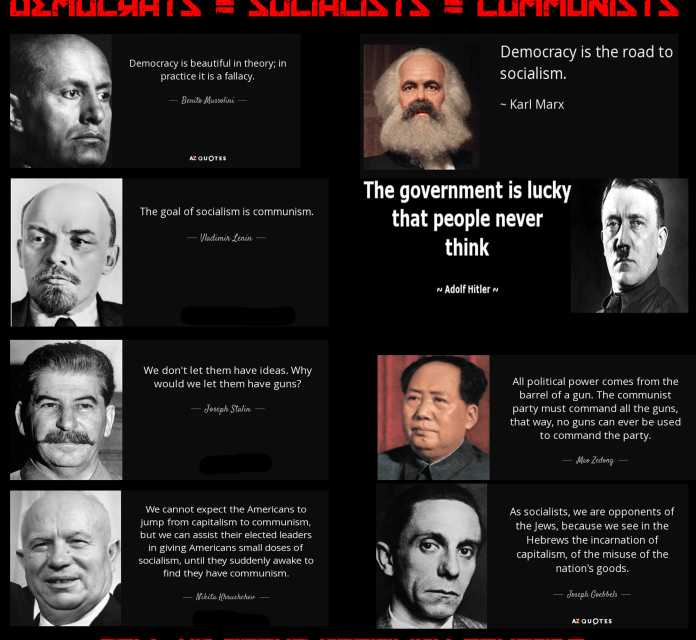 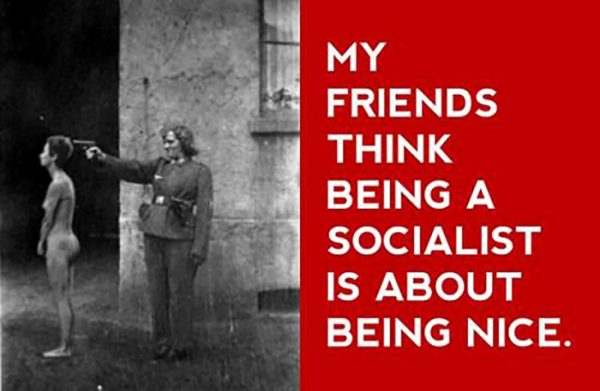 Do you have a friend who claims to be a socialist? In the 20th century there have been numerous political systems, but in the latter half of the century there were only two survivors, Socialism and Capitalism. So we have at this time in the Western world, which for all practical purposes controls the world, two opposing political systems. (I have already previously stated that there is no basic difference between socialists and communists. There are, however, some very important factors relating to socialism of which you should be aware. Socialism will not work in a free market economy and, as a consequence it invariably deteriorates into a totalitarian state. Anyone wishing to argue that point is asked to point to one single instance where this was not the result).

It therefore behooves us to remember who the worst despotic governments of this century were: Nazis in Germany, Fascists in Italy, Communists in the USSR, [Romania, East Germany, Bulgaria, Hungary, Yugoslavia, Czechoslovakia, Poland, Cuba, North Korea, Cambodia, Vietnam, etc.] and China – each and every one of them a paragon of socialist endeavor. Their leaders; Hitler, Mussolini, Stalin [Ceausescu, Tito, Pol Pot, etc.] and Mao Tse Tung. The outstanding legacy of these individuals is that they each tried to out-do the others in the total number of their own citizens which they murdered. It is a fact that each of these men killed more of their own civilian citizens than they lost in military conflict. 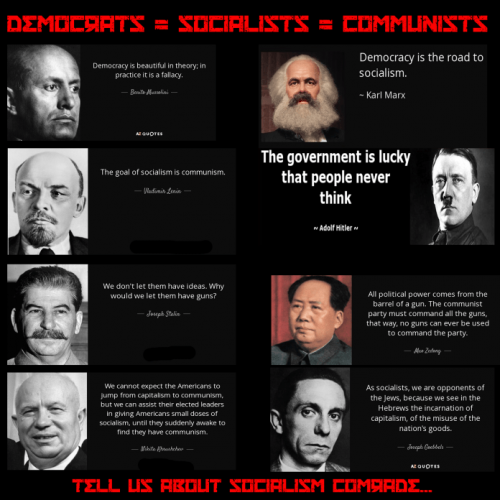 The reason for this is inherent to socialism. It promises things that it cannot possibly deliver. When socialist politicians in power come to the realization that it is impossible to deliver on their promises and political unrest develops, they have two options if they plan to stay in power. First, they must locate a scapegoat on whom they can blame their inability to deliver. Any Jew can tell you who that was for the Germans and the Russians. The second is to develop, and rapidly so, a state security apparatus to keep them in office – the SS, the KGB, [Securitate, Stasi] etc.

The basic tenets of socialism are:
1. Seduce the populace into accepting the government as the arbitrator of all problems; government from cradle-to-grave
2. Begin delivering on those services to make the citizens dependent
3. Take away the citizens’ guns
4. Increase taxes on all services while destroying any free market alternative services
5. Blame the chosen scapegoat for the inability to meet demand for services
6. Have the centralized national police force round up any dissidents

Socialism cannot work because the cost of services must be collected in the form of taxes, and this is not a sustainable possibility. The reason is that since government pays for all services, neither the producer nor the consumer cares about the cost, and hence there is an uncontrolled spiral of inflation (today’s medical costs are a case in point and healthcare is not yet totally socialized). Furthermore, the government has no funds or assets. It only has the funds it confiscated from its citizens. The total inefficiency of a centralized bureaucracy does not help either.
Once citizens are weaned on this cradle-to-grave concept and are no longer self-reliant, they become wards of the state and will not accept any reduction of services. The government subsequently has no option but to reduce services, and as popular resistance develops State repression begins. This is the socialist cycle. It has been found to occur in every socialist state in existence to date.

The current most outrageous examples of this are North Korea and Cuba. These two societies share much in common – both are socialist, both are totalitarian, both have more political prisoners then any nation close to their size, both have non-working universal health care, in both the citizens suffer malnutrition, and both have food and fuel rationing. Their leaders and party members, in the meantime, eat caviar and drink champagne.

Socialism can never work in any environment. It violates human nature and logic.

The capitalist economic system differs greatly from its socialist adversary in numerous ways. While the socialist system is a top down centralized arrangement, the capitalist system, which can only exist in a free market economy that recognizes the right of private property, is totally controlled by the market itself. Interestingly, personal freedom, liberty, and the pursuit of happiness can also only thrive in free market economies. Capitalism is a sort of volatile and confusing situation where the capital markets dictate demand, price, and methods of distribution. The reason that the left is so very successful in criticizing capitalism is because it is not regulated and therefore difficult to explain. The reason capitalism works so well is that demand dictates production as well as price, thus avoiding market inequities and shortages.

Socialism’s principal theorem is centralization of markets under government control. This has never worked and there is not one single instance in world history where centralized governmental market manipulation has been successful. This, however, does not deter the Robert Reichs (America’s socialist Secretary of Labor who said, “Greedy corporations are screwing their employees, squeezing down wages while increasing profits.” This statement, from an economic illiterate who has never in his entire life worked for, or in, a business that made a profit. He appears to me to be a little man with a Napoleon complex, who, while having no clue about anything to do with economics, presents himself as a great expert. Corporate downsizing, mergers, and staff reductions has a great deal to do with international trade policies, NAFTA, EC, WTO, etc. and very little to do with greed.) of this world, who continuously make every effort to centralize economic as well as social and political power for themselves and their Satori masters (the ruling elite).

George Washington said it best: “Government, like fire, is a good servant, but a fearful master.” All capitalist functions are directed at free market concepts. A free market is one that serves society with little government interference. This concept is unpopular with the Satori because in order to attain more and more power they require centralization of all economic, social, and political functions. Because of their poor performance in the political frame they have altered their modus operandi and are now implementing their schemes through judicial activism. These judicial incursions, which by the way, in the United States are in violation of constitutional law, have been sold to the public based on the false misnomer that greedy capitalists don’t care about the people, their welfare, safety, or health, but that politicians do.

This, without doubt, is a ludicrous statement. The capitalist must perform to market standards. Competition will put him out of business if he provides an inferior product or service. He is furthermore constrained by his customers, stockholders, board of directors, lending institutions, as well as numerous laws, and, if all else fails, product liability statutes. In addition there is a veritable alphabet soup of governmental agencies which oversee his product, conduct with employees, public safety, product safety, environmental compliance, and financial performance.

In fact capitalists are over-regulated, which causes a considerable burden to be put on the public in the form of increased prices. A noteworthy fact is: the most egregious acts against the consumer, the environment, and the public in general, have all been made by socialist states.