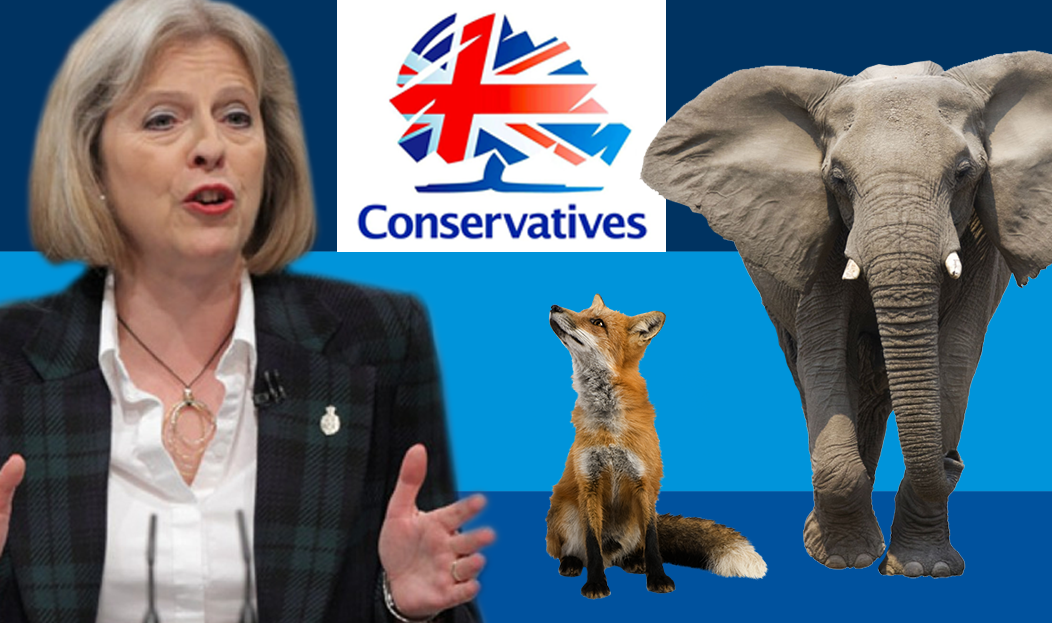 Theresa May, Prime Minister of the United Kingdom, has said that a Conservative government would set an “absolute limit” on the amount that people pay for social care, dubbed the “Dementia Tax”, in a U-turn on plans included in her party’s election manifesto last week.

U-turn coming on social care. There will be a cap. Read today's @EveningStandard for the details

May is coming under pressure to drop or water down her controversial shakeup of social care that has been branded a “dementia tax”, amid warnings that it is unfair and could deter older people from seeking care. Over the weekend the polls showed the gulf between the two parties, Conservatives and Labour, narrowing to nine points.

The Lib Dem leader, Tim Farron, called it a “manifesto meltdown” but said it changed nothing. “As Theresa May has made clear herself, nothing has changed and her heartless dementia tax remains in place. He went on to say, “This is a cold and calculated attempt to pull the wool over people’s eyes.”

The prime minister has faced a backlash about the proposal to make elderly people pay for care in their own home unless they have less than £100,000 in assets, as it would force them to use up the value of their residential property for the first time.

During a speech in Wrexham to launch the Welsh Tory manifesto, May said:

“So I want to make a further point clear. This manifesto says that we will come forward with a consultation paper, a government green paper. And that consultation will include an absolute limit on the amount people have to pay for their care costs.”

However, the prime minister refused to be drawn on the level of the new cap. May denied that there had been a change of direction and said she was simply clarifying the points in the manifesto, however, details of a cap were not contained in the manifesto.

Sky’s Economic Editor, Ed Conway said: “It’s pretty clear, when you look at the manifesto, this was not there. It looks to have been ruled out, if not explicitly, then very much implicitly and lo and behold, it suddenly changed and a cap has been added in the last few hours, it seems.”

What is the “dementia tax”

“Presently, recipients of residential care have to part fund the service they receive if they have assets in excess of £23,250. If they are applying for a place in a home, they have to include the value of their house in the means test. As around two thirds of pensioners are home owners, this often means selling the house from under them to pay for their care package – though an option exists to defer costs. To demonstrate, assume a 75 year old pensioner requiring residential care has £25k in savings and their house is worth £89k. Leaving aside income and assuming that person then lives for a further six years (in line with current life expectancy), according to care costs calculators for Staffordshire (because that’s where I live) you’re talking upwards of £190k. Note this will vary from county-to-county and by local authority area. Therefore, our pensioner would presently be required “contribute” almost £91,000. The remaining £23k of their assets will remain theirs. If on the other hand our pensioner requires domiciliary (at home) care, the application in this case would take into account their savings only. This care is cheaper, costing between 70-75% of being in a home and their contribution would be just £1,750 (again, leaving aside income from their pension(s)).

What they giveth in one hand they taketh with the other. Under the proposals in their manifesto, our imaginary pensioner above wouldn’t have to pay anywhere near as much as the Conservatives promise to raise the capital floor to £100,000. Their contribution would shrink to just £14,000. Sounds alright, doesn’t it? But here’s the catch. The Conservatives want to redefine the asset base so the house is counted for residential and domiciliary care. Another change is they will only come for the assets after the person in receipt of care has died. On the surface then, pensioners who are poorer or moderately okay like the example given would benefit. But older people whose combined assets are in excess of £100,000 are going to get clobbered. Or, rather, their families and children are. The problem for the Tories is this is their vote base, and there are millions of pensioners in this position. All of a sudden, estates of people in receipt of domiciliary care are going to receive steep bills after their loved one has died.

This sets up all kinds of problems and difficulties. For pensioners living as couples, how does this recoup costs from shared assets like a home? If their house is £250,000, would the estate be expected to pay £150,000 or £25,000? And in either case, would the surviving partner be expected to liquidate their shared asset to pay the bill? Likewise, for live-in carers who might be sons, daughters or whatever, can we safely assume that they will be expected to sell up their inheritance to pay the balance off? And what will they do about the scramble of elderly people transferring ownership of assets to relatives before they put in a care application and therefore avoid the charges? Unfortunately, none of this is clarified in their manifesto. Unlike Labour who provided costings for their pledges, the Tories chose not to.”

There has been a backlash from members of the public who fear receiving demanding letters from the council asking them to hand over tens, and in some cases, hundreds of thousands of pounds, all while grieving for their relatives. One of the criticisms is that no one can really do anything to avoid the tax since old age brings health complications and an unlucky number of people will develop dementia.

Even some of May’s own Tory ministers and newspapers who would normally be supportive, are not going to defend her proposal.

May argued that the policy was necessary to create a “sustainable future for social care”, saying there would be 2 million more people over 75 coming into the system over the next decade.

The negative reaction to the “dementia tax” is spreading over the internet and social media and is the top trending Twitter topic in the UK today. 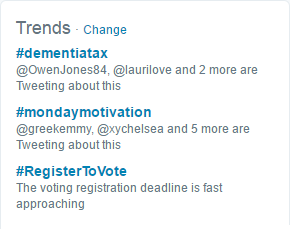 The Conservatives are obviously worried and have gone into damage control mode, even paying for an add to appear as the top result on Google.co.uk today.

The public have been baffled as to why May has included such controversial and unpopular proposals in her manifesto.

May has surely produced the most bizarre and ill judged Tory manifesto ever. Attacking pensioners, children, elephants & foxes. Why?

A much more likely reason (for the Tories dropping the ivory ban) is that they are being swayed by the powerful antiques industry, which fears it will lose millions of pounds if antique ivory sales are stopped, and whose figurehead happens to be Victoria Borwick, Conservative MP for Kensington, and president of the British Antique Dealers’ Association.”

Sorry for the distressing image, but we have to let people know what voting Tory means. pic.twitter.com/xOsUeQdXC6

The most powerful UK antique traders association is The British Antiques Dealers’ Association, and their President, Lady Victoria Borwick (also the Conservative MP for Kensington) can be seen shaking hands with Theresa May in the image above.

Yet another unpopular proposal is a free vote to repeal the Hunting Act.

In 2015, moral people defeated the attempt by the then Conservative Government to bring back #foxhunting. We will do so again this year. pic.twitter.com/JgABi5iVPq

Last week, Theresa May said that “there is a need to keep fox numbers down” and that hunting was “less cruel than other methods”. CEO of League Against Cruel Sports, Eduardo Goncalves, had the following to say in response:

“Contrary to what the Prime Minister mistakenly said, anyone who feels the need to kill foxes should never use hunting with dogs, as it is in fact one of the cruellest methods available. This is due to the long chases of the target animal involved. There is enough evidence to suggest that hunted animals suffer whilst being chased by dogs regardless of how they are then eventually killed.

“There are two key points to this argument. Firstly, there is no need to control wildlife populations including that of foxes because their populations self regulate. Claims that fox populations are increasing out of control are completely false. Secondly, hunting has absolutely nothing to do with wildlife control, it is about a blood sport, plain and simple – killing for fun.

“The vast majority of the public want to keep hunting for sport illegal, and it is only a very small minority of influential figures who want to satisfy their blood lust once again and make ripping apart animals for sport legal. What we want is a future free from cruelty.”

The public are wondering if the Tories are trying to sabotage their chances at winning the general election. 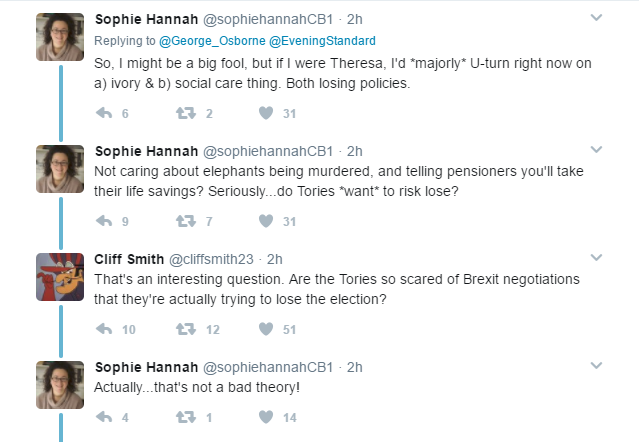