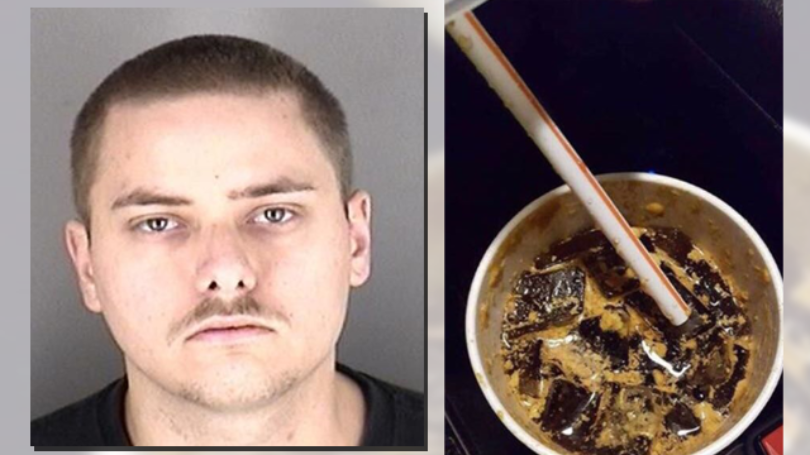 A McDonald’s employee in Topeka, Kansas, has been charged with two counts of battery on a law enforcement officer after putting mustard in their drinks.

Last weekend, an image of a Topeka Police Officer’s Dr. Pepper went viral after it was posted to the Facebook page “Kansas GOING BLUE” as an “officer safety alert.” The post stated, “a McDonald’s here in Kansas just served a Law Enforcement Officer on duty a Dr. Pepper with Mustard in a drive thru order. This is extremely unacceptable!!”

It turned out that he wasn’t the first law enforcement officer to receive an unwanted condiment in his drink, a Kansas Highway Patrol Trooper had the same service two weeks ago.

As the incident went viral, Jonathan Gill, 26, was fired from the fast food giant.

“All customers, including local law enforcement officers who protect and serve our communities, are always welcome at our restaurants,” Tom and Marilyn Dobski, McDonald’s franchisees in Topeka said in a statement. “Immediately upon learning of this complaint, we began our own internal investigation to gather the facts. We are shocked by the isolated actions of a single employee.  This employee no longer works for our organization. We proudly support police officers and all divisions of first responders at our restaurants across northeast Kansas.”

The punishment didn’t just stop with him losing his job, however.

On Friday, Gill was arrested and charged with two counts of battery on a law enforcement officer.

A local attorney, Charley O’Hara, told Eyewitness News that it is possible that Gill could also be charged with a food and drug violation.

“When you go into any establishment, you’re supposed to get what you ordered. You’re not supposed to have it tampered with and do other things to you And I think that’s a crime if someone intentionally does that,” O’Hara stated.

According to O’Hara, Gill could face up to 12 months in jail and a $2,500 fine if convicted of a Class A misdemeanor.

While O’Hara’s employment termination is unarguably warranted, many online have asserted that they believe the charges to be extreme, possibly even hypocritical.

“If a citizen went to a police department or called 9-1-1 to report mustard in their drink they would most likely be met with laughter or ridicule. They might even be charged with abuse of  an emergency hotline,” Matt Agorist noted at The Free Thought Project.