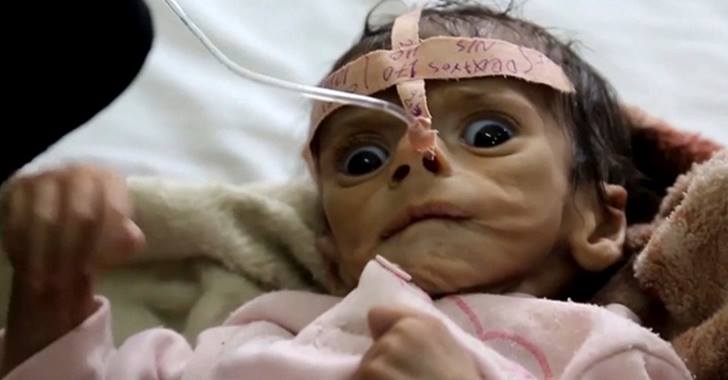 Saudi Arabia has devastated Yemen with bombing raids, throwing the already-poor nation into a state of famine. The United States has said next to nothing about the Gulf kingdom’s ongoing assault on Yemen, nor has it commented on Saudi Arabia’s penchant for other human rights abuses.

Saudi Arabia, a kingdom that’s been allied with the United States since 1933, has been directly involved in bringing about one of the most horrifying famines in history in the country of Yemen. But this may be news to you if you’ve only been watching mainstream coverage of the situation – and there hasn’t been much of that coverage in the first place.

After years of bombing campaigns by Saudi Arabia with support from other Gulf states and the U.S., nearly half a million Yemeni children are months away from famine. The situation is compounded by the fact that over 50 percent of the population is living below the poverty line.

The U.S.-Saudi alliance, which has devastated the region in nearly unimaginable ways, has been partly strengthened by the U.S.’ devotion to preserving the political supremacy of Gulf states – more specifically, their military strength.

According to the U.S. State Department’s Bureau of Eastern Affairs, “Saudi Arabia is […] a strong partner in regional security and counter-terrorism efforts, providing military, diplomatic, and financial cooperation. It works closely with U.S. law enforcement to safeguard both countries’ national security interests.”

The U.S. has provided Saudi Arabia with economic and military assistance since full diplomatic relations were established in 1940. In February 1943, President Franklin D. Roosevelt made Saudi Arabia eligible for lend-lease assistance, describing the kingdom as “vital.”

The lend-lease policy between the US and Saudi Arabia meant that FDR was permitted “to transfer arms or any other defense materials for which Congress appropriated money to “the government of any country whose defense the President deems vital to the defense of the United States.”

Two years later, Roosevelt would visit Ibn Saud, the first monarch and founder of Saudi Arabia, and publicly affirm U.S. commitment to the country and its monarchy. The reason for this tremendous display of solidarity? Oil.

According to a draft memorandum released in 1945, oil reserves in Saudi Arabia “constitute a stupendous source of strategic power, and [are] one of the greatest material prizes in world history…” The memo goes on to say that “it will undoubtedly be lost to the United States unless this Government is able to demonstrate in a practical way its recognition of this concession as of national interest by acceding to the reasonable requests of King Ibn Saud that he be assisted temporarily in his economic and financial difficulties until the exploitation of the concession, on a practical commercial basis, begins to bring substantial royalties to Saudi Arabia.”

A U.S. military presence in the Gulf was firmly established by way of such royalties, and as U.S. administrations have come and gone, the country’s relationship with Saudi Arabia has never wavered.

The Saudi Kingdom, with its oil-based cash flow, has since become one of the most influential Gulf states in Washington, and the U.S. has remained just as steadfast in its commitment to the kingdom. Even as Saudi bombs have fallen on hospitals, schools and densely populated civilian areas in Yemen, the U.S. has refused to reprimand Saudi Arabia.

After the Obama administration publicly authorized the military bombardment of Yemen, describing it as a “military action to defend Saudi Arabia’s border and to protect Yemen’s legitimate government…,” his administration awarded Saudi Arabia with artillery and even went as far as to refuel Saudi jets that have taken part in deadly bombing campaigns.

Saudi Arabia hasn’t kept itself solely occupied with military campaigns. The state has also devoted itself to spreading violent sectarian mythology, executing men and women for “witchcraft” and “sorcery”, implementing deeply restrictive patriarchal policies and sending mercenaries to quell the uprising in Bahrain. At the same time, Saudi Arabia has inaugurated a ‘girl’s council’ absolutely devoid of women and continued to enjoy a leading membership role in the United Nations Human Rights Council.

Despite this, the Obama administration has continued to provide the kingdom with record-setting weapons deals, with little to nothing said regarding the country’s unabashed abuses of human rights.

Yemen has continued to suffer from the U.S. relationship with Saudi Arabia, and as starvation, scarcity of water and a lack of medical supplies claim more lives, Saudi Arabia’s oil-drenched ambitions are going entirely unchallenged by yet another U.S. administration that is thoroughly invested in maintaining a stranglehold on the region with the help from Gulf monarchs.

This article first appeared on MintPressNews.com and was authored by Roqayah Chamseddine.