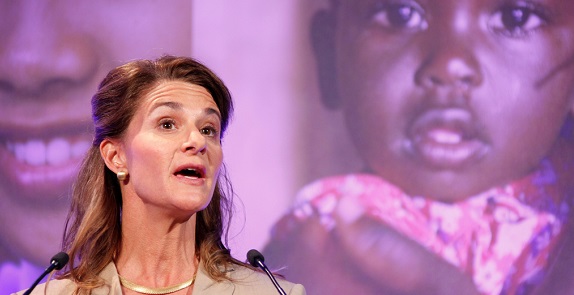 Melinda Gates of the Bill and Melinda Gates Foundation is furthering her agenda to control the population. This time is by launching her “Family Planning Programme. The technology is called Uniiject, it comes in a simple, unintimidating squeeze bottle. It is said to cost one dollar. The injection is simple and built to encourage more women in West African nations to either delay pregnancy or halt it forever. Because the injection doesn’t require the women to lift up their dresses, turnout is expected to be high.

According to Science Alert, 6,000 women have already been subjected to the anti-fertility injections.

The results have so far been very positive in Burkina Faso, with Gates Foundation-funded site, Take Part, reporting that nearly 6,000 women have used the contraceptive, and for almost a quarter of them, it’s the first contraceptive they’ve ever taken.
Melinda Gates now plans to roll out the anti-fertility contraception to millions of women, according to the Hindustan Times.
“I’m encouraged that the government of India is finally, really coming back to family planning. They have re-energised it, they are saying they understand it needs to be voluntary and they are starting to offer a basket of choices and options to women,” said Melinda , co-chair of the Bill and Melinda Gates Foundation, who arrived in New Delhi on a three-day visit on Friday.

“Because sterilisation is the only method available to so many women, they have their children very, very close together, so they have them young which is extremely dangerous for the mom and for the baby,” she said.

“So India took this decision last year to introduce injectables into the public sector, which is huge. I see it happening this year. They (Indian government) have been talking about it for several years but hadn’t taken the policy decision. They finally took the policy decision, so I think they will start to roll them out this year as part of the government system, They’re (injectable contraceptives) have been in the private sector,” she said.
This is glorified population control on the part of the Gates Foundation. It can’t be interpreted in any other way. Melinda is just off her 7th visit to India which is when she dropped the news about population control meds being issued to young girls country-wide. She’s calling it the “Family Planning Programme” but in the end, it is just an injection that sterilises girls. Many of the girls are from low-education areas and probably don’t understand the gravity of Melinda’s “Family Planning Programme.”

This is nothing short of a nefarious attempt to control the population. We’ve long speculated that the Bill and Melinda Gate’s Foundation has used vaccines to secretly sterilize young mother in Africa and India, now that concept has been lent more authenticity.