Memory Hole: How The MSM Lies Even When Telling The Truth 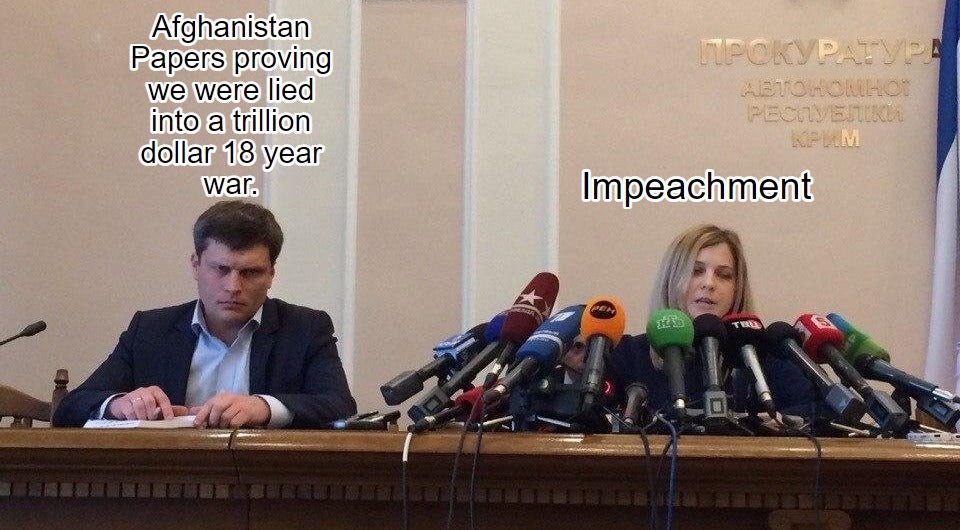 “This goofy ass Trump letter is gonna get more outraged coverage than the bombshell report on the entire Afghanistan war being a lie and frankly I don’t know if I can handle that right now,” popular Youtube commentator Kyle Kulinski tweeted today.

The post was just one of the many observations that Kulinski tosses into the Twitterverse every day, presented in his typical casual, offhand way without any self-significance. But if you actually pause and think about what he’s saying here, how true it is and what it says about the mass media institutions which people rely upon to form their worldviews, it’s actually a damning indictment of our entire society.

It is a fact that far more news media energy is going into one trivial aspect of an impeachment agenda that will with absolute certainty fail to remove Trump from office than there is for the known fact that the US government fought to suppress indisputable proof that American officials have been consistently lying about an 18-year military occupation which continues to this day. This fact should, by itself, be sufficient to completely discredit the mainstream press. This one tiny piece of information, that there’s vastly more buzz about an irrelevant impeachment sideshow than there is over the Afghanistan Papers, should in and of itself cause everyone to regard the entire establishment media complex with the same amount of respect as it gives the Flat Earth Society.

But it doesn’t. People are so hypnotized by the endless drama of the mass media news churn that all context and sense of proportionality is lost to them. They stand transfixed by the latest kayfabe combat between the two puppets in America’s two-headed one-party system like an infant distracted from the cause of its outrage by a set of shiny, dangling keys.

The public’s total immersion in whatever sparkly clickbait drama gets served before them by the waiters and waitresses of corporate news media enables the narrative managers responsible for manipulating public thought to simply pace mainstream attention away from inconvenient news stories, even after reporting on those very news stories themselves the day before.

This ability to memory-hole attention away from inconvenient truths using the drama of the relentless news churn is the final line of defense for the establishment propaganda machine, and, much like a video game, they save the hardest boss fight for last. Even if a little truth manages to squeak past the wall of billionaire-controlled media employees who are conditioned to understand that they’ll only be able to advance their careers by promoting narratives which favor the establishment upon which those billionaires have built their respective kingdoms, even if that truth then squeaks past the steadily thickening walls of government secrecy, past the increasingly overt infiltration of media organizations by powerful government agencies, and past the empire’s increasingly aggressive war on oppositional journalism, it still has to face the final boss fight of news churn memory-holing. And boy, it’s almost unbeatable.

A lot of dissident-minded optimists got hopeful that maybe once the lies of the Iraq war were exposed, people would lose trust in the political/media class which deceived them about such a massively significant atrocity. These hopes were of course dashed as public attention was simply paced on to the next new, shiny thing, and then on to another and then on to another, and on now to the point where everyone’s babbling about impeachment over some political shenanigans with Ukraine and Joe Biden without hardly anybody bellowing in unmitigated rage that this same party refused to impeach Bush over mountains of literal war crimes. There is no actual correlation between a story’s newsworthiness and the amount of news coverage it ends up getting, so the still earth-shakingly consequential repercussions of Bush administration’s malfeasance have been eclipsed by today’s set of sparkly keys.

This infuriating tactic has been employed time and time again against inconvenient truths which miraculously managed to surmount the many other roadblocks which obstruct people’s understanding that they do not live in a free or just society but a murderous, oppressive and exploitative one. They are able to employ this immensely crucial strategic advantage because the social engineers whose employers benefit from the status quo don’t just work to manipulate information, but narratives as well.

It doesn’t matter how much information gets leaked to the public by whistleblowers, how much information the public gains access to via successful Freedom of Information Act requests, how much information is brought to public attention by investigative journalists combing through documents to connect the dots on the behavior of the powerful, as long as the establishment can manipulate or suppress any narratives that might get told about that information. No matter how much truth gets exposed about the depravity of the powerful, it won’t make one drop of difference in terms of public accountability if nobody’s talking about it. We see this in the way narratives still depict Trump as a Russian stooge despite the information about his many reckless escalations against Russia being publicly available, we see it in the way mainstream media is suppressing all discussion about the OPCW scandal, and we are now seeing it in the way the Afghanistan Papers are being memory-holed despite their temporarily featuring as front-page mainstream news.

This is all proof that simply getting information published isn’t enough. As important as whistleblowers, investigative journalists and leak publishing outlets like WikiLeaks are, by themselves they’re completely impotent, because all they do is reveal information while leaving the control of the dominant narrative in the hands of the establishment spinmeisters. There is no truth that could possibly be exposed that is so damning and so salacious that it couldn’t be manipulated away by establishment narrative control.

This doesn’t mean there’s no hope of ever awakening a critical mass to the fact that they live in a society which is ruled by oligarchs who benefit from keeping everyone else poor and powerless and profit from deceiving us into sending our children overseas to murder other people’s children. All it means is that we need to approach the problem with a very specific focus. It isn’t enough to simply expose the truth; we need to expose the truth while forcefully driving home the message that the media organizations which people rely on to form their entire understanding of the world have been deceiving them.

How To Defeat The Empire

"What I do advocate, in as many different ways as I can come up with, is a decentralized guerrilla psywar against the institutions which enable the powerful to manipulate the way ordinary people think, act and vote."https://t.co/4F5dWaURdq

Yes, expose the truth, but do it while also saying “Look! See? This proves that the mainstream media have been lying to you this entire time! They lie to you about everything!” Drive this point home constantly, as often as possible. The propaganda machine is only able to manipulate people away from inconvenient truths when people trust it; if you can weaken their trust in the plutocratic media and the political class which regurgitates their narratives, you will cripple the machine’s ability to manipulate them in that way.

It’s not enough to simply expose the truth. You must also fully, repeatedly and consistently expose the ones who are telling lies.

This is simply a matter of an adjustment of focus. Far too many truth-tellers think it’s enough to keep their energy close to their chests and mildly speak truths as correctly as they can into the information ecosystem. This is like being in a cage fight and thinking it’s enough to simply have a good fighting stance. We are being attacked by an enemy who seeks to destroy our ability to understand and respond sensibly to our world, so we need to fight back. We need to be moving our feet and ducking and weaving and throwing strikes in combinations, not just standing there with a textbook-perfect fighting posture.

It’s not enough to be right, we’ve also got to win. We win by pouring our energy into sowing distrust in the establishment propaganda machine, mocking it, ridiculing it, showing everyone how absurdly phony it is, until everyone’s laughing at it and treating it with the same amount of deference that they give to flat-earthers. When we’ve accomplished that, that’s how we’ll know that we’ve won. And from there it will be possible to build a healthy world based on truth.