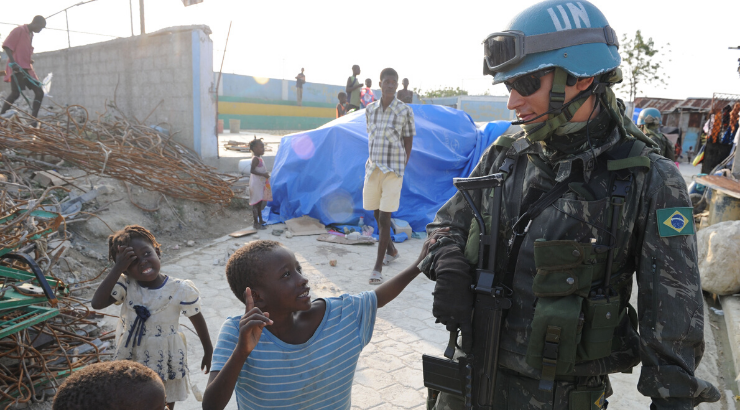 United Nations (UN) peacekeepers charged with protecting disaster-struck Haiti have fathered hundreds of babies with local women and girls before leaving them behind in poverty, according to a new study.

A paper published by the University of Birmingham’s Sabine Lee and Queen’s University’s Susan Bartels describes the experience of those people living under the protection of a UN Stabilisation Mission in Haiti (MINUSTAH).

The studies were based on conversations with over 2,500 Haitians who shared the experiences of women and girls in the communities that hosted peace operations. Of the 2,500 talked to, about ten percent revealed stories about peacekeeper-fathered children.

Girls as young as 11 were allegedly sexually abused and impregnated by peacekeepers and left “in misery” to raise their children alone.

The children, dubbed colloquially as “Petit MINUSTAH”, “bébés casques bleus” (blue helmet babies), or “les enfants abandonnés par la MINUSTAH” (the children abandoned by the MINUSTAH) suggests the children will struggle for the unforeseeable future with a label they had no control over.

The UN mission in Haiti, one of the UN’s longest peacekeeping deployments, has been riddled with controversy. MINUSTAH was already linked to a sex ring in Haiti in which 134 Sri Lankan peacekeepers exploited nine children in a sex ring from 2004 to 2007. Prior to that, Nepalese soldiers inadvertently introduced a cholera outbreak that reportedly claimed 10,000 lives following the major 2010 earthquake event.

In June of this year, Oxfam lost thousands of donors after it allegedly covered up an investigation into staff who had been accused of having paid for sex while working in Haiti in 2010.

The MINUSTAH has also been accused of gang rape, the rape of a mentally challenged 14-year-old boy, exploitation and unexplained deaths, torture, and unfortunately more.

Historians may also recall that United States Marines occupied Haiti from 1915 to 1934, with U.S. interference in the country continuing up until the present day. Under the leadership of Bill Clinton, the U.S. led a military operation dubbed “Operation Uphold Democracy” into Haiti to remove the military regime that took over following the 1991 Haitian coup d’etat. It is also worth noting that both Bill and Hillary Clinton have a long and controversial relationship with the Caribbean nation.

At the time of writing, the UN has not responded to media requests for comment.